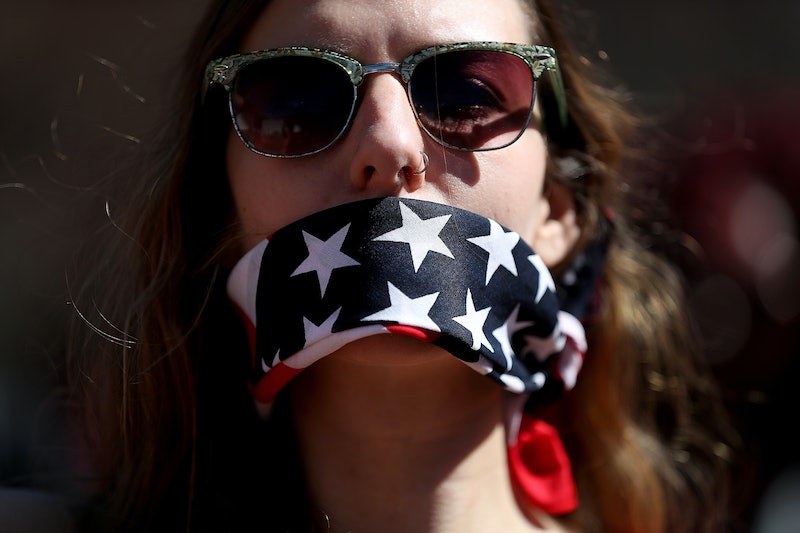 It's hardly shocking to say that the Trump administration has a woman problem. And not in the way that some people in the White House would take that, which is to say that women are a problem. We're obviously not talking mid-20th century levels of sexism and oppression here; that said, the many forces working against women and their rights continue to be propped up under the current administration.

It's unfortunate that, in 2017, women are still not in control of their own bodies. In addition, women's opinions continue to go undervalued, women are not given equal opportunity to advance and succeed, and women are still told by male representatives that they know better what women need from government. And it's particularly jarring after the strides made under the previous administration's more feminist agenda.

The good news is that these attempts to stifle our rights has made women stand up and be heard in a manner and volume that hasn't been seen in decades — just look at the enormous scale of the Women's March in January. Unfortunately, however, its those in the seat of power that make the decisions. And while women are fighting to reach those places of power, it would seem that those who currently occupy it are working to keep government influence out of female reach.

Proof? Here are just a few of the ways the Trump administration has attacked women in 2017.

Planned Parenthood, an organization that provides health and medical services for women, many who are low-income, has long been vilified because they provide affordable abortion services, which the pro-life crowd is none too happy about. The Trump administration quickly took up the years-long fight of conservatives to defund the health organization.

Planned Parenthood can afford to offer a sliding scale to patients based on their income, due in part to Title X funds allocated by the government. The Title X Family Planning Program exists to subsidize organizations that offer services related to contraception, pregnancy care, fertility and cancer screenings primarily for low-income people. An Obama-era rule barred states from withholding Title X funds from organizations that provide abortions, but a bill narrowly passed in April did away with that provision, essentially giving states the freedom to "defund" Planned Parenthood if they feel so inclined.

It was clear on November 10, when control of the incoming White House, Senate and House of Representatives were all won by Republicans, that President Obama's signature legislation, the Affordable Care Act, would be moved swiftly to the chopping block. Trump's proposed health care replacement plan, the American Health Care Act, rolled back many of the provisions of the ACA that finally made essential women's health care part of the norm, and not viewed as an added expenditure that they should have to pay extra for.

Things like maternity coverage or birth control, which were determined to be essential benefits under the ACA, and therefore mandated to be made available in every marketplace health plan, were no long compulsory under Trump's plan. To insist that maternity coverage be something that women only need to pay for is so fundamentally misguided, I'm not even sure what to call it.

3. Reinstatement Of The Global Gag Rule

The Mexico City Policy, colloquially referred to as the Global Gag Rule, is a federal rule, yet it actually impacts women around the world. It's the international version of the Hyde Amendment — the domestic policy that bars federal funds from being used for abortions.

The rule prohibits international NGOs from receiving American funds if they not only provide abortions, but even speak about them with patients, or merely provide pamphlets on the subject. Even in countries where abortion is legal. The United States is the top contributor to international aid groups, and many small NGOs rely on that government money to fund their operations. Therefore many feel trapped to comply with the gag rule to keep their operations afloat, but in turn they can't provide essential services to women in need around the globe.

The Global Gag Rule is nothing new — it was enacted by Ronald Reagan in 1984, and has been renewed or reinstated by every Republican president since, but the problem this time is that international women's health experts said that so much progress had been made during the Obama years, that having to rollback services, either in defiance of the gag rule, or simply in compliance of it, would be detrimental to women's health services worldwide.

Under Obama, service in the five branches of the U.S. military were opened up to openly-transgender people, an advancement for LGBTQ rights. There are thousands of transgender service members currently serving, putting their lives at risk for a commander in chief that doesn't value their service and sacrifice.

It's hard to feel that your country cares about your safety or right to go to work without being harassed when your Attorney General has made statements undercutting the seriousness of a man grabbing a women's genitals, and the Secretary of Education is actively rolling back provisions meant to help college campuses deal with incidences of sexual assault.

Trump's first budget, released in May, was controversial for a number of reasons. It slashed funding to many government programs that are largely seen as essential to our society; one in particular being WIC. The Women, Infants and Children program provides money for food for low-income women and their children, and Trump proposed cutting $200 million from the benefits program.

It goes back to the argument that it's hard for Trump, and conservatives in general, to stand behind his pro-life identification when he would take food from children's mouths, while increasing military funding with the same swipe of his pen.

In March, Trump revoked the 2014 Fair Pay and Safe Workplaces act, which was a victory for the Obama administration in ensuring that federal contracts were awarded to companies that were operating in an ethical manner. Without this law in place, federal contractors no longer have to report safety violations or accusations of hiring discrimination, things that keep an employer in line and from exploiting its workers, or promoting unsafe working conditions.

For women workers specifically, the act included directives on paycheck transparency, and a ban on forced arbitration clauses for sexual harassment, sexual assault or discrimination claims, which are commonly used to keep these claims out of the courts and off the public record. Doing away with this law means that women's rights and interests are left unprotected in the workplace, and even worse, in the tax-payer funded workplace.

After reading this list, I'm sure it's hard to feel hopeful about the future for women under the Trump administration. But the important thing is that these attempts to limit women's rights and make work, personal and family life more difficult are not being ignored, or passed quietly in the night. There is a strong chorus of voices speaking out against these actions, and that is what will ensure that things don't continue to get worse for women in America.