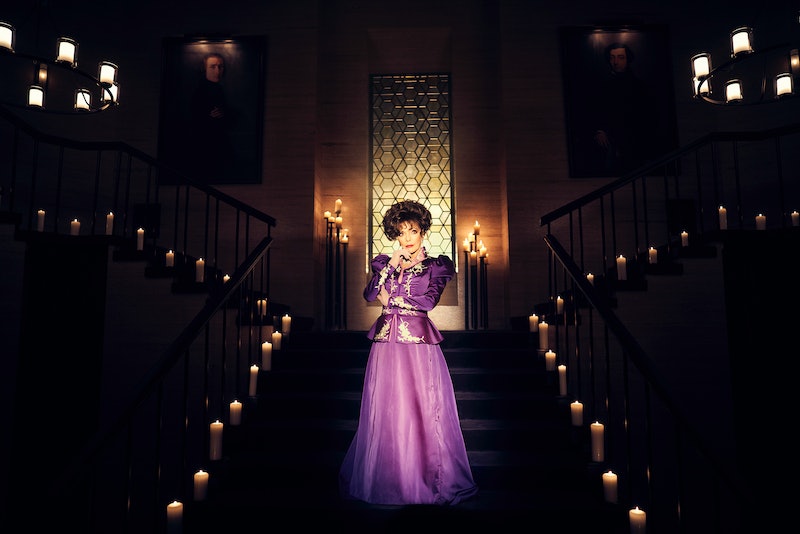 There's enough going on in the eighth season of FX's anthology series to keep your eyeballs occupied on a first pass through each episode. Gay warlocks, bitchy witches, Satan-worshiping androids, Stevie Nicks herself... it's a lot. But there's even more going on underneath the surface of American Horror Story: Apocalypse — pop culture references that make the show even more fun when you catch them and make you want to go through every episode with a fine-toothed comb.

Of course, the fact that the man behind such pop culture-soaked series as Popular and Glee would imbue his campy-gothic-horror show with references probably shouldn't come as a surprise. And the references on display in Apocalypse have varied from the overt to the cleverly hidden. It's likely that no one has even caught all of the references Murphy made in Season 8 yet, but even a non-exhaustive list is still impressive. It's a list that contains everything from horror films (natch) to daytime TV soaps, action movies, sci-fi classics, and even 2010's Sexiest Man Alive™.

Did you catch all of these references? Take a look at this list, and then rewatch Season 8 to see if you can find even more...

When Joan Collins' Evie Gallant was first introduced in the season premiere, she had a line about her champagne being "burnt." For Dynasty fans, this was a hilarious shout-out to one of the actress' most iconic lines — and one of the most iconic scenes in daytime television history, in which Collins' character Alexis Carrington Colby was on the receiving end of a similar barb during an epic diva-off.

When Wilhelmina Venable fed Andre's hapless boyfriend to the residents of Outpost 3, fans of the cult classic musical The Rocky Horror Picture Show may have felt a twinge of nostalgia for that film's similarly cannibalistic dinner scene. (The hilarious cry of "The stew is Stu!" could also be considered a reference to the iconic final line of Soylent Green, in which Charlton Heston declares: "Soylent Green is people!")

In Outpost 3, the captives — including Evan Peters' Mr. Gallant — are tortured by a record player that only plays the same song on repeat over and over and over again. Funnily enough, that song is Jim Croce's folk tune "Time In A Bottle," which also soundtracked another scene featuring Evan Peters: the iconic Quicksilver sequence in X-Men: Days Of Future Past.

When it was revealed that Kathy Bates' Miriam Mead was an android, the character was bleeding milky goo from a gunshot wound to her abdomen. The idea of androids having a milk-white substance instead of blood is a pretty clear call-out to the classic sci-fi horror movie Alien, in which Ian Holm's scientist is also revealed to be a sentient robot who bleeds opaque goop.

"The fetid stench of unwashed boy; it makes Bourbon Street smell like Chanel No. 5." Myrtle Snow's quippy remark upon entering the Hawthorn School for warlocks is a clear reference to Murphy's other horror show, the short-lived cult favorite FOX series Scream Queens. Sure, Myrtle is simply describing a classic perfume — but the fact that the writers picked that perfume (the nickname of one of the minions of Emma Roberts' character) can't be a coincidence.

In the season's most overt pop culture reference, legendary Fleetwood Mac singer Stevie Nicks appeared as herself and sang one of her own tunes: "Gypsy," a 1982 single from the band's album Mirage.

The entirety of Season 8 could be viewed as a reference to The Omen, given its storyline of the literal Antichrist, a boy who bears the "666" mark. But there was a specific callback to the classic horror film in the "Return To Murder House" episode, when Michael Langdon was recruited by a group of Satanists. As she sacrificed an innocent young woman to Michael, one of the Satanists called out, "It's all for you!" — the exact words uttered by the Antichrist's nanny in The Omen before she "sacrifices" herself by hanging.

If one specific Omen reference wasn't enough, the penultimate episode of the season contained another, in which Michael Langdon comes up with his plan to take over the world while watching the much-maligned third entry in the franchise.

The penultimate episode of the season also contains an amusing running joke in which people confess they've sold their soul to Satan for the chance to have sex with People's Sexiest Man Alive from 2010, Ryan Reynolds. (Reynolds himself has a background in horror, having starred in the 2005 remake of The Amityville Horror.) Having already appeared this year in Deadpool 2 and the Detective Pikachu trailer, how many minds would be blown if Reynolds popped up unexpectedly as himself in the Apocalypse season finale?

Stay tuned for Reynolds — or any other pop culture references — when Season 8 ends with "Apocalypse Then."