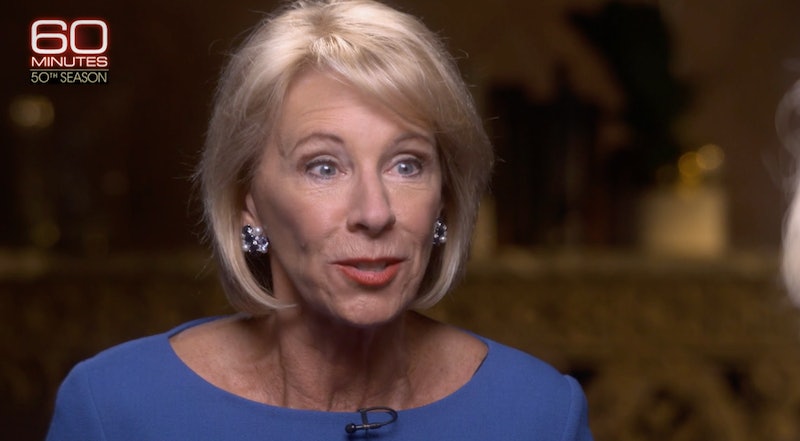 The most controversial cabinet secretary of the Trump administration spoke with CBS News' 60 Minutes to explain her stance on the state of public schools in the country — particularly gun control, following the shooting in Parkland, Florida. But Education Secretary Betsy DeVos' quotes from her interview still show she holds a point of view that does not align with what student activists or many education experts are pushing for.

Speaking with journalist Lesley Stahl, DeVos was open to the arming of teachers, argued federal investment in public education was without results, and admitted never having "intentionally" visited failing schools.

Following her interview, she was met with a response on social media that was extremely negative, critiquing the positions that she took. "I thought that Betsy DeVos interview was an episode of Drunk History but turns out she's the Secretary of Education," tweeted Clint Smith, a writer and Harvard Ph.D. candidate studying education inequality. That was on top of the criticism she faced for visiting Marjory Stoneman Douglas High School, where the February school shooting took place.

"Betsy DeVos came to my school, talked to three people, and pet a dog," one student wrote afterward. "You came to our school just for publicity and avoided our questions for the 90 minutes you were actually here," added another on Twitter.

Here are some of the quotes from DeVos that clearly left many viewers puzzled.