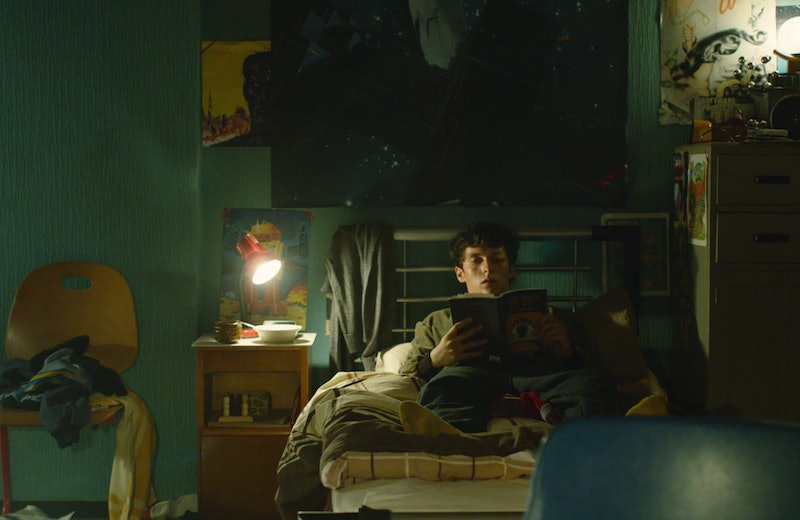 Spoilers ahead for Black Mirror: Bandersnatch. It’s been a long, decision-filled Friday, hasn’t it, Bandersnatch heads? Some Black Mirror: Bandersnatch memes and tweets about how difficult it can be to make even the simplest of choices in the stunning “choose your own adventure” movie are probably just the thing you need. Er, they're definitely just the thing you need, so go ahead and give them a look. (See what I did there? I arrived at your decision for you. That's one less choice you have to make today. You're so very welcome.)

Set in the '80s, Bandersnatch tells the story of a programmer named Stefan who is working on a video game based on a "choose your own adventure" book titled Bandersnatch. Stefan's actions are controlled by you the viewer, and even the smallest of decisions can impact his day. And like, those decisions seriously impact his day. You make one wrong move when selecting some tunes for Stefan's morning commute, and before you know it — seriously though, stop right now if you haven't played/watched and don't want to read any spoilers — Stefan's dad is dead and you need to figure out what to do with the body. That isn't hyperbole. There are multiple endings where Stefan winds up in jail for killing his father. So uh, no pressure.

Yes, Bandersnatch can be sort of a nightmare for anyone who buckles when faced with a question as simple as what do you want for breakfast? But it's also really spectacular. Spectacular and so incredibly stressful.

But Seriously, What Do You Want For Breakfast?

As if "choose a cereal and choose wisely because your choice could ruin both your day and your life" wasn't enough to deal with, you also only have 10 seconds.

So What'll It Be?

Try to not get beads of sweat in your milk.

The Clock Is Ticking

Sigh. If only there was a "CEREAL" button on your graphing calculator.

No Big Deal, It's Just The Most Important Meal Of The Day

If You're Nervous About Cereal, You're Doing It Right

Oh, and the cereal is only the first of many choices.

Oh, And You're Probably Going To Make A Lot Of Wrong Choices

This game/movie is one meltdown-inducing fork in the road after another.

And Sometimes The Two Available Choices Don't Seem Like Enough

But then you remember that the less options you have to deal with, the better.

But Do You Ever Give Up On Stefan's Story? No Way

For better or for worse, you keep on trying to finish Stefan's journey. (More often than not, it sure feels like a "wow this couldn't be more for worse" situation.)

And Yes, You Feel Bad About It

And here you thought a night out on the town with that game designer Stefan admires so much would make for a chill and fun evening. Live (and die) and learn... and try it all over again.

But Eventually, You Give In To The Bandersnatch

You'll get 'em next time. Or maybe you won't. Can't decide.