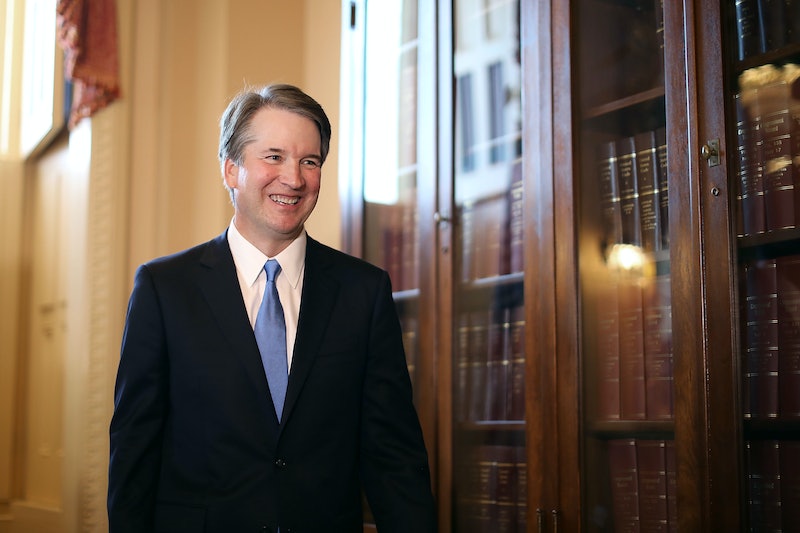 Following the Supreme Court nomination of Brett Kavanaugh, questions have been swirling about Kavanaugh's positions on everything from abortion to net neutrality. But what about executive power — and particularly, the powers of a president currently under investigation for colluding with a foreign government? If history is any indicator, these quotes show that Kavanaugh's opinions on presidential power are good news for Trump.

After graduating from Yale Law School, Kavanaugh cut his teeth as a young lawyer working in the thick of Republican politics in the Clinton era. He worked on an investigation of the death of President Clinton's deputy council, Vincent Foster, concluding that Foster had in fact killed himself. He also set up the impeachment case against Clinton, following the president's widely publicized affair with Monica Lewinsky.

At the time, Kavanaugh took a hard line in condemning the affair and Clinton's subsequent perjury. "The President has disgraced his Office, the legal system, and the American people by having sex with a 22-year-old intern and turning her life into a shambles — callous and disgusting behavior that has somehow gotten lost in the shuffle," he wrote in a memo. "He has committed perjury. . .  He has tried to disgrace. . . this Office with a sustained propaganda campaign that would make Nixon blush."

There are notable parallels between Kavanaugh's assessment of Clinton's behavior, and the biggest headlines of the Trump presidency so far — numerous sexual harassment allegations against the president, all which he has strongly denied, Trump's frequent lies, as well as the steady flow of propaganda used to discredit the media and opponents of his administration.

However, in 2009 Kavanaugh appeared to backtrack on his positions a bit, arguing against "time-consuming and distracting" civil and criminal lawsuits against a sitting president in a Minnesota Law Review article. Here are a few more of Kavanaugh's opinions over the years that might give some insight into how he could potentially rule in the future (and why Trump might have tapped him for the bench).

On Prosecuting The President

I believe that the President should be excused from some of the burdens of ordinary citizenship while serving in office. We should not burden a sitting President with civil suits, criminal investigations, or criminal prosecutions.

- "Separation of Powers During the Forty Fourth Presidency and Beyond," by Brett Kavanaugh, Minnesota Law Review, 2009

In this law review article, Kavanaugh argued that the pressures of the presidency are unimaginable and relentless, and that legal investigations are an unnecessary distraction that would cause the subject to "almost inevitably... do a worse job as President."

He even admits that his dogged approach to the Clinton investigation was a mistake, and that President Clinton would have been better off focusing on Osama bin Laden than embroiled in Paula Jones' sexual harassment lawsuit.

If the president does something dastardly, the impeachment process is available.

- "Separation of Powers During the Forty Fourth Presidency and Beyond," by Brett Kavanaugh, Minnesota Law Review, 2009

The Constitution defines grounds for impeachment as "treason, bribery, and other high crimes and misdemeanors." Still, it's unclear what Kavanaugh considers "dastardly", and how that could align with a potential indictment against the president as a result of the Russia investigation.

Whether the Constitution allows indictment of a sitting President is debatable.

- The President and the Independent Council, by Brett Kavanaugh, 1998

Kavanaugh argued that Congress should not pass a law saying definitively that the president can indicted. In fact, he said he supports removing the possibility of presidential indictment, because it would expedite investigations and allow for Congress alone to judge the president's behavior.

On Making A Conviction

Impeachment and then conviction take into account more than just the facts.

According to The Washington Post, Kavanaugh supports interpreting the Constitution as it was written, but has been known to make more pragmatic rulings from time to time. Could a presidential impeachment be one of them?

Democrats like Sen. Cory Booker have argued against a Supreme Court justice nomination while President Trump remains under criminal investigation in the Mueller probe, saying in a statement to Politico that there's a "clear conflict of interest inherent in the President installing someone who could be the deciding vote on a number of potential issues from that investigation that could come before the Court." Kavanaugh, if appointed, could end up deciding on issues such as whether the president can be subpoenaed to testify in a criminal case, Trump's power to fire Mueller, and whether or not he can pardon himself if convicted.

In his nomination acceptance on Monday, Kavanaugh said judges "must interpret the law, not make the law." It's too soon to tell, but this SCOTUS nominee's history of supporting executive power suggests good news for Trump.