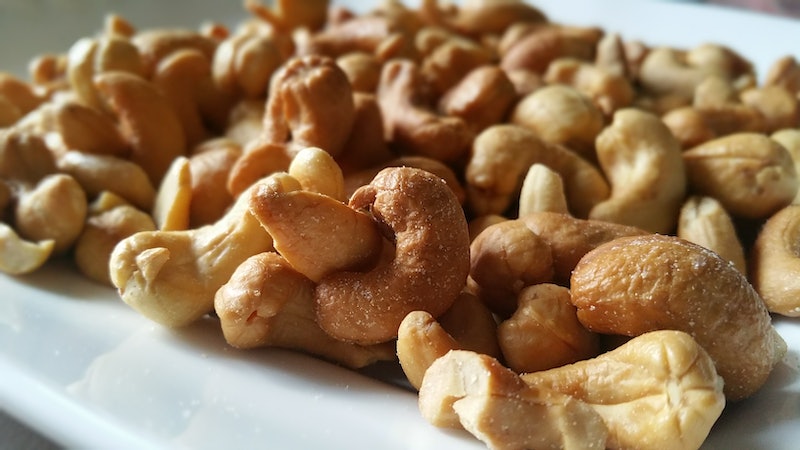 If you had plans with Netflix and an inadvisable amount of macadamia nut cookies this weekend, you may want to cancel. The Food and Drug Administration (FDA) has announced that certain brands of cashew and macadamia nuts are being recalled for possible, unrelated listeria contamination in ten states, and trust me — listeria is not the kind of thing you want interrupting your cookies-and-Netflix date. Fortunately, no illnesses have been reported so far.

According to the FDA, the Kroger Co. announced the recall of its Simple Truth Dry Roasted Macadamia Nuts on May 24. The recalled nuts were sold at Kroger, Bakers, Gerbes, and Dillons stores in six Midwestern states: Ohio, Indiana, Kentucky, Kansas, Nebraska, and Missouri. The product comes in a 12-ounce, clear plastic package marked with an expiration date of May 2, 2018, and the UPC is 11110-02478. Kroger has taken the macadamia nuts off the shelves and begun notifying customers, who can return them for a replacement or refund.

In an unrelated case, Ava's Organic Cashews Roasted & Salted have also been recalled for possible listeria contamination. The eight-ounce tubs, which have a sell-by date of Apr. 28, 2018, were sold in New Jersey, New York, Pennsylvania, and Connecticut. The UPC is 8-10111-01035-1, and the lot number is 11817-L2. According to the FDA's press release, Hampton Farms recalled the cashews after being notified of a contaminated piece of equipment at their supplier's facility. Although none of Hampton Farms' cashews tested positive for listeria, the company pulled the item from shelves out of an "overabundance of caution."

According to Hampton Farms, fewer than 225 units of the cashews were available for sale before the recall. Customers can return them for a full refund.

Although no illnesses have been reported yet related to either recall, listeria can be a serious infection. According to the Centers for Disease Control & Prevention (CDC), it's usually caused by eating food contaminated with the bacterium Listeria monocytogenes. Symptoms depend on the person, but they can include fever, muscle aches, confusion, and headache. In pregnant women, the infection tends to manifest in flu-like symptoms, and it can lead to miscarriage. About 1,600 people are infected each year, and an estimated 260 die as a result. Pregnant women, infants, the elderly, and those with compromised immune systems are most likely to be infected.

This isn't the first time listeria has possibly contaminated a beloved food. Cheese lovers may recall that in March, the CDC investigated a listeria outbreak that infected eight people in multiple states; the contamination appeared to stem from raw milk cheeses distributed by a creamery in New York state. (In early May, the CDC reported that the outbreak appeared to be over.) In the past, listeria has also forced the recall of hummus and ice cream — clearly, Listeria monocytogenes is out to raid the contents of every twenty-something's refrigerator.

For more information on the macadamia nut recall, call 1-800-KROGERS. If you have questions about the cashew recall, call Hampton Farms at 413-732-4193 and press 0.