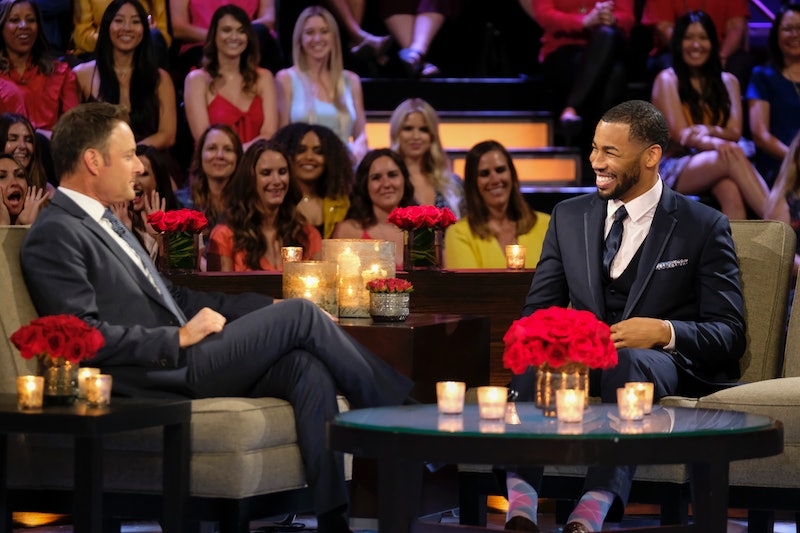 Bachelorette Hannah B. is mere weeks away from handing out her final rose, and Bachelor In Paradise has already wrapped up filming, so now it's time to set our sights on what's next: The Bachelor. There are many men in Bachelor Nation who would be perfect for the gig, but ultimately, only one of them will get it. And so far, there are a lot of pretty convincing clues that the next Bachelor will be Mike Johnson.

Throughout Hannah's season of The Bachelorette, Mike was a damn delight. He was kind, respectful, emotionally mature, and didn't involve himself in the drama, but was more than willing to step in if Hannah needed some backup. It was clear he was genuinely looking out for her. Mike is also handsome and smart, making him a prime choice for a leading man...whether on TV or in your dreams.

Unfortunately, Hannah sent Mike home shortly before hometowns, which disappointed everyone — including Hannah’s parents. But Hannah’s loss is the rest of our gain, because Mike needs to go on to bigger and better things — like helming the next iteration of The Bachelor when it starts airing in January. And he might have a decent shot; here's why.

Mike has already expressed interest in being the next Bachelor, but he'd want to make sure it's the right thing for him. "I have lots of questions if I were going to be Bachelor. I take stuff like that very seriously," he told Entertainment Tonight. This is good, because it means that if he went on The Bachelor, it wouldn't just be to be on TV. He'd genuinely be looking for love.

He Can Handle The Chaos

Luke P. was the Tasmanian devil on Hannah's season, bringing chaos and drama everywhere he went. But Mike never got swept up in it, instead staying focused on his connection with Hannah. He stood up for her and for himself when it mattered, but knew when to step back too, which shows he'd be able to handle the drama a Bachelor season would inevitably bring.

Bachelor/ette host Chris Harrison's opinion counts for a lot, and he confirmed to People that Mike is in the running for Bachelor. "How could he not be a contender with that smile?" Harrison said. "He's one of my favorite people we've ever had on the show. He's a love of a man."

Fans & Celebrities Love Him, Too

Demi Lovato has been low-key flirting with Mike via Twitter and Instagram since his face started popping up on her TV, and who can blame her? Mike is a catch. And fans at home feel the same: they've been calling for him to be Bachelor for weeks. Listen to what the people want, producers! Please!

We Need Our First Black Bachelor

The lack of people of color on The Bachelor and The Bachelorette has been a problem since the show's inception. It's 2019, so how about we finally get the first black Bachelor up here, ABC? Rachel Lindsay was the first black Bachelorette, and diversity should be a continued priority for the franchise, not just a onetime thing. Mike's experiences are inherently different than those of a white Bachelor, and bringing him on the show would make The Bachelor better and infinitely more interesting than ABC choosing another white airline pilot. The world is diverse! Let's see that on TV, too.

Mike's Instagram bio says "Travel gives me humility," which is so profound and true. Travel allows us to see other places, cultures, and ways of life, and this mindset shows that Mike is open-minded and accepting of people from other places and cultures. Plus, The Bachelor does kind of involve a lot of globe-trotting, so it's good that he'd be comfortable with that.

Mike is unquestionably handsome, and who he is as a person only makes him more attractive.

It's too soon to say for sure who the next Bachelor will be, but Mike is definitely on the shortlist.