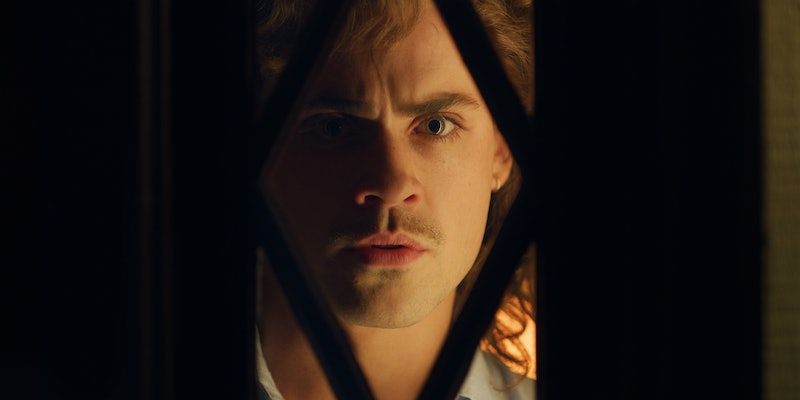 As per usual, the ending of the third season of Stranger Things left fans with a lot of questions, particularly when it came to the fate of both Hopper and Billy. Stranger Things 3 spoilers ahead. Many are already convinced that Hopper isn't actually dead, however, there are also a few notable clues that indicate Billy is still alive on Stranger Things as well, despite his seemingly fatal showdown with the Mind Flayer in the season finale.

Though he remained one of the central hosts of the Mind Flayer for the majority of the season, El's reference to a memory about his mother gave him the strength to fight back against the Upside Down creature and regain control of his body. It allowed him to heroically protect El from harm, though, it came at a cost. Billy was stabbed multiple times by one of the Mind Flayer's tentacles, one of which hit him directly in the chest. Before taking his final breath, Billy tells Max that he's sorry for everything he's done. Taking all of that into consideration, it certainly looks as though Billy is gone for good. But what if that's precisely what the writers want us to believe?

Strange things are known to happen on this show (heck, it even says so in the title!), so it's important not to rule any possibility out entirely. And if you look closely enough, you may start to realize all the clues that indicate that not all hope is lost for poor Billy.

Unlike all of the Mind Flayer's other hosts, Billy's body never morphs into whatever gross composition makes up the Upside Down monster's new form. That could suggest that Billy's connection to the creature was different than the others in some way, which means he might not have to succumb to their gooey fate.

The post-credits scene indicated that there was an "American" trapped in a Russian jail cell. Fans never see who it is, but while many think it's either Hopper or Dr. Brenner, it's also possible that it could be Billy. Could the remaining Russians in Hawkins have retrieved and revitalized his body after the mall attack? Viewers never see what happened to Billy post-mortem, which could be telling.

Sure, it looked as though the Mind Flayer was dead at the end, but viewers have been fooled by this notion before. What if part of the Mind Flayer still lives on in the Upside Down? And since Billy became an extension of the Mind Flayer, that could mean he too is still alive, even if it's just on a subconscious level. That could also be good news for everyone else who played host to the creature throughout the season.

Will Proved That Hosts Can Survive

Will managed to survive the Mind Flayer's control in Season 2, so what's to say that the same can't be done for Billy as well? His injuries were significant, but if treated in time there could still be hope.

His Death Was Too Predictable

As soon as he became a host, fans instantly assumed Billy's fate would be grim. But when has this show ever been predictable? If anything, his obvious death all but guarantees his return in Season 4.

Characters with B names don't tend to do well on this show, but there's a solid chance Billy will prove to be the exception to the rule.

More like this
'The Queen’s Gambit' Season 2 Tweet Wasn’t From Anya Taylor-Joy
By Mary Kate McGrath, Jack Irvin and Grace Wehniainen
Netflix Shut Down 'Bridgerton' S3 Rumours About A “Very Dark” Storyline
By Bustle
'Stranger Things' Finn Wolfhard Is “Proud” Of Noah Schnapp For Coming Out
By Sophie McEvoy
Twitter Simply Couldn’t Cope With The ‘Happy Valley’ Finale
By Sophie McEvoy
Get Even More From Bustle — Sign Up For The Newsletter
From hair trends to relationship advice, our daily newsletter has everything you need to sound like a person who’s on TikTok, even if you aren’t.