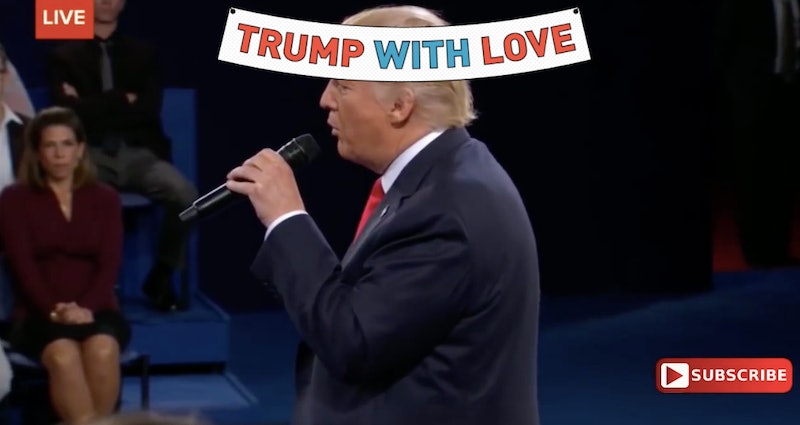 I don't know about you, but I've gotten to the point where even just seeing Donald Trump's face or hearing his voice elicits the beginnings of a gag reflex. But still, Trump saying nice things is something that I've never expected to see — so when it happens, I have to admit that I kind of can't look away. It's creepy because it's so blatantly impossible, and the dissonance is hilarious. Now, I don't mean to say that Trump has actually been saying nice things. A quick look at his Twitter feed reveals that he's pretty much up to his normal antics. However, there's a new player entering the game, just in time for Valentine's Day: Trump With Love.

I shudder to think about the sorts of wishes that the president himself will come out with on a day dedicated to the very kind of emotion that he seems to be so blind to, but now, in a small way, you can control it yourself. The good folks at Trump With Love offer you the chance to write your own message and then put it into Donald Trump's voice — which does sound kind of terrible, but still. Once you do it, you'll wonder how you lived without it for so long.

Maybe you want Trump to say something to your partner: "I love you so much and I want this to be the beginning of a long and happy life together." He can do that.

Or maybe you want something to send to your long distance best friend, telling her how excited you are about all your future travels together: "I miss you big league and I can't wait to go see more amazing places." He can also do that.

Or maybe you want to express something entirely different, like perhaps your desire to explore the wonders that a certain country has to offer: "I heard that Iran is a beautiful country and I would love to experience everything that there is to see and do there." Thanks to Trump, if you're American, you are currently banned from entering Iran. But thanks to Trump With Love, you can at least have the pleasure of hearing Trump say that exact sentence. Quote it! This isn't fake news, ladies and gentlemen.

Now, there are still a few bugs, and Trump's vocabulary isn't unlimited — although you probably could have guessed that already. I wouldn't suggest that you let Trump saying nice things stand in for all of the Valentines that you were planning on sending, but the videos that you create can at least be funny, slightly creepy supplements.