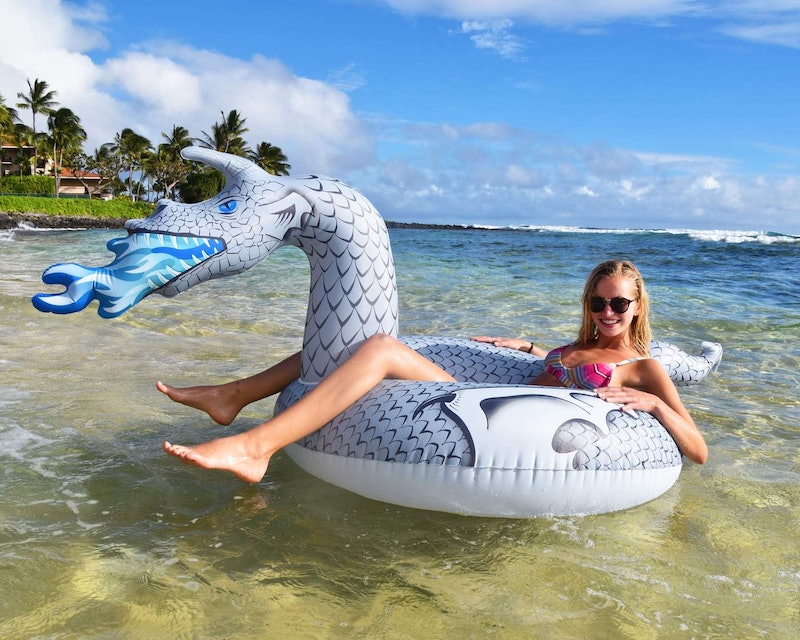 Game of Thrones might be ending soon, but its influence will live on forever. One very specific example of that? Game of Thrones pool floats. No, these don't allow you to float around on a likeness of Jon Snow or on the Iron Throne itself (though those probably do exist somewhere in the depths of the internet). But, these dragon pool floats are a way for fans to show their love for the series while floating around and mourning the fact that there's no more new episodes.

Now, to be clear, these pool floats are not actually official Game of Thrones merchandise, but the brand clearly does want GoT fans to associate them with the show. In its description, GoFloats explains, "Reign the iron throne this summer as King or Queen of the Dragons with the fun and affordable GoFloats Fire Dragon." Also, one dragon is called "ice" and one is called "fire." And there's a photo that says at the top, "Summer is coming. Choose your side!" So, yeah, they're "Game of Thrones pool floats" without technically being Game of Thrones pool floats.

There are several options available, for all sorts of fans of Game of Thrones, swimming, dragons, and cold beverages. Take a look.

Up next we have the Ice Dragon Pool Float with its gray and white scales and icy blue flames.

This one is meant for "proficient swimmers up to 100 pounds." As the site explains, "All swimmers ages 6-12 (up to 100lbs) can now train their dragon and reign over summer with the fun and parent approved GoFloats Dragon Party Tube Jr!"

This one is more intense. It's eight feet long, and according to GoFloats, it's "ideal for floating 2 adults or a bunch of kids." That's not so specific, but still a funny mental image. This float also comes with a bonus drink float.

The same as the giant ice dragon float, but green. According to the description it comes with the bonus drink float, too — as it should!

Whether you need more drink floats to go with your human float or just want a bunch of drink floats on their own, you can buy a three-pack of them separately in both ice dragon and fire dragon.

If winter activities are more your thing, GoFloats also has a dragon snow tube. Naturally, it's an Ice Dragon.

In addition to all of the floats and tubes above being available on the GoFloats site, some of them can also be purchased on Amazon.

Of course, while pool floats are seasonally appropriate, they are far from the only random Game of Thrones-related product out there. There are Game of Thrones socks, cookbooks, toilet decals (so your toilet can resemble the Iron Throne, obviously), and doorstops in honor of Hodor. Whether you want to float around in a pool post-GoT or hide out on your Game of Thrones-themed toilet while reading old Reddit threads, there's something for everyone to do once the show ends this summer.