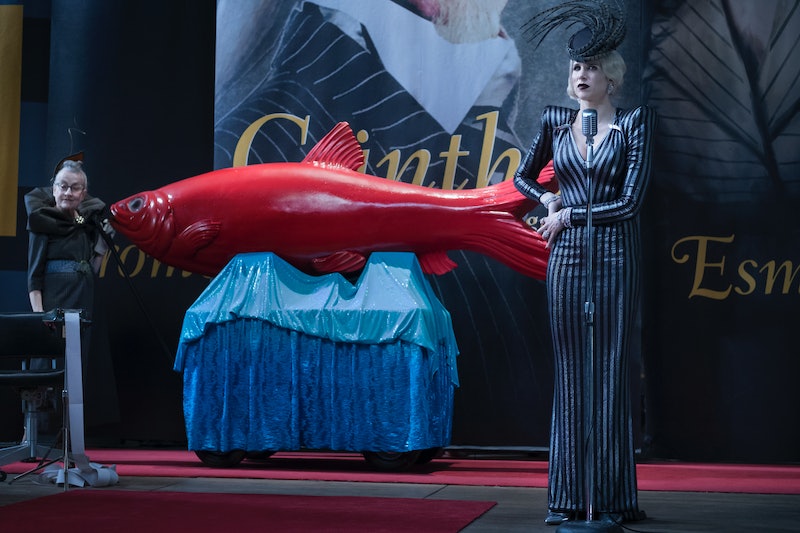 One of the most enjoyable things about Netflix's A Series Of Unfortunate Events for fans of Lemony Snicket's novels is that the secret organization operating in the shadows behind Violet, Klaus, and Sunny Baudelaire was introduced early on in Season 1. There are many hints and clues in the season that reveal loyalties, mysteries, and bits of information that reward bookish fans who learned Sebald code and wondered about Beatrice back in the day. That said, these Easter eggs in A Series Of Unfortunate Events Season 2 are not just for readers of the novels — there are a few meta moments that newcomers can enjoy as well.

Be warned, there are many spoilers for A Series Of Unfortunate Events Season 2 ahead. Do as the theme song says and "look away" until you've finished the new episodes.

As fans of the book have noticed, every other episode begins with a letter to the dearly departed Beatrice, just as each novel does. The opening credits this season include a few Easter egg hints about what's to come — a crainioectemy diagram, poison darts, and various blueprints for example. This is part of Lemony Snicket's investigation.

Check out the Season 2 Easter eggs below, and see if you can't discover more during the hiatus — a word which here means "an often undetermined amount of time between two bunches of television episodes."

At the end of the season, two of the Baudelaire orphans find themselves on a slippery slope — appropriate, as The Slippery Slope is the next novel/chapter/episode in their lives. Until A Series Of Unfortunate Events returns for Season 3, we'll have to parse — a word which here means "stream over and over so that more details reveal themselves" — these Easter eggs and clues in order to solve the mysteries themselves.