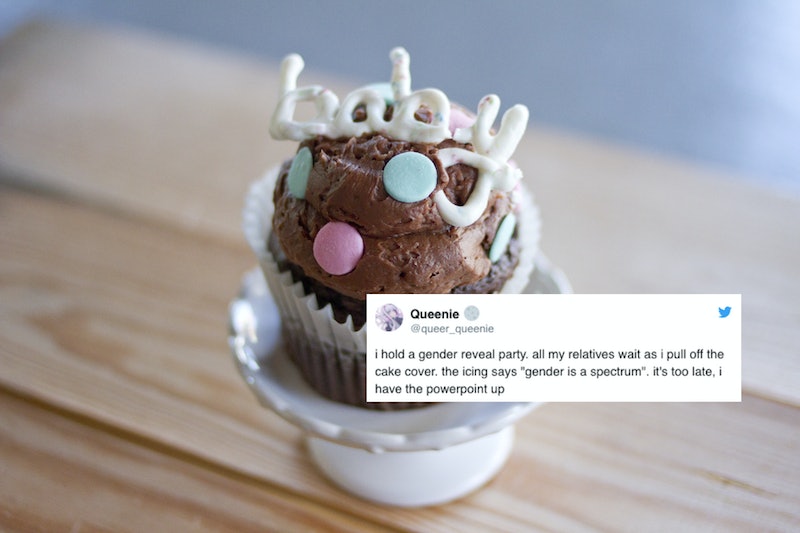 I'm not gonna lie: I have beef with "gender reveal" cakes. Primarily because they're actually sex reveal cakes, but also because they tend to be rife with stereotypes and, honestly, modern gender reveals are just generally kind of weird. For those who have yet to experience these heteronormative confections, buckle up. "Gender reveal" cakes have gone viral, but don't worry — it's for a pretty dang good reason.

Parker Molloy, a senior staff writer at Upworthy, seems to be the one that sparked the sweep of cakes across Twitter. She retweeted a post by Twitter user @ChurchCarlton that showed photos of "gender reveal" cakes, including cakes with slogans like, "Will it be a cupcake or a stud muffin?" and "Tractors or tiaras?"

"I don't understand what straight people think babies are," @ChurchCarlton captioned the tweet, which has since been like more than 50,000 times and retweeted nearly 200,000 times. "Gender reveal cakes are so unbelievably weird," Molloy added when she retweeted. Then Molloy, in a series of follow-up tweets, took a deeper dive into the world of "gender reveals," discovering cakes that were, yes, even weirder. "We're just here for the sex!" read a few, and then there's "What gender did Frank make?"

The sudden influx of "gender reveal" cake tweets inspired a Twitter Moment, and it's probably no surprise that the good folks on social media soon turned to thoroughly roasting the cakes she'd found. But social media users are also taking to the tweets to criticize more than bad frosting design and questionable slogans. Many are taking this viral moment to call attention to the fact that some cakes indicate parents are pressing their kids into stereotypes before they're even born.

People are also pointing out that reveal cakes reinforce a binary system of both sex and gender, neither of which are binary.

And some are indulging in a little ironic Eldritch horror.

Writer Julia Pelly grappled with being feminist and the idea of "gender reveals" back in 2016, saying on the blog Parent Co., "These parties, while sometimes cute, have always grated at my feminist consciousness —why act as if a baby’s genitalia has anything to do with who they’re going to be? Why begin stereotyping and putting kids into a box before they even arrive and why, just oh my gosh why, would you bring guns to something about babies?"

Jessica Winter, writing for Slate, theorized that things like gender reveals help contribute to transphobia. "[I] doubt it’s a total accident that 'gender-reveal' collapses the discrete concepts of sex and gender into one big face-mash of tasty cake," she wrote. "In fact, the gender-reveal phenomenon pulls off a rousing counter-progressive two-for-one: weapons-grade reinforcement of oppressive gender norms (sorry, feminists!) and blunt-force refusal of the idea that sex assigned at birth does not necessarily equate with gender identity (sorry, trans-rights movement!)."

She added, "A gender reveal will tell a future baby’s loved ones precisely nothing about what is actually important."

Look. I get it. Finding out the sex of your baby is super exciting. The moment someone finds out you're pregnant, that's usually their first question. But as a trans person, seeing my various high school friends post their "gender reveals" has always made me vaguely uncomfortable. I know revealing the sex of your incoming child to your friends and family is a time-honored tradition, and I know if I were pregnant, I'd probably want to find out for the sake of sheer curiosity. But "gender reveals" make it seem like the most important thing about an incoming child is its sex, and they reinforce the idea that "Boy or girl?" is the first question we should be asking of someone — not only when a person is pregnant or when a baby is born, but forever.

More like this
On TikTok, Tinned Fish Date Night Is The Latest Viral Food Obsession
By Emma Carey
The 19 Best Tweets & Memes About Bisexual Awareness Week
By Lexi Inks
Why TikTok Is Flooded With Controversial Videos About "Pick Me Girls"
By Courtney Young
This TikTok Song About An Unrequited Romance Has FYPs In Shambles
By Emma Carey
Get Even More From Bustle — Sign Up For The Newsletter