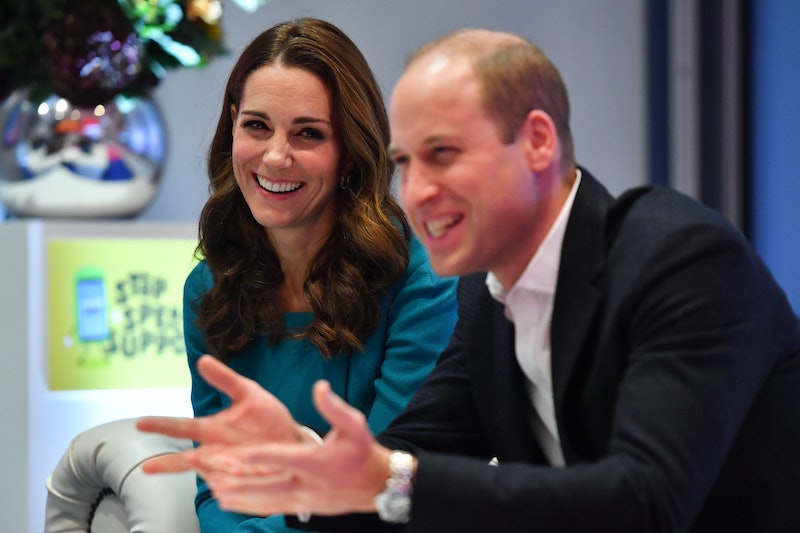 Like any normal couple, the future King and Queen of Great Britain, aka Prince William and Kate Middleton, like to celebrate the holidays with some fun gift exchanges. While the British royal family is known for having different rules about gift-giving, there is apparently one Christmas gift Prince William gave Kate Middleton that is as meaningful as it is spectacular. But, of course, it's not the only gift the couple has exchanged over the years.

For their first Christmas together as a married couple in 2011, William reportedly gave his new bride a wonderful present. According to Hello Magazine, the Duke of Cambridge gave Middleton a pair of green amethyst earrings made by her favorite jewelry designer, Kiki McDonough. While there's no confirmation that it was actually a Christmas gift, the Duchess of Cambridge debuted the new set of earrings during a Christmas Day church service leading many to believe that it was indeed a recent present.

Since the royal family is rather private, it is hard to pinpoint exactly what gifts the Duke and Duchess of Cambridge have exchanged for Christmas. However, that doesn't mean that every gift they've exchanged, for the holidays or otherwise, has been kept as mum.

A couple of the presents that William gave his wife honored some very special moments in their lives. After the births of their children, Prince George and Princess Charlotte, the Duke of Cambridge presented the new mom with a push present. According to Harper's Bazaar he gave Middleton a new eternity band upon the birth of George. As for Charlotte, the publication reported that he gave her a pair of tourmaline, amethyst, and diamond earrings.

It was widely believed that a citrine ring that Middleton sported at Prince Harry and Meghan Markle's wedding was a push present given to her by William after the birth of their third child, Prince Louis. But, as The Sun noted, the rumor was dispelled after the publication noticed photos of Middleton wearing the ring in 2008.

William has also given Middleton a very sentimental gift upon the couple's third anniversary back in 2014. According to Shape, the Duke gave the Duchess a Ballon Bleu de Cartier watch. To match the royal's sapphire engagement ring, that was originally the engagement ring given to Princess Diana from Prince Charles, William embedded the watch with a sapphire stone.

Not only was the gift just an overall lovely one in honor of their anniversary, the watch also offers up a special connection to William's late mother. As PopSugar noted, Diana frequently wore a Cartier watch herself, which was a gift from her father John Spencer. The publication also reported that the Princess of Wales got her son his very own engraved Cartier watch as a birthday present one year. So, there's definitely some strong symbolism behind the gift.

So, while there haven't been many details released about the Duke and Duchess of Cambridge's holiday gift exchanges, it's clear that William has a penchant for giving Middleton some pretty fabulous presents for other occasions.