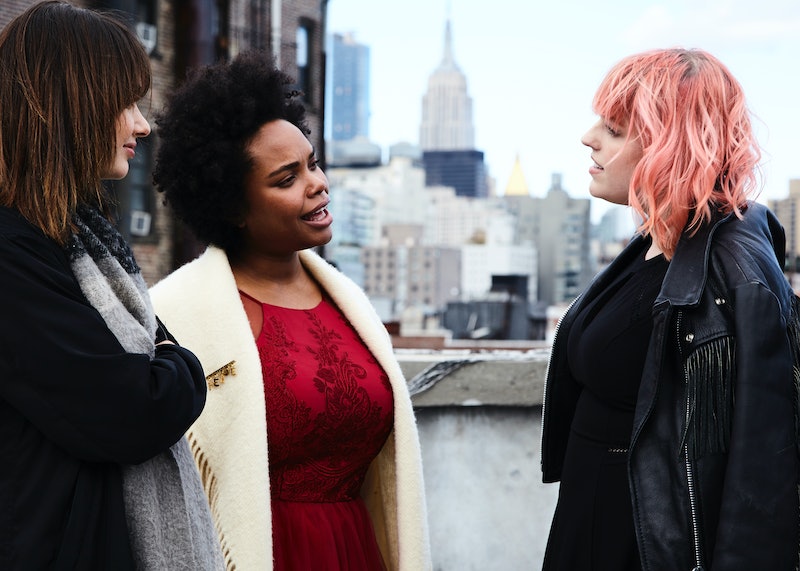 For many of the more than half of American voters who cast their ballot for someone who wasn't Donald Trump, his election to the presidency in November has come as a wake-up call. In the first month of the Trump administration, we've seen unprecedented numbers of demonstrators in the Women's March, local organizing groups leading to raucous town halls pressuring lawmakers, spontaneous protests at airports in reaction to an executive order travel ban, and boycotts of businesses that support Trump. But the biggest long-term impact of the resistance could still be under the radar. In response to Trump, thousands and thousands of people — many of them young, many of them women — are getting involved and running for office for the first time.

"Protests, marches, they're not gonna help us take back our country in the way that electoral power will," Andrea Dew Steele, founder of Emerge America, a group that trains women to run for office, tells Bustle. "They're very important aspects of the resistance, but we've got to start winning races. We need to up our numbers. Women are still terribly under-represented in our country."

But that could be changing. According to Steele, Emerge America has seen an 87 percent increase in applications since the election, with women who have never participated heavily in politics before getting involved. People in states where the group hadn't previously had a presence, such as Alabama, have forced the organization to build new chapters.

We're seeing just an increase women who look at the political environment and see: 'I can actually make a tangible difference here. And I can do that by running for office.'

Other groups have had similar upswings. Run For Something, which was established on Trump's Inauguration Day, raises money nationwide to encourage younger candidates to run for office. According to the founder, Amanda Litman, a former Hillary for America staffer, the group has raised more than $70,000 in its first month — and all from small online donations.

"We launched on January 20th, and almost immediately there was this flood of interest," Litman tells Bustle. "We have more than 6,000 people who've signed up and said they want to run for office. We've got more than 1,000 volunteers who want to help. It's incredible. The outpouring of interest and the hunger for this is so... It's inspiring."

EMILY's List, which is focused on women fighting for pro-choice policies, has received over 6,500 applications from women trying to run since November — over six times the amount of the previous 22 months, according to Alexandra De Luca, a spokeswoman.

"We've seen so many young women come to us — who are not traditionally the women who decide that this is a thing that they're going to do, that they're going to run for office. And women of color as well," De Luca tells Bustle. "We're seeing just an increase women who look at the political environment and see: 'I can actually make a tangible difference here. And I can do that by running for office.'"

One of those women is Marceleen Mosher, 37, who works as a communications director for a mental health facility in northwestern Wisconsin. She describes her area as "real red," and has begun to feel like her state representatives "really don't care what constituents have to say at all." After the election, she co-founded a local Indivisible chapter to pressure her elected representatives, and has been disheartened by their response. So she's planning on running herself for Wisconsin State Assembly, trying to unseat Adam Jarchow, her local representative, with the help of Emerge's Wisconsin chapter.

“I don’t know that I would win," Mosher tells Bustle. Still she's hopeful that even getting involved could help repair her state's politics, which she says have become toxic. "I really don't think I would win in my area, so my run would be more of a kamikaze attack. It would be all about having the conversations that we need to be having, rather than politicized ones. I don't know that I'd win, but I'd have fun doing it!"

The groups recruiting candidates are more hopeful, and aren't intending to turn campaigns into kamikaze attacks. The focus for them is on training and support.

Emerge America runs six-month training programs for women running, including workshops on public speaking, fundraising, and securing endorsements. The day after the Women's March, EMILY's List took advantage of the moment to host a training session for 500 of the women who had come to DC to march, continuing on their activism towards a future in public office.

"Far from being dispirited, women are revitalized by the energy we're seeing and the activism," says De Luca. "I was in that room with the 500 women that we trained after the Women's March. And I knew that there was gonna be a future state senator, and a future senator, and maybe even a future president in that room. Because it's really this new wave of women — not only the women that we have in the Senate or the House — it's the women who are coming up, who are entering the pipeline, and who are really inspired to fight back and to take action and become politically active that gives me and all of us here a tremendous amount of heart."