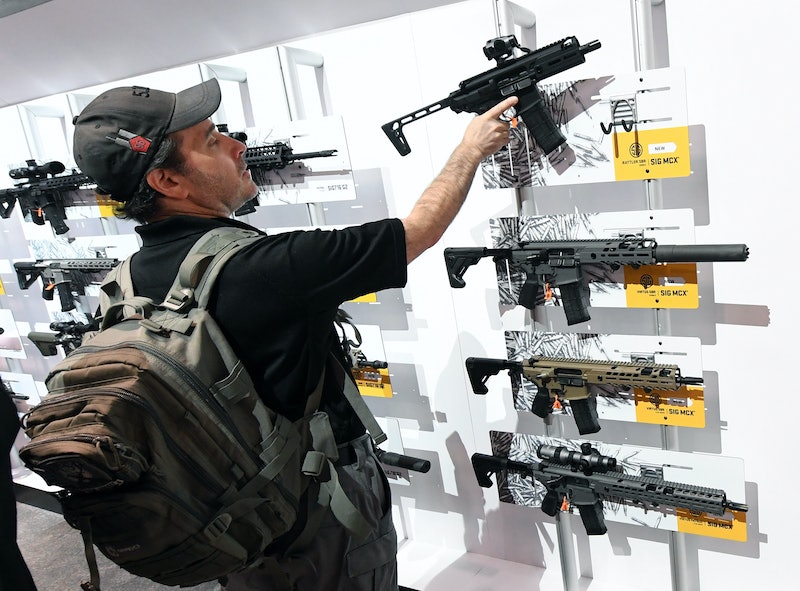 In 2018, the state of gun control in America has reached a boiling point. There have been over 23 school shootings in 2018 alone, according to CNN, with this number accounting for all shootings that occurred on school grounds and injured at least one person. And yet, gun control facts about America reveal how few laws and measures have been passed in recent history to increase the regulation of both the sale and use of guns. This response to mass shootings is just one of the aspects of American gun control that sets the country apart from other developed nations.

Since the horrific Sandy Hook school shooting in December 2012, over 1,600 mass shootings have taken place, according to The New York Times. The outlet defined a mass shooting as a shooting that injured or killed at least four people in a single event or place. Congress couldn't agree on any meaningful gun control legislation until over five years later in 2018.

The New York Times notes that finally on March 23, 2018, President Trump signed a spending bill that, in part, intended to improve record reporting for the background checking system. The spending bill he signed marked one of the only big moments of congressional action related to gun control, safety, or regulation since 2007 when Congress approved a bill that also strengthened background checks and mental health data reporting, according to The Hill. President George W. Bush later signed that NICS Improvement Amendments Act into law, USA Today reports.

This pattern of congressional inaction illustrates how few laws have been changed or amended in recent history, despite the increasing level of mass violence caused by gun-related incidents. Since the 2008 Supreme Court ruling that affirmed the right to own a handgun for self-defense, gun deaths have risen in the United States by 17 percent, according to the Violence Policy Center.

For example, the legal age required to purchase a shotgun (18 years old) as well as the legal age required to purchase a handgun (21 years old) were both established in the Gun Control Act of 1968. This act also established the requirement for a background check by the FBI before purchasing a gun; however, purchases at gun shows can often occur without background checks, depending upon whether or not the owner has a Federal Firearms License.

In contrast to this inaction, other developed countries have continuously passed gun control laws to reflect the needs of their societies.

For example, in the wake of a 1989 Montreal shooting that left 14 people dead, Canada enacted a series of gun control reforms, including a 28 day required waiting period for anyone who wishes to purchase a gun. Canada also requires mandatory safety training courses, and assault weapons are banned entirely, unless they were purchased before 1978.

There is no federal waiting period for anyone who wishes to purchase a gun in the United States. A gun retailer or dealer simply has to wait until the results of the background check are in, or they must wait three business days. Beyond that, only five states require longer waiting periods than three days, with California and the District of Columbia requiring the longest wait time at 10 days.

Australia is another country with more intensive gun control laws. It has become famous for its National Agreement of Firearms, which instituted among other things a temporary buy back program, recalling 650,000 guns in total. But beyond this, a lesser known Australian gun control law is the requirement for gun owners to prove a "genuine need" for the weapon they wish to purchase.

For example, you have to prove that you're a hunter, or a member of a target club. You can't simply buy a gun because you want to own one. Australia also requires safety training courses, like Canada.

There is no explanation required for purchasing a gun in the United States. There's also no required safety training course.

Japan has perhaps the most extensive gun control regulations of any developed country; its firearm and sword law entails that the only permitted types of guns are shotguns, air guns, guns with specific industrial purposes, or guns used for competitions. If you do buy a gun, then you must undergo formal instruction, as well as pass a series of mental, physical, and drug tests, and an extensive background check.

As both advancements in technology and culture change a society's relationship with weaponry, it's only natural that a nation would continue to amend and create regulations to match these changes. Luckily, there are dozens of examples of modern gun control legislation in other developed countries that the United States could look to emulate in the future.

If you're interested in finding out how your congressional representatives have voted on gun control measures in the past, you can check out this interactive chart by NPR.