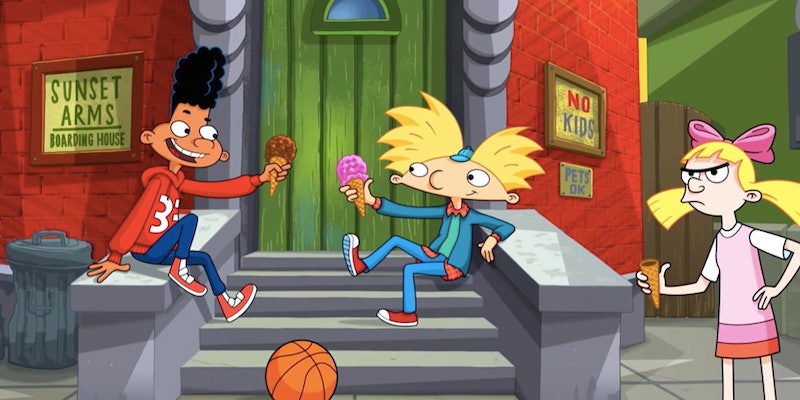 Fans of the cartoon have been waiting patiently for Hey Arnold: The Jungle Movie to be released in 2017, but, in the meantime, new details about the plot of the film have come to light that will tug at your heart strings. The film, which will follow Arnold on his quest to find out what happened to his parents when they left him for one last mission in San Lorenzo, will pick up where your favorite characters left off — sort of. "For our characters, it's going to play like it's only been one or two years," said creator Craig Bartlett in a short video about the Jungle Movie plot details. "So, Arnold is a year older here. He's finishing up the fifth grade; he's going to go into the sixth grade."

But, even better, the new video gives us updated outfits and hairstyles for Arnold, Helga, Gerald, and Phoebe, aka the main four children in a cast that practically goes up to the 100s. Bartlett says that Arnold's entire sixth grade class will be headed with him to San Lorenzo and that we'll get a look at the island that Arnold dreamed about all the way back in the episode "Parents Day." Most important of all, however, is the fact that the video has plenty of little hidden things that could help fans piece together even more of the plot and the personalities our favorite characters have grown into.

It looks like Arnold has gained some added cool points since we last saw him, since this "back to school" look comes with a side of swag if the sample drawings around him are any indication. Why it's so cold in the city that he needs to wear a jacket over his sweater over his shirt has yet to be revealed, but I get the feeling that he might lose that jacket somewhere in the jungle.

And then there's Gerald, upgrading both his hairstyle and his t-shirt. The hoodie looks cozy and matches his sick kicks, but, again, why it's so cold that he needs to trade his tee out for a hoodie when he's going to Central America might be one of those questions we shouldn't ask.

Our pre-teen heroine doesn't look too drastically different from how she was dressed before, but the fact that her bow matches her dress and her sneakers matches the very specific red strip on her dress is amusing. She's pining over Arnold as much as ever if her background doodles are any indication — and she might be plotting something big.

Phoebe has upgraded to what Bartlett calls a "cooler" look for her, along with a longer ponytail, and he's not wrong. But a quick peek at the extra doodles of her show that she might be the voice of reason on this trip, as she looks frequently worried in them.

Grandpa Phil has joined the added coat parade, which suggests some frostier weather than we're used to in San Lorenzo. Or that everyone looks older with a jacket on. One or the other.

Will Stinky's complete disregard for the plane passenger behind him come back to bite him in the country butt? We'll have to wait and see.

Fans will remember this as the "Parents Day" island from Arnold's dream, and so naturally it's where the majority of the action of the film will take place. San Lorenzo is beautiful, dangerous, and, hopefully, the place where Arnold will get some answers.

The map from the back of his parents' journal is clearly what will lead the football-headed hero to the ghosts of his past. Which hopefully aren't literal ghosts.

Now here's where things get interesting. Arnold is holding a "glowing thing," as the creator teased, that has some significance to the plot. Now, Bartlett might have been coy, but here are two things we know about San Lorenzo: that Arnold was born in an abandoned temple on the island and, more importantly, that the jungles of the island are populated by a mysterious tribe of Green-Eyed People. (It was one of their temples that Arnold was born in.) Their relics include emeralds, and thus it could be one such artifact that Arnold is holding as Helga and Gerald follow dutifully in this wake.

The Hey Arnold anticipation has reached a fever pitch that can't be satisfied by combing over every video and glimpse for clues as to the plot. The only thing we can be sure of for now is that fans will finally get closure on many unresolved questions the series left behind.