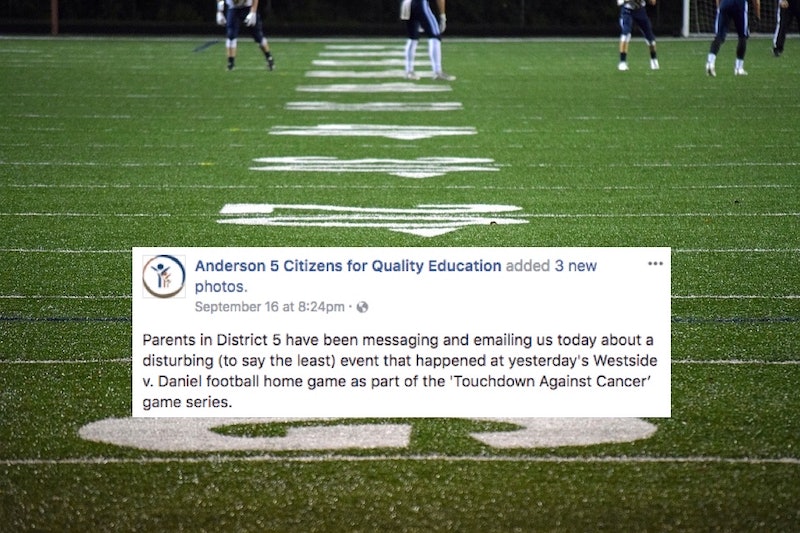 As an apparent "joke" during Breast Cancer Awareness night, four high school students spelled out the word “rape” at a football game last weekend in South Carolina. Each of the four boys had a letter spray painted on their chest as part of a larger group intended to spell out “BUMP CANCER” for Westside High School’s Friday event. An image of the four students spelling out “rape” began circulating online after it was shared on Snapchat. (Bustle has reached out to Westside High School for comment, and will update upon response.)

According to a statement given to HuffPost by Kyle Newton, the school district’s director of external affairs, students with painted-on letters began rearranging themselves before the game, spelling out different words and taking pictures. “One of those [words] was RAPE,” Newton said, continuing, “The principal was informed later that night about what had happened, and worked to identify the students.”

The image was shared on Snapchat with the caption “What we do to Daniel.” (D.W. Daniel is the football team Westside High School was playing the night of the breast cancer awareness event.) A non-partisan group of parents, students, and citizens from the school’s district shared an altered screenshot of the Snapchat photo on Facebook accompanied by a post condemning the students’ behavior.

The group entitled Anderson 5 Citizens for Quality Education shared that they received numerous messages regarding the “disturbing (to say the least)” incident. According to their post, the original image had also been shared on Facebook by multiple students who captured the photo from Snapchat. “Most of the students posting captured images to FB seem to be appalled, which is encouraging,” the group’s post says. As the Facebook post states, members of the group don’t believe these actions should be tolerated by parents, students, or the school district:

“Needless to say, using the threat of rape, even as analogy, is not behavior that any school or any parent should (or hopefully would) condone. Rape culture in high school and college is a real threat to many students. The juxtaposition of a violent message with the breast cancer awareness symbology is of particular concern. The assumption these young men seem to have made is that their position and privilege allows them to make ‘jokes’ about rape as a viable threat.”

The group’s post expressed disappointment that disciplinary actions weren’t immediately taken when the initial incident occurred. “We are puzzled, however, that no action seems to have been taken at the game, when these young men were standing proudly in front of attendees, the teams, and the coaching staff.” The group believes reprimanding this behavior is necessary for the growth of their students and the community as a whole.

“We want these and all of our students to learn how to be empathetic and honorable men and women,” the post ends. “We want our community to grow, not participate in the narrowing of cultural discourse.”

Newton’s statement to HuffPost echoes the above Facebook group’s post, condemning the action of the four students and the acknowledging the severity of their behavior. “We are very disappointed in their actions,” he said. “At best, what they did was extremely offensive ― at worst it could be traumatic to those who have suffered sexual assault. There is no place in any school or in any community for those types of actions.”

Taking these four boys’ actions seriously is necessary to stopping it in the future. To say that calling out rape jokes is an overreaction would be to undermine the power they have on our culture. As previous studies have proven, sexist jokes normalize sexist behavior. As the lead researcher for one of those studies stated, “A concrete source of social influence can shape the expression of a prejudice that is generally considered unacceptable in an egalitarian society.” Basically, these kinds of jokes, in any context but especially those with any social influence (e.g. on a peer’s Snapchat), are not harmless. In fact, they validate and perpetuate misogynistic mentalities.

Also, there were so many better, less offensive things these four students could have spelled out with their spray painted letters. Like “burp” or “crap” or “pecan crumb.” Imagine seeing “pecan crumb” on the chests of an opposing team’s fans. You wouldn’t know what to do. Regardless, in the future, hopefully these students will choose their words a bit little more wisely.