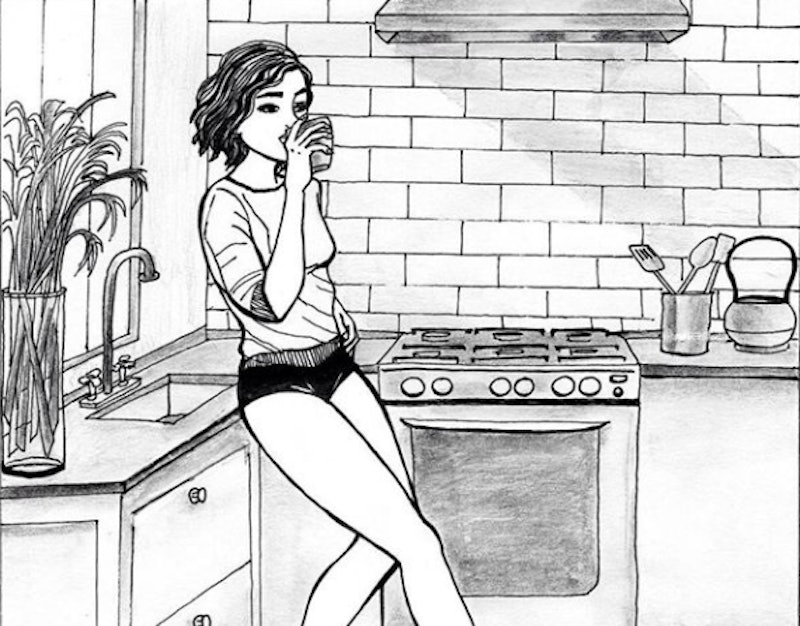 Single ladies didn't become popular until Beyonce sang about them; and even then, the stereotype is still more popularly perpetuated by images like the crazy cat lady. One Mexico-based artist is trying to change that, with her project entitled, "Postmodern Loneliness." In the series of creations (published in a book called "Alone"), the artists depicts why the single life is so good. Her name is Idalia Candelas, and I can say this with certainty: she gets single women.

Don't let the name of the drawings or the book they appear in fool you: this is no depressing reflection of the single life. Instead of creating art around single women who are sad, lonely, lost, and insufficient — which is how our culture (and particularly the media) tend to look at them — the women in her art are happy to be alone. Yes, that exists! In fact, "Postmodern Loneliness" celebrates the single life. Candelas got the idea from the time she herself spent living alone in Mexico City. Candelas tells Mic, "I like to show women who exist in solitude but do not suffer. They are not depressed or crying. Rather [they] are safe, exalting in the sense of enjoying the company of just herself."

Made of pencil, ink, and watercolor, the images of "Postmodern Loneliness" serve as a crucial reminder that being single and feeling unfulfilled are not synonymous. Believe it or not, women can choose to be single, just because they prefer it.

While this writer is happily engaged, I'm also an introvert; and the art of "Postmodern Loneliness" looks like heaven on earth to me. In one drawing, a girl reads on the couch in her underwear. In another, she's taking up the entire bed, because you can do that when you're single and don't have to share it with someone else. In yet another, she appears to be doing the dishes topless, because why TF not?

Don't be fooled by those who say single women aren't as happy as women in relationships, or people who say that single women aren't as healthy, or the countless (and I do mean countless) movies insisting that being coupled is the end goal, and all of life is about finding "the one." Are there women out there who are single and would prefer not to be? Of course; but not everyone feels doomed just because they can't put they're in a relationship on Facebook. Believe it or not, there's more to life than that — like doing the dishes topless and having the whole bed to yourself.