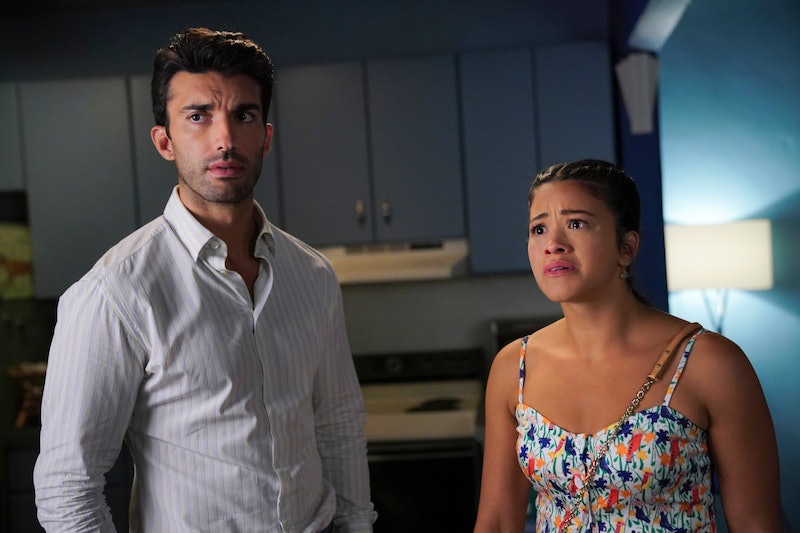 Now would be a good time to grab your tissues because Jane the Virgin just completed their final table read and the cast photos are sure to make you sob. As fans may already know, Jane the Virgin kicked off its fifth and final season on March 27, and watching the beginning of the final batch of episodes is already too much to bear. Following a read through of show's final episode, the cast of JTV got extremely emotional, with many of them taking to social media to express their feelings about the series' last ever table read.

On Wednesday, April 3, actor Justin Baldoni shared an emotional selfie on Instagram featuring himself, star Gina Rodriguez, and Yael Grobglas, all visibly in tears. Along with the photo, Baldoni shared a heartfelt caption, starting, “Five years of cast table reads every week … this was the last one.”

“Ends are always hard. We’ve grown up together. Been through massive life moments together. Through joy and pain. These are real friendships. Not ‘show friendships,'” he continued. “It’s the end of an era but the beginning of so many incredible things." Baldoni, who plays Rafael Solano on the series, went on to say that the show “has given birth to so much beauty in all of our lives” and explained that their tears "are tears of gratitude.”

"I’m going to miss this family. I’m ready for what’s next … but not quite yet. We have three more weeks together," he added, before vowing to appreciate each and every moment that he has left on the set of the series which is coming to an end after five seasons. "I will savor them. I will enjoy them," he shared. "I will appreciate them as I appreciate all of you. For watching us every week and letting us into your homes and your hearts. For binging and sharing and following our journeys. Without you this doesn’t exist. Thank you. For everything."

Likewise, Grobglas, who plays the role of Petra Solano, also shared a emotional photo of herself after the final table read. Her caption explained, "Just had our last table read for #janethevirgin. After crying non stop for 1.5 hours I'm gonna go pass out. Too many feelings."

Andrea Navedo, who plays Jane's mother's Xiomara, revealed that she wasn't able to be present for the table read. However, she did Skype in for the final moments. She posted a video clip of the reading's culmination on Instagram, which featured members of the cast and crew hugging and clapping. Navedo then turned the camera to herself, full of emotion, and explained, "We just finished reading the last episode. It's really good and really touching." As she fought to hold back the tears, she continued, "you guys gotta watch it, it's amazing."

In the caption, she shared,

"Words can’t express what this show has meant to me and the huge blessings it has brought me. At a loss for words right now. Just all I can say is #Wow and thank you to all of the #fans for your support!"

With tears already overflowing, it's safe to say that this final season is going to be a rollercoaster of emotions that aren't going to want to miss.

More like this
The 'Bachelor In Paradise' Schedule Shifts To 4 Hours Every Week After The Season 8 Premiere
By Brad Witter
Nicola Coughlan Shared A Lady Whistledown Excerpt From ‘Bridgerton’ Season 3
By Grace Wehniainen, Alyssa Lapid and Sam Ramsden
The 'Andor' Timeline, Explained
By Gretchen Smail
Alicent's Green Dress In 'House Of The Dragon' May Be An Act Of War
By Kadin Burnett
Get Even More From Bustle — Sign Up For The Newsletter