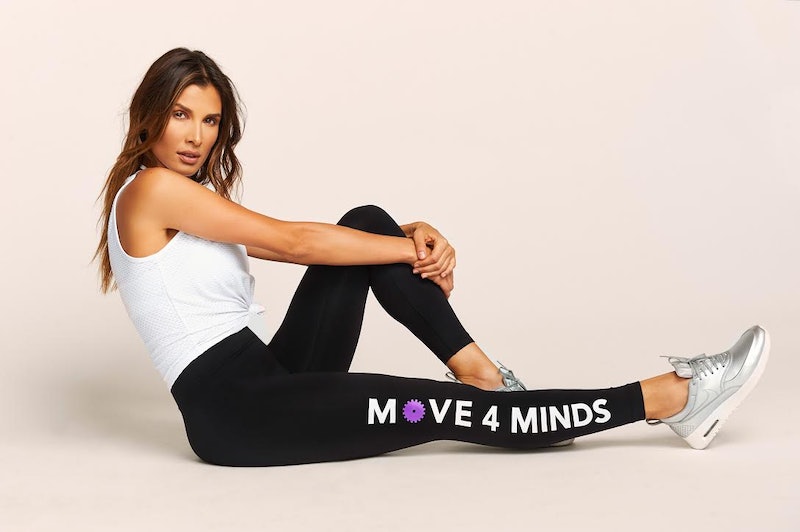 Koral is known for their ultra-chic premium activewear, but with their latest offering, it's about more than the fit, style, quality, and performance they've already nailed — it's about giving back. In a triple-threat partnership, Koral x Maria Shriver x Equinox is supporting The Women's Alzheimer's Movement with a pair of special edition leggings in honor of the organization's Move For Minds initiative.

"There are 5.4 million Americans living with Alzheimer's, and two-thirds of them are women — one of them was my deceased grandmother Rebecca Harari. She's the main reason why I decided to partner with Maria (Shriver) and Equinox Sports Club," says Koral co-founder and creative director Ilana Kugel.

Move For Minds is taking over eight Equinox locations across the United States on Sunday, June 4 to raise money and awareness for Alzheimer's. The event will take place in Boston, Dallas, L.A., Miami, New York, Orange County, San Francisco, and Washington D.C. (Some are full, some have waitlists, and others are still available to register.) The day will include a brain-body workout, brain-healthy snacks, and a panel discussion with experts in brain research, fitness, nutrition, and more.

In addition to funds raised at the actual events, 100 percent of the proceeds from the leggings will go to The Women's Alzheimer's Movement. Here's a look at them as seen on the lovely Maria Shriver, who's also a major advocate for Alzheimer's awareness and research.

They're available to buy now at Koral.com and at select Equinox locations for $88.

The ankle-length leggings are made with the brand's signature moisture-wicking Evanesce fabric. And while you've got your online shopping mojo going, you may want to check out some of Koral's other gear to match your new Move For Minds leggings.

This subtly cropped mesh muscle tank lets you show off your favorite sports bra and high-waist leggings. (Pro tip: This top is normally $75, but it's on sale for a cool $30 at SIX:02.)

One of the brand's signature styles, this racer-back bra is a workout wardrobe staple.

Top it all off with this cozy sporty-meets-preppy sweatshirt.