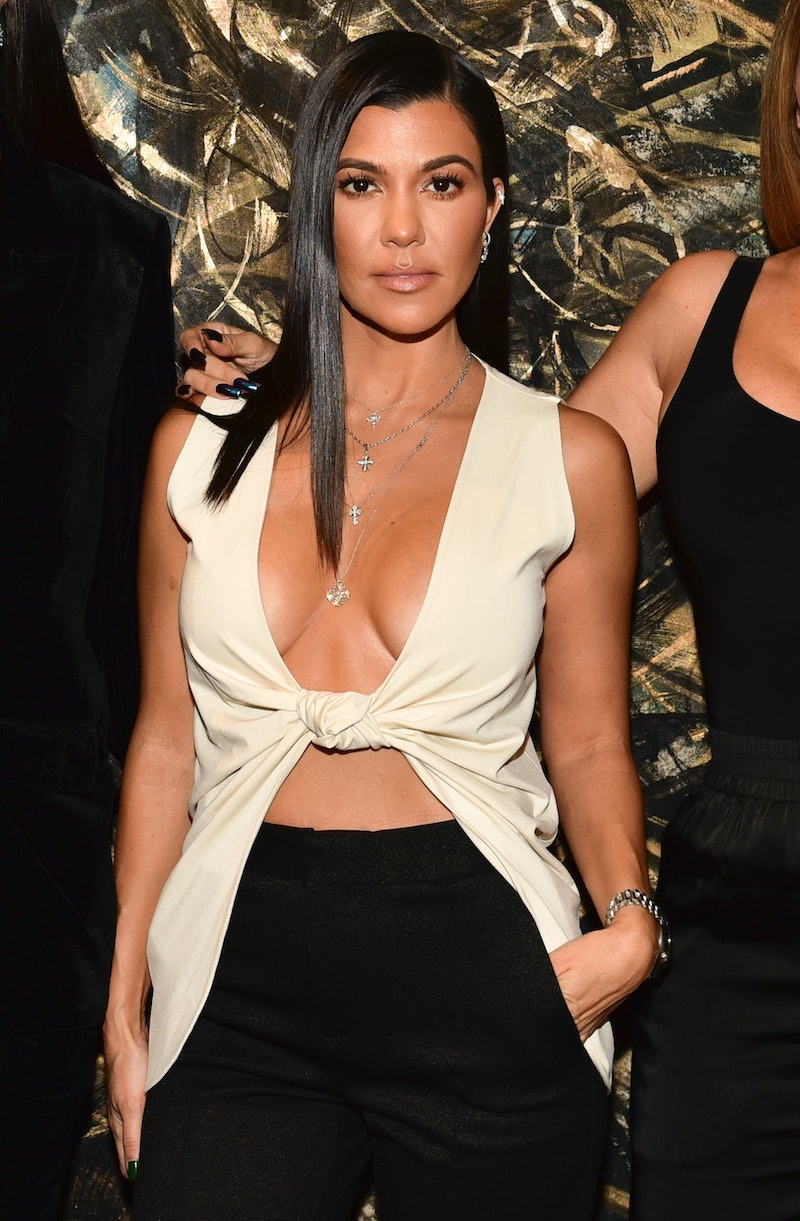 Is Kourtney Kardshian in a new relationship? In all honesty, that's actually pretty unclear. Not that it's actually anyone else's business, but her fans are definitely interested in her love life. Unfortunately for them (and Kardashian herself), there is just so much dating gossip to "Keep Up With." However, Kourtney Kardashian cleared up one relationship rumor in an Instagram Story she posted.

The Keeping Up With the Kardashians cast member shared a clip from the Jan. 28 episode of E! News where host Jason Kennedy remarked, "Last week we go out with Kourtney and some friends. And I jokingly said to my buddy David, ‘Hey, walk Kourtney to her car. We’ll see if the paparazzi or anybody bites.’" And they did bite. Hard. After the two of them were spotted walking to her car, several websites and magazines wondered if account David Dee Duron was dating Kourtney Kardashian.

Along with the E! video clip that Kardashian shared on her Instagram Story, she wrote "And cropped the other 7 people out of the photo of course." Well, yeah. A group of friends leaving a restaurant just isn't as much of a buzzworthy story, unfortunately for her.

Now the fans know that it was just a prank. Nevertheless, before that revelation, the rumor mill was working overtime. Multiple news outlets were convinced that the two of them were a couple and they tried to dig up more information on the suspected romance.

If that Duron's name sounds familiar, Us Weekly confirms that his brother is The Voice Season 3 finalist Dez Duron. However, he is not actually involved in the entertainment industry himself. Instead, Duron is actually a certified public accountant.

Just like anything Kardashian does, just going out to dinner with friends is bound to catch people's attention. This is especially true if most of her dinner companions get cropped out of the photos. Plus, Kardashian isn't even following this guy on Instagram. How close could they be?

Nevertheless, the mother of three is somewhat recently single, hence the curiosity about these photos. As her fans are well-aware, the news broke that Kardashian split with her most recent boyfriend Younes Bendjima in August 2018 after dating for around two years. Before that, she was with Scott Disick, the father of her three children, for over a decade. The relationship with Bendjima was her most serious romance after the split with Disick.

Considering that Kardashian is famous for being a reality TV star, it would make sense for her fans to expect Kardashian herself to be the one to share the news if and when she gets into another serious relationship. Sure, she's not the most out there when it comes to PDA and discussing her relationships, at first.

Nevertheless, if she does get into something serious with another man, she will probably share that story herself or even for a Keeping Up With the Kardashians storyline. For now, she's just living her best life. And, apparently, this includes pranking the paparazzi and some fans by setting up some photo opps.

More like this
Khloé Kardashian Is Reportedly Dating A Private Equity Investor She Met Through Kim
By Jordyn Tilchen and Jake Viswanath
The 'Love Island' Wedding Mystery That No One Saw Coming
By Darshita Goyal
Gigi Hadid’s Dad Shared What He Knows About Those Leonardo DiCaprio Rumors
By Brad Witter
Who Is Nick Cannon Dating & How Many Kids Does He Have?
By Jordyn Tilchen and Radhika Menon
Get Even More From Bustle — Sign Up For The Newsletter