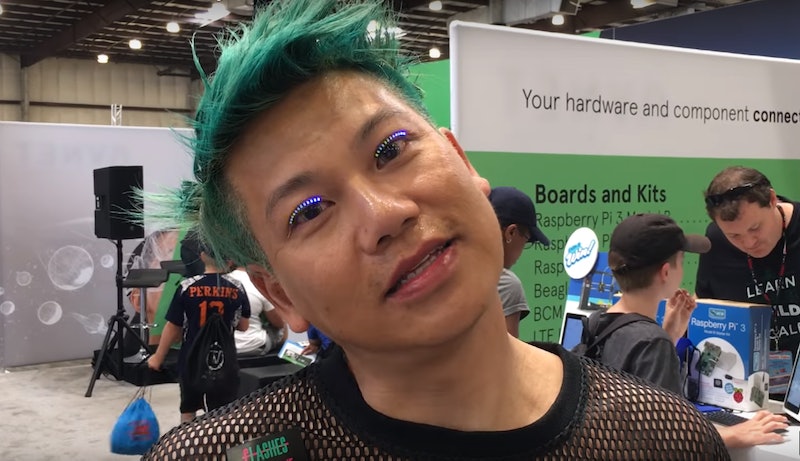 Let's be honest: Living in the present is not all that fun right now. We can't even enjoy terrible memes on Twitter anymore without encountering existential dread every time certain world leaders tweet. Thankfully, the future is closer than ever, because designer Tien Pham's fantastic color-changing LED lashes are the glamorous eyelashes of tomorrow.

Pham unveiled the lashes, called F.lashes, at the annual Maker Faire in San Francisco, and almost immediately had to put up an FAQ on the product's Facebook page to answer the resulting flood of questions.

For example, questions like, "How do they work?" It's simple, said Pham. The eyelashes are applied with normal eyelash glue, and are powered by a tiny watch battery, which lasts up to four hours and is attached to the back of your head with hair clips. Uber-thin wires connect the battery to the lashes, and voila! You officially belong in The Fifth Element.

For folks concerned about having to sacrifice actually seeing out of their eyes for looking glam, Pham said not to worry. "I often can't tell I have them turned on," he said in the FAQ. But that doesn't mean they aren't incredible-looking; Pham has posted snaps of himself wearing F.lashes in the dark, and they are basically a beacon of awesome.

Unfortunately, these rad AF accessories are not yet available, but Pham plans to launch a Kickstarter to bring them to life in mid-July 2017. Available lash colors will include pink, red, blue, light blue, white, yellow, and green, and Pham said more may be added if he can find proper LEDs.

The lashes come with various modes, which can be changed on the fly. Check out Pham's brief demonstration below:

While you unfortunately won't be able to have a pair of F.lashes in hand to show off at this year's summer events — Pham said he's still "fine-tuning" the product and hopes to go into production with the help of the Kickstarter — these lashes are sure to be the perfect accessory for all the summers of the future.