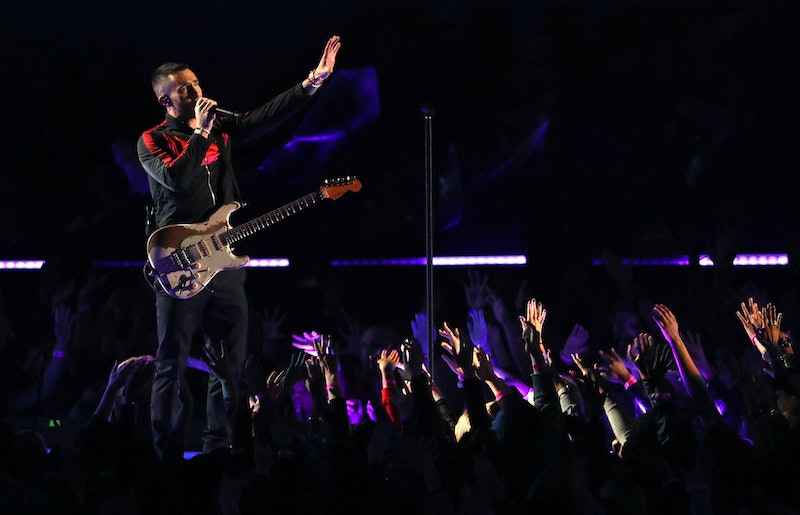 On Sunday, Feb. 3, the Los Angeles Rams and New England Patriots went head-to-head in Super Bowl LIII in the Mercedes-Benz Stadium in Atlanta. The low-scoring game was a bit of a snooze, and the halftime show featuring Maroon 5, Big Boi, and Travis Scott followed suit by featuring relatively uninspired renditions of each of their hits. But while it was a lackluster show, there was one bright spot of the evening — these Maroon 5 Super Bowl halftime memes proved the best part of a tepid evening.

Maroon 5's decision to perform at the halftime show was marred by controversy from the start. The band took heat for accepting the NFL's halftime offer, after celebrities like Cardi B and Rihanna reportedly refused to perform out of support for former San Francisco 49ers quarterback Colin Kaepernick. Kaepernick first knelt during the national anthem on Sept. 1, 2016 to protest police brutality, and has been a free agent since March 2017 — per The New York Times.

As a result, Scott and the NFL announced that they were donating $500,000 to the non-profit Dream Corps and will work with the league on "other initiatives," per Variety. Furthermore, Maroon 5 announced in a statement that they, alongside the NFL and their label, Interscope Records, would be donating $500,000 to Big Brothers Big Sisters of America, per Entertainment Tonight. However, their decision to perform is still an unpopular one, and as a result, fans didn't hold back about what they thought of their performance.

The band took the stage and sang classic Maroon 5 songs like "Harder to Breathe," "This Love," "Girls Like You," and "She Will Be Loved." For a second, it seemed like they'd be playing "Sweet Victory" — the Spongebob tribute fans were hoping for. Unfortunately, that didn't happen, as Travis Scott took the stage right after a Spongebob clip came up onscreen. Fans were nonplussed.

Despite this oversight, others tried to turn a negative into a positive, by pointing out the upside of a unanimously mediocre performance.

Others were here just to make fun of Maroon 5 frontman Adam Levine's dance moves, which were far from being anything like Jagger's.

Not everyone was pleased when Adam Levine took off his shirt while singing. And no, it wasn't just his questionable taste in tattoos that offended some. It was more about the nipple double-standard...

(Yes, that's a reference to Justin Timberlake and Janet Jackson's infamous 2004 performance, in which Jackson experienced a wardrobe malfunction that briefly exposed her nipple to millions of viewers, sparking a crackdown over "indecency" in public broadcasting.)

But while many fans were disappointed with the halftime show, there was one very famous one who seemed to be enjoying herself: Travis Scott's child with Kylie Jenner, Stormi Webster, who watched her dad perform while swaying along to the music:

Perhaps her parents have rightfully decided not to expose her to the music of Maroon 5. Sometimes, ignorance *is* bliss.