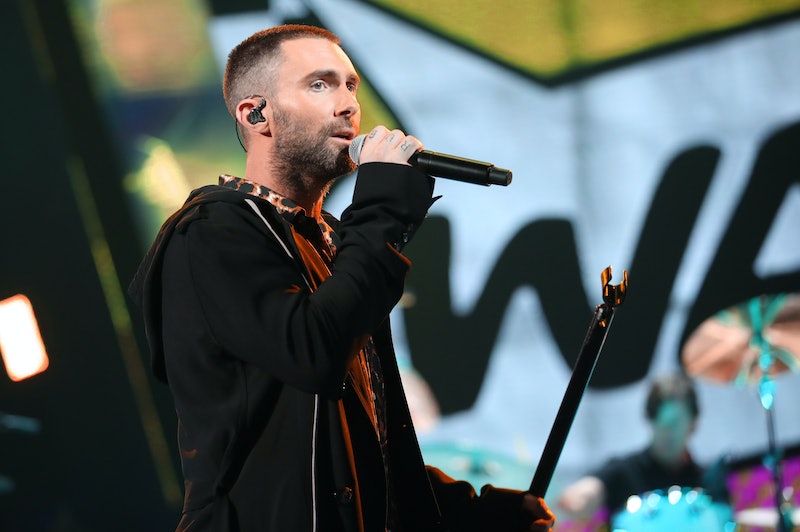 Following Colin Kaepernick's protest of the NFL, which began back in 2016, there have been some artists who reportedly declined to participate in this year's Super Bowl halftime show as a way of showing solidarity with Kaepernick's mission to speak out against police brutality and other social injustice. Those who did decide to participate in this year's event, including Maroon 5, have faced backlash from fans and celebrities alike. Now, Adam Levine commented on Maroon 5's Super Bowl performance, but didn't directly address the cause of the backlash.

While his answers left more to be desired, he did shed some light on his thought process. Levine told Entertainment Tonight that he relied on his own feelings to make the decision to participate, explaining:

"No one thought about it more than I did. No one put more thought and love into this than I did ... I spoke to many people, most importantly though, I silenced all the noise and listened to myself, and made my decision about how I felt ... I will never sit here and deny that. I think that to have not done that would have been deeply irresponsible."

Still, the name of Kaepernick — who's been a free agent since March 2017 and filed a lawsuit against the NFL last year — doesn't come up in any of Levine's Super Bowl comments.

The singer also suggested that there's been controversy surrounding halftime shows in the past, but didn't give any specific examples. "You know, I think when you look back on every Super Bowl halftime show, it is this insatiable urge to hate a little bit," Levine told ET. "I am not in the right profession if I can't handle a bit of controversy. It is what it is. We would like to move on from it and speak through the music."

It's nice that Levine took the time for self-reflection, but his comments don't fully address the issue at hand. The singer says that he listened to himself, but with a controversy that's centered on racial injustice, it might have been better to put the focus on the perspectives of people of color, rather than his inner voice.

Still, that's not to say that Maroon 5 shouldn't have accepted the halftime show offer, or that they won't do a good job. Levine hinted that underrepresented voices will be showcased during the performance, though he didn't give specifics. "They will be [heard] — that's all I want to say because I don't want to spoil anything," the frontman said. "We are going to do what we keep on doing, hopefully without becoming politicians and continuing to use the one voice we know how to use properly."

Levine's comments come after a Super Bowl press conference with Maroon 5 was canceled earlier this week. A number of people tweeted their suspicions that this cancellation was, at least in part, so that the band wouldn't have to answer questions about Kaepernick or the backlash. (Bustle reached out to the NFL for comment on the speculation, but did not receive an immediate response.) On Wednesday, Variety reported that Levine's only interview before the Super Bowl would be the aforementioned one with Entertainment Tonight.

Overall, it sounds like Maroon 5 and their fellow performers, Travis Scott and Big Boi, have put thought into their Super Bowl participation. According to Variety, Scott and the NFL are donating $500,000 to a charity called Dream Corps, which was founded by Van Jones to "support economic, environmental and criminal justice innovators," according to its mission statement. Meanwhile, Maroon 5 is donating another $500,000 to Big Brothers Big Sisters of America. (Super Bowl halftime performers aren't paid, according to Variety, so the donations are coming out of their own pockets, not from any compensation for the gig.)

Fans may still be skeptical about the upcoming halftime show after hearing Levine's comments, but it does sound like he stands by the decision and considered the situation pretty thoroughly before signing on.