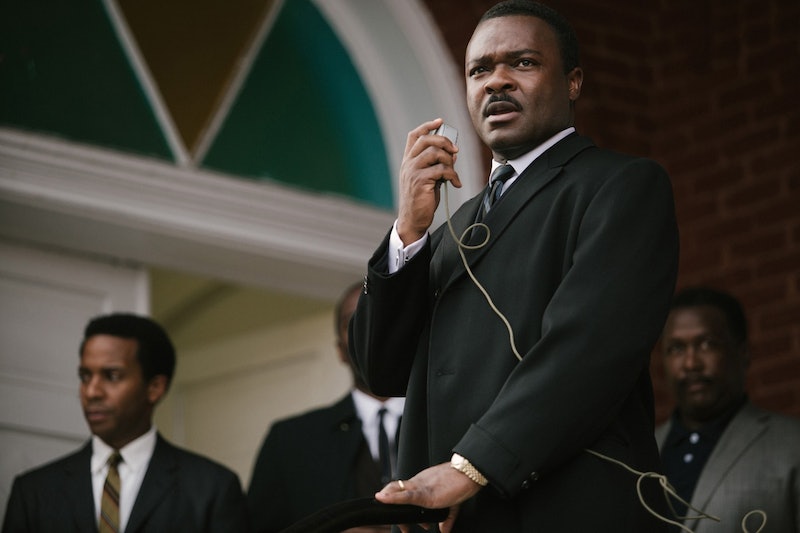 Monday, Jan. 16, is Martin Luther King Jr. Day, a time to celebrate the life and legacy of Dr. King. For many, MLK Day has come to mean a day off of work or school, but the holiday is truly about honoring the icon, who left a major impression on American history. An easy way to take a little time this MLK Day to honor the man's memory is by watching some of the most inspiring Civil Rights Era movies. These films about MLK and the movement honor the great leader in numerous ways, detailing the opposition he faced and the strides he made for black Americans.

In celebration of Dr. King's activism in the civil rights era and the legacy he's left behind, it's only fitting to watch some of the top films honoring his life this MLK Weekend. All six of these films have something profound to say about King's work and life, so use these films to reflect on the icon's messages of peace and equality.

The 2014 film directed by Ava DuVernay focused on the actual marches conducted by King in 1965 in Selma, Alabama. The film garnered deserving critical acclaim for actor David Oyelowo, who played King, and the powerful song "Glory" by John Legend and Common won a 2015 Golden Globe and Oscar.

Mississippi Burning is a film inspired by the grisly murders of three civil rights workers in Mississippi during the summer of 1964. Blacks were brutalized, churched were torched with burning crosses, and people used the “N” word to ignite superiority. The film shows the racial hatred and the realities of the rural Deep South during the Civil Rights Era.

This short film was released in 2008 to commemorated the 40th annual remembrance of MLK. Nominated for an Academy Award, it highlights the events of that fateful day when Dr. King was shot outside of Room 306 at the Lorraine Hotel in Memphis.

A 1999 indie based on Bloody Sunday in Selma, Alabama, the movie is told through the eyes of a 11-year-old Sheyann Webb (Jurnee Smollett) who meets Dr. King (Clifton Powell) and begins to learn theology and activism by his example.

This HBO film stars Jeffrey Wright as Dr. King, and it's based on the book Daybreak of Freedom by Stewart Burns which tells the story of the Montgomery Bus Boycotts.

Lee Daniels’ The Butler is loosely based on the life of Eugene Allen (Forest Whitaker), an African American man who worked for the White House as a waiter and butler from 1952 to 1986. Allen, who in the film is called Cecil Gaines, is shown serving eight presidents, including Dwight D. Eisenhower, who ordered the 101st Airborne Division into Arkansas to ensure the safety of the “Little Rock Nine” entering Central High School. The movie touches on the Civil Rights Act of 1964, the Voting Rights Act of 1965, the Selma-to-Montgomery marches, and the assassination of Dr. King.

Watch these movies this weekend and honor the legacy of an extraordinary man.