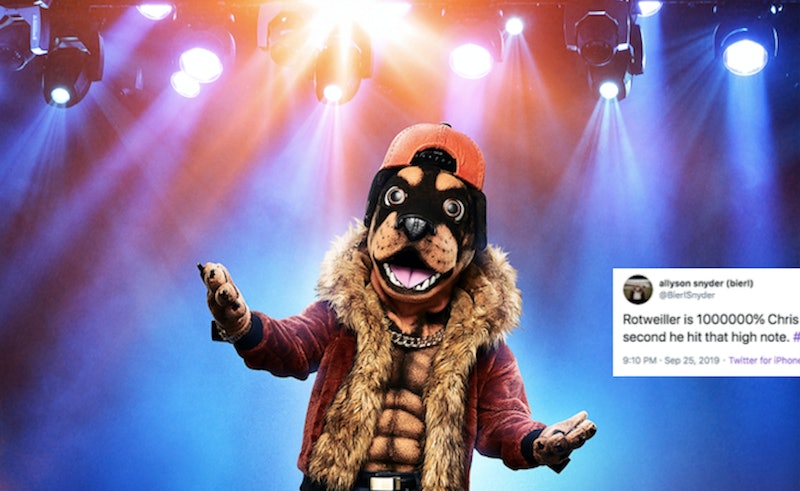 The Masked Singer is officially back in action and so are fans' theories about who could be under the over-the-top masks. One of the frontrunners from the Season 2 premiere was the Rotteweiler. He's truly fantastic and, of course, there are now several Masked Singer Rottweiler theories floating around, including an American Idol favorite at the top of most everyone's list. But, just who is the Rottweiler?

During the his clue package, the Rottweiler teased, "Every top dog knows you gotta look your best in order to perform your best. And the first time I touched the pigskin under the Friday night lights, I learned preparation is key." Of course that football clue could mean he's an athlete or played one in a TV series or movie. Maybe "Friday night lights" is a hint that he starred in the movie or NBC drama of the same name? The Rottweiler also hinted, "Being a hungry competitor is actually how I rose to fame. It happened almost overnight. I chose the Rottweiler because I actually was bitten by one as a kid. Now, this is an opportunity to embody my fear and to show the doubters it's not over. This pretty pup's got chops and I'm ready to take a bite out of this competition."

In addition to the above, there were clues placed throughout the video, including a bouquet of blue roses and a vinyl record playing with the word "live" on it. The Rottweiler was also wearing a football ring that read "fantasy champion."

During a sneak peek episode of The Masked Singer that aired prior to the Season 2 premiere, there were other clues revealed about the Rottweiler. He said, "I'm a total perfectionist and I'm going to work my tail off to earn your puppy love." Rottweiler also said he has a signature hip-hip look, that he's the best in show, and his bark is just as big as his bite. Furthermore, he also added, "Roses are blue, violets are red, but do you have a clue who is behind this doggy head?" He also told the judges during the premiere that he's "loyal," "fierce," and has a "bit of a wait and see attitude."

So who exactly is Rottweiler? The judges threw around a few possibilities, including James Van Der Beek, Russell Wilson, Brian Littrell, J.C. Chasez, and Nick Lachey. Judge Nicole Scherzinger also said she got Fall Out Boy, Incubus, and Bruno Mars vibes from the Rottweiler. But, the following seem to be the most popular theories so far.

It's unclear why people think Shad Moss, aka Bow Wow, is the Rottweiler, but it could be simply because of their names. There's no denying Moss has experience in the music industry and could be trying to make a comeback after all these years. Like the Rottweiler said, "Now, this is an opportunity to embody my fear and to show the doubters it's not over."

Scott Porter is also a top choice. First of all, he played Jason Street in Friday Night Lights. Secondly, as pointed out by @courtneyreh on Twitter, he owns the same pair of shoes the Rottweiler was wearing in the premiere and he starred in Madden's Longshot, which could be another football reference. Finally, he's also a singer. As @Robbi_Lynn and @BittyAB18 tweeted, Porter showcased his singing chops in Hart of Dixie and has even performed live.

And here is the most popular choice — Chris Daugthry from American Idol. He didn't win his season, but the singer made a name for himself following the reality singing competition with is band Daughtry. Now, there are many who are absolutely convinced Daughtry is the Rottweiler. "Rotweiller is 1000000% Chris Daughtry. Easy. I knew it the second he hit that high note," @BierlSnyder tweeted.

The Rottweiler clues could also be interpreted as references to Daughtry's songs, including "It's Not Over," as noted by both @leticiariesgo and @tappershelby. As for the blue roses, well that just might be a clue for the massive tattoo Daughtry has on his arm, as shared by @pokerforkittens. Oh, and Daughtry also played football when he was younger. If that isn't enough, seeing as Daughtry became famous "overnight" thanks to American Idol, he could very well be the Rottweiler.

Masked Singer fans are just going to have to wait for the Rottweiler's unmasking. Here's hoping as the season continues and more clues are given, the Rottweiler will be easier to identify. Based on his first performance, fans might be waiting a long time for the Rottweiler to take off his mask until the very end of the season. Yes, he could very well win the entire show if he keeps rocking it like he did in the premiere.