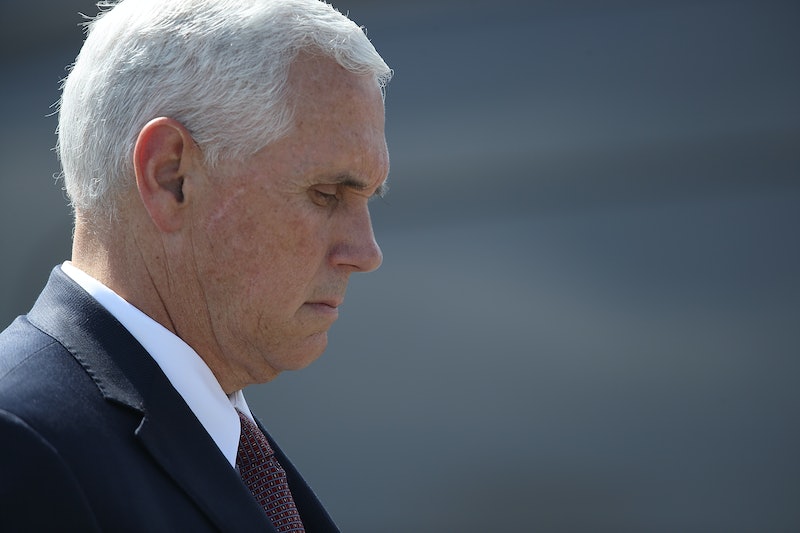 Vice President Mike Pence accidentally gave the Internet the most perfect catch-all phrase while responding to a New York Times report that he was supposedly seeking to run for president in 2020. Denouncing claims he would run if Trump doesn't seek a second term, Pence called the report "disgraceful" in a statement posted on Twitter.

Per his statement, released on Twitter on Sunday, Pence said:

Today’s article in The New York Times is disgraceful and offensive to me, my family and our entire team. The allegations in this article are categorically false and represent just the latest attempt by the media to divide this administration. Whatever fake news may come our way, my entire team will continue to focus all our efforts to advance the president’s agenda and see him re-elected in 2020. Any suggestion otherwise is both laughable and absurd.

In the same vein as Taylor Swift's iconic request to be "excluded from the narrative" last summer, Pence's response that the article was "disgraceful and offensive to me, my family, and our entire team" makes for the perfect pearl-clutching, dramatic response to any slight inconvenience or major political allegation.

Did your horoscope read you to filth? Someone leave you on read? Did you get #caught deep stalking your ex? Just tell them, "This is disgraceful and offensive to me, my family, and our entire team."

More like this
These Incredible Prime Day Deals Are So Good They're Selling Out Fast
By BDG Commerce
Jennifer Coolidge Needs 'Legally Blonde 3' To Happen So She Stops Getting Hot Dog Jokes
By Jake Viswanath
What Is Ben Affleck's Net Worth? At 50, The Oscar Winner Makes 8 Figures Per Film
By Meg Walters
Kim Kardashian Is Releasing A Line Of Earbuds With Beats
By Alexis Morillo
Get Even More From Bustle — Sign Up For The Newsletter