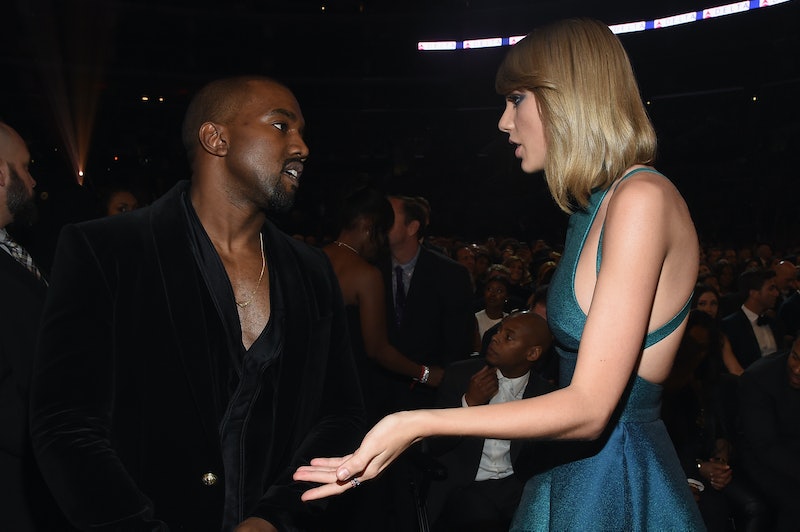 If for some reason you were in outer space last night and missed the social media showdown between Kim Kardashian and Taylor Swift (and the subsequent "excluded from this narrative" meme that was born), here's a quick summary for you: remember when Taylor Swift was upset at mentioned in Kanye's song "Famous"? You know, the one where he says "I feel like me and Taylor might still have sex/ Why?/ I made that bitch famous." Well, when the song was released, Taylor's team said publicly that she didn't approve the song and cautioned him against its "misogynistic message."

Cut to last night: Kim released some secretly filmed footage of Kanye on the phone with Taylor, having a conversation about the song, and allegedly receiving Taylor's approval. Shortly after, Taylor took to social media to defend herself and point out that in the footage Kim played, you never heard her approve the actual finished lyrics, because she had not even heard them yet. She added that she'd "like to be excluded from this narrative" that the internet was literally going insane over.

Over time in public feud history, celebrities have taken to their social platforms to try to squash or perpetuate beef. In Taylor's case, she chose some fancy wording:

Where is the video of Kanye telling me he was going to call me 'that bitch' in his song? It doesn't exist because it never happened. You don't get to control someone's emotional response to being called 'that bitch' in front of the entire world.

Being falsely painted as a liar when I was never given the full story or played any part of the song is character assassination. I would very much like to be excluded from this narrative, one that I have never asked to be a part of, since 2009.

That's PR talk for "I'm not going to to add fuel to this fire and please stop talking about me". Unfortunately, when it comes to big celebrities, "please stop talking about me" falls on deaf ears. The people love to talk about celebrities business, especially the internet. So despite the fact that Taylor very kindly asked to be removed from the narrative, she most definitely will not have her request granted. Her mere request is trending on Twitter, which has already turned into a meme. These are 13 of the best "please excuse me from this narrative" meme tweets inspired by Taylor's response:

Getting Out Of Work

If only we could pull a Taylor on Monday mornings.

A Story That Doesn't Involve Pants

Because we all want to play the character that doesn't have to wear pants.

That literally no one wants to be a part of, ever.

Would Have Been A Great Away Message

Will now work fine as a senior quote.

A Year Of No Thanks

Literally, a year of news stories that everyone wishes weren't real.

You don't want to be part of that early morning grind!

Because it's something we need to talk about with our community ... or not talk about.

Oh, because paying rent is a story line I'm no longer interested in playing.

Because like what kind of operation are you running sir?

Because if you don't know your account balance, it doesn't exist.

Don't Tell Me My Life

When Netflix tries to tell you who you are.

More like this
Twitter Is Freaking Out Over Rihanna’s 2023 Super Bowl Halftime Show Announcement
By Stephanie Topacio Long
Twitter Is Saying The Same Thing About Roger Federer’s Retirement From Tennis
By El Hunt
Everything To Know About Taylor Swift’s 10th Studio Album, 'Midnights'
By Grace Wehniainen and Jake Viswanath
Lizzo Twerks While Playing James Madison's 200-Year-Old Crystal Flute Onstage
By Radhika Menon
Get Even More From Bustle — Sign Up For The Newsletter