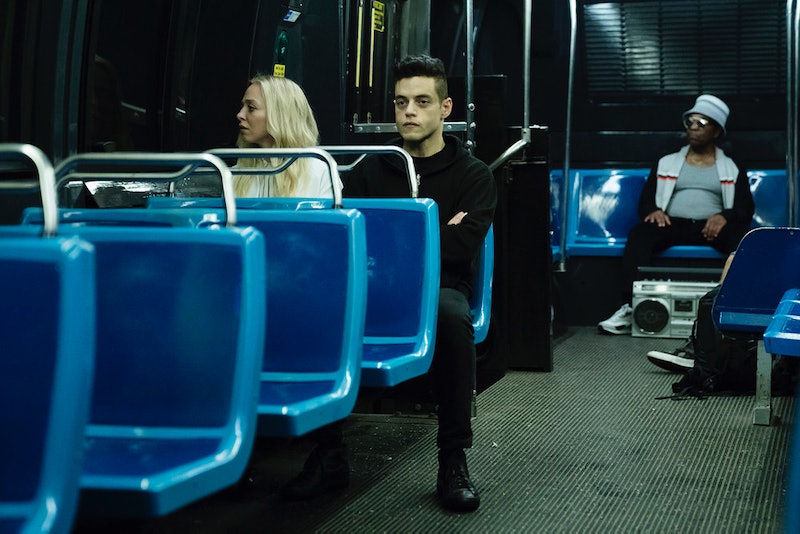 Mr. Robot has proven itself as one of the most surprising series of its generation, throwing twist after twist at its dedicated audience. From the truth behind Mr. Robot to Season 2's infamous prison-switcheroo, the show has become associated with its world-altering twists. If any of these Mr. Robot Season 3 theories are true, then the show could be taking a major turn for the weird.

Even before the third season started, fans were trying to get the drop on the series and figure out what surprises Mr. Robot has in store for them. Mr. Robot has always played fast and loose with reality, showing the audience the world as Elliot sees it. However, Season 3 suggests that it's not just Elliot's perception of reality that can be bent and molded, but reality itself. The latest season opens with Whiterose having a menacing discussion with her lackey in the Washington Township power plant that contributed to the death of Elliot's father. The show then revealed that the plant contained an absolutely gargantuan piece of machinery – but what exactly is it? What is its intended purpose?

Whatever the truth turns out to be — and we may not know until the end of the season — this device is the crux of the wildest theories behind what's going on in Season 3 of Mr. Robot.

Lost did it, Game Of Thrones has done it, and now it looks like Mr. Robot could be joining the ranks of television shows that took a trip to the past. Some fans suspect that Whiterose and the Dark Army are attempting to build a time machine that would allow them to affect reality.

The idea of time travel has always been in the background of the series — from Whiterose claiming that she likes to "hack time" in Season One to Elliot's favorite movie being Back To The Future II. The biggest nod towards time travel, however, came in the premiere of Season 3, when Angela talked to Elliot about the possibility of undoing everything. Not just the Five/Nine hack, but even undoing the death of their parents.

While the show has laid out plenty of hints about time travel, creator Sam Esmail told Entertainment Weekly, "The problem with time travel ... it’s game over. Then all of the rules go out the window. Throwing out time travel in the middle of a series run is a little late." Esmail seems to have denied the theory that Whiterose is building a time machine. Then what is that giant contraption hidden in the Washington Township power plant?

One of the other sci-fi elements that have popped up since the show's early days has been the idea of parallel universes, and the show made that subtext explicit in the opening episode of Season 3. Whiterose and a tour guide at the power plant shared musings on realities different than our own, and the show has long toyed with the idea of reality being uncertain.

There have been several references to The Mandela Effect in the show, a phenomenon in which large groups of people seem to share the same, false memory. "Operation Berenstain" is a reference to people misremembering The Berenstain Bears as The Berenstein Bears. Some fans have suggested that the massive machinery is intended to interact with parallel universes in some way.

Reddit User JohnnyAtlas posits that the giant machine could be a quantum computer, capable of "calculating all probable outcomes of any given action. With enough power, Whiterose could unlock the door to parallel universes." In fact, some users believe that this has already happened, and Elliot is the result of this experiment. Whiterose proclaims that Elliot has a "unique condition," which Reddit User MrJimmyy believes to mean that he's "able to perceive or at least be aware of the existence of his parallel self ... Mr. Robot." This suggest that Mr. Robot leaves his own universe to inhabit Elliot, his parallel self. It's complicated, but what about Mr. Robot is simple?

If not talking to parallel universes, some suggest that this quantum computer could be able to hack reality itself. Reddit user unityX88 wrote, "White Rose has at some point discovered we are living in a simulation ... This is why she doesn't believe in things like coincidence-- there can't be coincidence when the world is literally a program." Basically, if reality is just a simulation, Whiterose seeks to hack into that simulation from the inside. Of all the theories regarding what is really going on in Season 3, this theory may be to most true-to-real-life. According to Scientific American, some philosophers and scientists are starting to believe that that may be the nature of our reality — that everything is a Matrix-style simulation.

This would explain Angela's belief that she and Elliot could somehow "change everything," it would explain the Mandela Effect away as a glitch in the system, and it would make sense that the most powerful people in the world are focusing their efforts on having absolute power. Perhaps the most compelling evidence of this theory comes from an Easter Egg in the Season 3 premiere — and it's quite the rabbit hole.

As Reddit user thebuggalo discovered, a QR code in the background of a scene in the premiere episode leads to a series of connected sites that eventually leads to the r/REALMysterySpot subreddit, which discusses Ecorp and the Washington Township Power Plant as though they are real things – an in-universe subreddit. One post on the r/REALMysterySpot subreddit, the only post every by a user named DenOfMellowMen, reads "Our entire perception of reality is all but a simulation. Everything we see and know and touch and feel is an illusion. All facets of your life is nothing more than a digital construct in some future civilization’s computer simulation." All of the posts on the r/REALMysterSpot subreddit and the related r/inside_e_corp subreddit are from two years ago, which is when Mr. Robot is set. Even if Mr. Robot doesn't end up being a simulation, it seems the writers behind the show are aware of the real-life science behind the possibility of such a thing being true.

Mr. Robot has rarely been a predictable show, and there's no guarantee that the plot will go in any of these three directions. What is clear, however, is that Whiterose is planning something huge, and that Mr. Robot is starting to get into some pretty out-there ideas. Only time — or maybe a quantum computer — will tell if Mr. Robot is really going to go full-science-fiction.