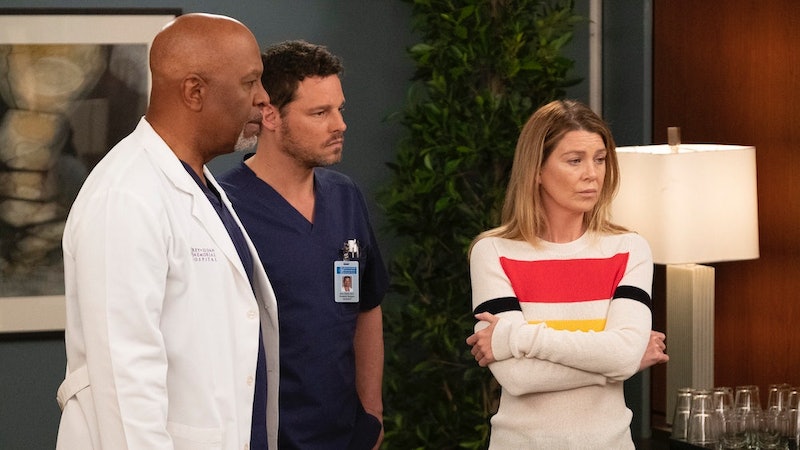 Grey’s Anatomy left off on a series of uncertainties. Following Season 15’s finale back in May, one star just teased what will become of the surgeons at Grey Sloan hospital. In a new interview with Entertainment Tonight, James Pickens Jr. opened up about how Grey’s Anatomy Season 16 will address those major cliffhangers. The medical drama, which returns on September 26, concluded with Meredith (Ellen Pompeo), Richard (Pickens Jr.), and Alex (Justin Chambers) losing their jobs for their roles in committing insurance fraud to aid a child seeking asylum. More so, Andrew (Giacomo Gianniotti) was sent to jail and Meredith could face jail time.

With the series’ core characters fate in jeopardy, fans have been impatiently awaiting Season 16’s return to see where things pick up — which, according to Pickens Jr., will pick up right where Season 15 so dramatically concluded. But what will Grey’s Anatomy even look like sans Meredith, Richard, and Alex at Grey Sloan? "It's going to be interesting," Pickens Jr. told ET about the characters’ fates post-cliffhanger. "It's going to test everybody."

He continued, "The folks who remain at Grey Sloan and our characters who now have to look into new territory and figure out what's the next step of my career and my life. That's going to be what the audience is really going to take a hold of."

In the finale, Richard was fired by none other than Miranda Bailey (Chandra Wilson), his former protege. While the scene may have come as a shock to fans, Pickens Jr. explained that it “made perfect sense” from a creative standpoint. “It made perfect sense,” he told ET. “If someone was going to fire me, [it had to be] Bailey, who I mentored. But it sets up for some really fascinating and really funny and timely storytelling moving forward. I'm excited to see where it takes us all."

When asked if Season 16 would be the season that Richard ultimately retired for good — a decision the surgeon had long been considering early in the series’ run — Pickens Jr. remained mum. “We don't know yet, but he's kind of the glue that kind of holds everything together,” he teased to ET. “This will be interesting for him. It'll test his relationships, it'll test his sobriety to some extent."

While the series’ core characters’ fates are a cause of concern, fans can find solace in the fact that love interests Meredith and Andrew appear to be growing strong despite, you know, everything going on in the new season. On July 30, Pompeo took to Instagram Story to share a glimpse of Season 16 with co-star Gianniotti. Alongside a picture of Gianniotti propped on a bed with ice cream, Pompeo captioned, “This is my first scene of Season 16 eating ice cream in bed with @giacomo_gianniotti and I get paid??? #shondalandproblems”

Elsewhere on Instagram, Gianniotti shared his own picture from the first day back on set. “First day back at work with this beauty! @ellenpompeo,” he captioned a selfie with Pompeo. “Season 16 of @greysabc here we go!”

Grey’s Anatomy returns to ABC on Thursday, Sept. 26 at 8 p.m. ET/PT. Until then, some ice cream in bed sounds like a solid remedy to distract from the uncertainty surrounding the beloved characters' fates.