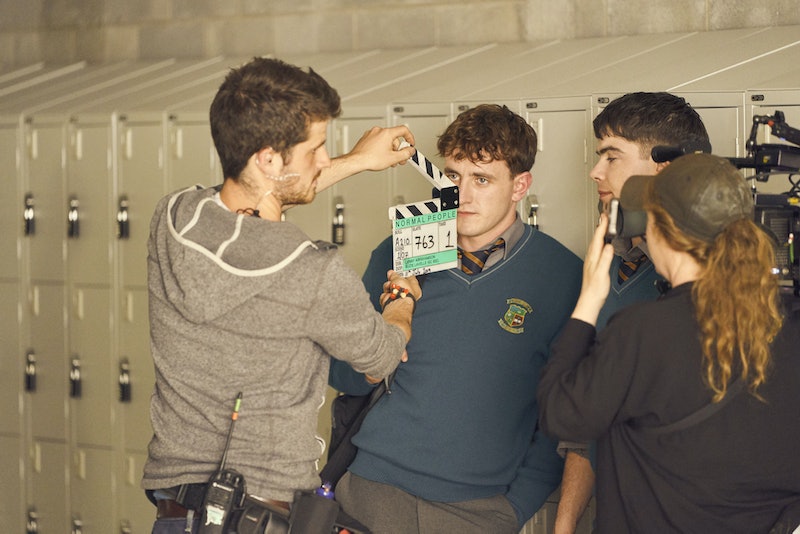 It’s not long before the TV adaptation of Sally Rooney’s much-loved novel Normal People will be airing on the BBC. The hype surrounding the series has been almost unbearable for cult Rooney fans and it isn’t long now before Paul Mescal and Daisy Edgar-Jones will make their debuts as Connell and Marianne. In the run up to the release date, the BBC has released behind-the-scenes pictures from Normal People, along with some more beautiful stills from the series, and it’ll only make you more curious how Connell and Marianne’s complex relationship will play out on screen.

The BBC has announced that the boxset of Normal People will land on BBC Three on April 26. On April 27 there will be two 30 minute episodes shown on BBC One with the program airing every Monday. Speaking about bringing her award winning book to the screen Rooney said, “The biggest challenge of adapting the book was trying to make the inner lives of the characters legible through their outward actions. In some ways Normal People is a novel about the differences between the characters’ outer and inner selves, so we had to find new ways to dramatise those differences on screen. As with all aspects of the adaptation, my co-writer Alice Birch was enormously helpful in tackling that challenge.”

Below are the new pictures released today.

The behind-the-scenes images of Edgar-Jones, Mescal, and the rest of the cast surrounding by crew proves just how much work goes into any big drama like this one.

Oscar-nominated director Lenny Abrahamson can be seen in some of the shots released today. Abrahamson directed the first chunk of the series before handing the baton to Hettie Macdonald.

Daisy Edgar-Jones will play one of the leading roles in Normal People. She’s previously starred in Cold Feet and War Of The Worlds. Speaking about Marianne she said, “I found that Marianne thinks she's quite a cold person and Connell is ultimately an incredibly warm lovable person. She describes him as a big baby tooth which I always love. What she needs and loves about Connell is his homeliness; he has such a warm family, even though it’s just him and his mother, their relationship is so much fuller and warmer than anything Marianne’s had at home.”

Connell is Paul Mescal's first TV role. With a background in theatre, it was his first time working in front of the camera on a TV production and speaking about his experience he said, “it was a long time but it went fast, and while it was a massively intense shoot it was the best summer of my life. You are making something you are fully behind, playing characters that you really love. We had Lenny and Hettie, Element, and BBC so behind us, you couldn’t dream it up.”

Shots of the leading couple

Fans of Normal People will know that the entire storyline is based on Connell and Maranne’s complicated, roller coaster relationship. The images of Edgar-Jones and Mescal together are so intimate and when speaking about casting Rooney said, “I was involved in the casting process from the beginning, but I was conscious that I didn’t want my preconceived ideas about the characters to overwhelm my judgement about who was best for the part. We found Paul quite early in the process and I think there was an immediate consensus that he was going to be our Connell. Then we had to look for a little bit longer to find Daisy. But as soon as they were on screen together, I think we all knew it was the right match.”

As well as revealing a little bit of the filming process and what Edgar-Jones and Mescal will look like on screen, the new images introduce some of the other characters in Normal People. These include Connell's mum Lorraine (played by Sarah Greene) as well as Marianne's brother and mum (played by Frank Blake and Aislín McGuckin, respectively).