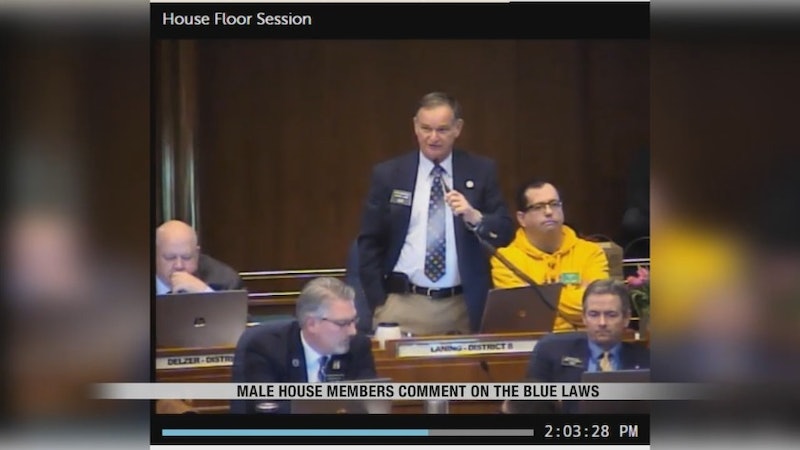 While social norms are constantly evolving and attitudes across the country are becoming more progressive, there are still some places that hold very outdated thinking when it comes to men and women, and what they should be doing. Take North Dakota, where Rep. Bernie Satrom suggested wives should spend Sundays making breakfast for their husbands.

Why was this even brought up in the first place? Well, North Dakota abides by what it calls a "Blue Law," which in its current form means that businesses aren't allowed to operate before noon on Sundays. Previously, businesses were barred from doing any sales on Sundays, but in 1991, it was moved to noon. Now, lawmakers are considering axing it altogether.

However, Satrom thinks the Blue Law should be saved, because, as he told the chamber, on Sundays people should be "spending time with your wife, your husband. Making him breakfast, bringing it to him in bed, and then after that go take your kids for a walk." It was an incredibly sexist comment, so outrageous that it almost seems like a joke. His reasoning implied that women exist solely to serve their husbands. He could have said many things to defend the law, but he chose to say that instead of shopping, a woman could make breakfast for her husband.

Amazingly, he's not the only one who is against lifting the ban because of sexist views of women's responsibilities. According to Valley News Live, Rep. Vernon Laning told the chamber, "I don't know about you, but my wife has no problem spending everything I earn in six and a half days. And I don't think it hurts at all to have a half day off."

So he's not only airing what he considers his wife's spending problems on the North Dakota chamber floor in the middle of a debate over a law, but he's also boiling his wife's role down to one thing: spending his money. Notice that he also makes a point to say that he is the one who makes the money. Laning told the Valley News that he was just joking, but jokes about a woman spending her husband's money aren't actually funny or OK.

It's fine if these two men do not want to go into a business themselves on a Sunday morning, but that doesn't mean that the rest of the people in North Dakota need to be subjected to the same archaic gender roles that they are projecting. Ultimately, the attempt to overturn the law failed, but whether the representatives' wives feel like catering to them on Sunday mornings could be very up in the air.