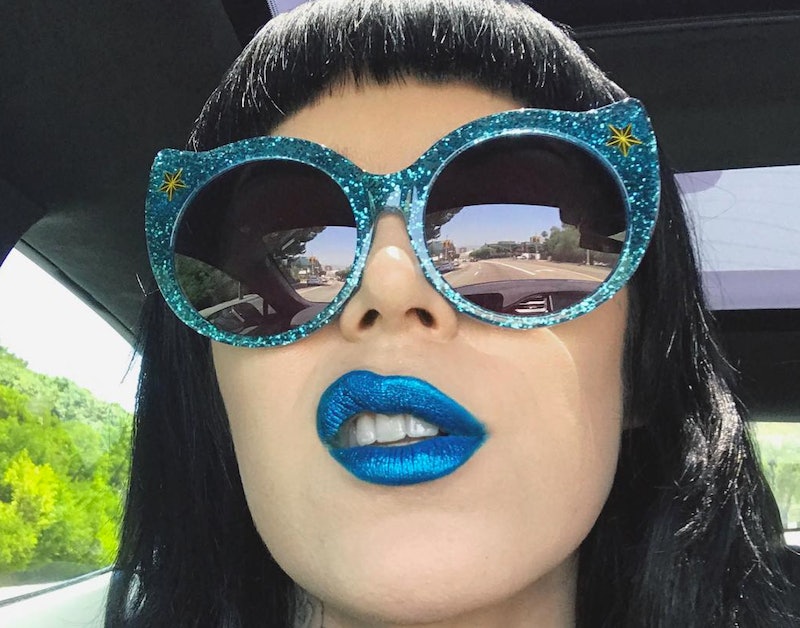 Everlasting Liquid Lipsticks in matte texture and Lock-it Foundation are Kat Von D Beauty's hero products. Those highly functional items with extensive shade options are that which launched a legion of loyalists that I have christened Kat Von D-evotees. Kat Von D Everlasting Liquid Lipsticks are getting a metallic makeover. It's a revamp you never knew you wanted and needed until you see the first teaser posted by the makeup maven and celeb tattoo artist.

The Glimmer Veil Everlasting Lipsticks are coming... we just don't know when.

Von D posted a photo of herself with sparkly, glimmery blue lips which actually matched her sparkly sunglasses. The shade is called "Satellite" and it's one of nine shades in the forthcoming Glimmer Veil collection.

In the caption, Von D described the formula as longwear and "like heaven on your lips." It was created to be worn on its own or layered over any other longwear formula, such as the OG Everlasting Lippies!

The brand is all about the glimmer texture right now, thanks to the Glimmer version of the Shade & Light neutral eye contour shadow palette, which comes with its very own eyeshadow brush.

Don't panic, Kat Von D-evotees. The Glimmer Veil Collection looks to be an extension of, not a replacement for, the usual Everlastings.

Here's a Glimmer Veil IRL and on KVD's lips. It's a bold color but check out that metallic sheen. It's intense and gives you an idea of the depth. While many of us can't get away with such an adventurous shade at work or on a date, the formula looks ace. As KVD notes in her caption, swatches, other shades, and launch details are coming soon. Not. Soon. Enough.

Check the sampling of reactions to this metallic Everlasting.

Von D is all about blue lippies lately. This is Bruno, a metallic blue Everlasting lippie that is part of the upcoming Farm Sanctuary charity range due out Nov. 1. This is one of four.

Grey lips... don't care! The matte Everlastings are quite an expansive range.

Project Chimps is a brick red charity shade that is back for a limited time. It supports KVD's unwavering animal sympathies.

The brand has already gotten glimmer right with the eyeshadow palette. The lippies will follow. Glimmer is like shimmery and glittery, BTW.

Check out the “Beauty Tips” stream in the Bustle App for more stories just like this!