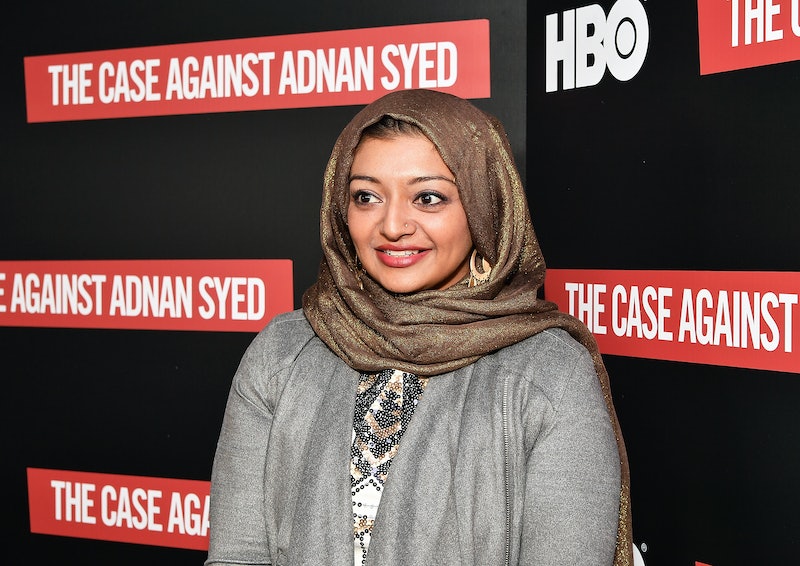 When Rabia Chaudry reached out to This American Life contributor Sarah Koenig about her friend Adnan Syed, she couldn't have predicted the cultural phenomenon that Serial would become. In the five years since the podcast aired, Chaudry has continued to advocate for Syed, who was convicted for the murder of his ex-girlfriend Hae Min Lee in 2000 but has always maintained his innocence in the case. In HBO's new docuseries The Case Against Adnan Syed, Chaudry provides updates about what's been happening with his case, reflects on Serial, and retraces how she first got involved.

While Serial has largely been credited with renewing interest in Syed's case, Chaudry's own podcast, Undisclosed, has played a significant part in keeping that attention going, as has Chaudry's 2016 book Adnan's Story: The Search for Truth and Justice After Serial. The attorney has spent a significant portion of her life advocating for Syed, and told Page Six that she hopes The Case Against Syed will further Syed's potential release from prison.

"We've done the biggest podcast in the world, a New York Times best-selling book, and now … this incredible docuseries. We've given this case everything we can and I wonder if this doesn't work, then what’s left?" Chaudry said. "At the end of the day for his family and friends, it's about bringing him home."

During a recent interview with Newsweek, she also reflected on how projects like Serial and The Case Against has given Syed — and other defendants — a platform they may not have otherwise had.

"What Serial did is show that if you do it right, you can use media and social media to help your case," Chaudry told the outlet. "You don't have to relinquish all public dialogue on it to the state. Until now, it's always been that. The only thing you've ever heard when it's been an arrest or a conviction is the prosecutors giving a press conference or the police chief giving a press conference. You just don't hear from the defense."

However, public interest does not necessarily warrant legal results, as Syed's case has shown. Though he was granted a retrial in 2016, two years after Serial aired, his case has since gone through several appeals. And on Friday, just two days before The Case Against's premiere, the Maryland Court of Appeals ruled that Syed would not be getting another trial. It's unclear how his case will move forward now, if at all, but for Chaudry, there's already been at least one win.

"After 9/11, lot of Muslim activists, me included, failed in trying to humanize Muslims, but Serial was able to do that," she said during a Television Critics Association press tour, per Harper's Bazaar. "[The Case Against] is gonna put a face to [Muslim] people, and as an advocate, that's a very important part of the story that has had a real impact across our community."

So while the docuseries may not have a direct affect on Syed's legal battle, it's still serving an important purpose.