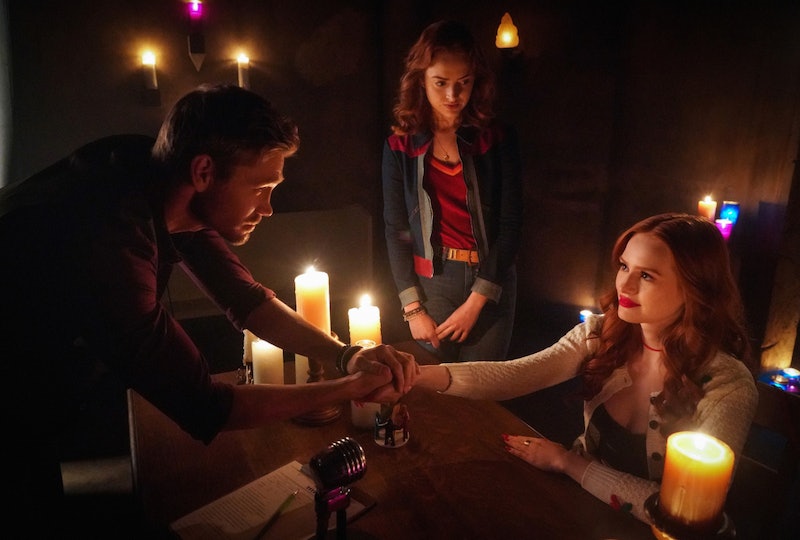 With the Gargoyle King(s) seemingly out of the picture, Edgar Evernever and the Farm have become the biggest threat in Riverdale Season 3. Betty and the gang haven't quite figured out how to stop them yet, but luckily, fan theories about the Riverdale Farm have been popping up all over the internet. Some of them sound plausible, others sound totally absurd, but on a show like this, literally anything is possible. Riverdale has been planting seeds about the mysterious cult for a long time, so whatever they're really up to, it has to be something big.

The first mention of the Farm came all the way back in Season 1, when Polly explained to Betty that she and Jason were planning on running away upstate. At the time, the Farm seemed like an idyllic place where two hopeful teens could go raise their babies in peace. But as time wore on, it became clear that the farm was actually a dangerous cult.

Now that Edgar is officially in town, we're slowly starting to find out more about the Farm's intentions. But while we wait for more conclusive answers, perhaps some of these fan theories can point us in the right direction.

She might be a little preoccupied with becoming one of Edgar's disciples, but don't forget: Alice is an investigative reporter. That's where Betty gets it from, actually. Alice has always been willing to go the extra mile to get to the bottom of a story. What happened to that moxie? Is it possible she's actually undercover, researching the misdeeds of Edgar and his Farmies from the inside? Redditor shamzy27 believes that's exactly what Alice is up to. It'd make sense, since she was opposed to Polly going to the Farm in the first place. All she has to do is keep up her charade until she can blow the story open.

2. Hal Will Save The Day

As the Black Hood, Hal Cooper is, to put it mildly, not a good guy. But he does still love his daughter, and he clearly thinks Alice was in the wrong to give Betty's college money to the Farm. Redditor akkerjunkie suggests that maybe Hal will be the one to help Betty take down Edgar for good. He's got the motivation, after all, since Edgar definitely fits Hal's definition of "a sinner." And everyone knows the Black Hood isn't above resorting to extreme measures when he thinks it's for the greater good. The only question left, then, is how Hal would get out of prison. In the beginning of the season, it didn't look like Betty would be at all willing to help him. But then again, Betty has a dark side, too...

Redditor maryssmith cooked up a fan theory just wild enough to be an actual Riverdale plot line. The theory is based around the fact that the Blossoms have a history of adopting sibling-spouses for their kids. What if Penelope gave birth to Cheryl, and then adopted Jason from the Sisters of Quiet Mercy? And what if Jason's real father happens to be Edgar Evernever? This would explain why Jason was so eager to get back to his "real" family with Polly, and why Clifford Blossom was so willing to murder his "son."

She goes one step further to suggest that Archie and Jason might actually be half brothers, if Mary Andrews had an affair with Edgar before she got together with Archie's dad, Fred. That part seems a little far out, even for Riverdale. But Jason coming back into play in Season 3? That would be classic Riverdale.

4. Edgar Evernever Is The Gargoyle King

The theory that Edgar is the Gargoyle King has been floating around since before Season 3 premiered, and it hasn't been disproven yet. There isn't a whole lot of evidence to support it other than the fact that they're both clearly bad dudes that want to gain control of the town, but even though we've already unmasked two separate Gargoyle Kings, the original one has yet to be revealed. Could it have been Edgar that was terrorizing the Midnight Club all those years ago?

Little by little, the truth about the Farm has started to be revealed. With just a handful of episodes left in Season 3, there's undoubtedly at least one last huge twist in store...