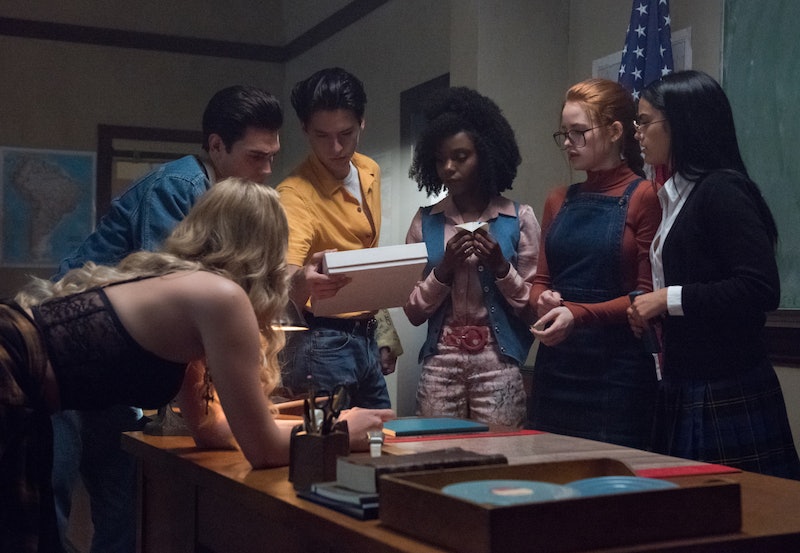 A mysterious figure known only as the Gargoyle King has been spreading terror in Riverdale's titular town, but luckily the gang that solved the murder of Jason Blossom and unearthed the identity of the Black Hood are on the case. But eagle-eyed Riverdale fans might be able to solve this mystery before the show deigns to reveal the identity of the towering figure leaving a trail of bodies in the wake of the town's Gryphons & Gargoyles games. Some of the most popular Gargoyle King theories for Riverdale Season 3 suggest that the Gargoyle King is a familiar face, but who in Riverdale would put on an elaborate costume to murder children, and why?

In an interview with Us Weekly, Riverdale showrunner Roberto Aguirre-Sacasa said that the Gargoyle King "is most probably a guy in a mask," which may be a disappointment to anyone hoping the show (much like Aguirre-Sacasa's sister show on Netflix, Chilling Adventures of Sabrina) would go into supernatural territory and introduce otherworldly beings into this small town murder mystery. He added that said guy in a mask is "probably" someone who viewers have already met. So who could it be? Here are some of the internet's best guesses.

Flashback episode "The Midnight Club" revealed that the older generation of Riverdale had their own experiences with Gryphons & Gargoyles over two decades before Dilton Doiley and Ben Button became obsessed with it. It also revealed that Penelope had been adopted by the Blossom family to be groomed as Clifford Blossom's future wife. Clifford, unhappy with Penelope making friends outside of the Blossom family, may have donned the Gargoyle King mask in the '90s to kill Principal Featherby in order to scare Penelope back into his arms.

Could the supposedly dead patriarch or his living twin brother Claudius have returned to Riverdale to reignite havoc? If so, why? The Blossom family certainly has the resources to fake deaths and create a complex murder puppet, so Clifford or Claudius may be using the Gargoyle King mask to force events in Riverdale to go in their favor.

While no one would suspect Ethel of having a violent bone in her body, a suspicious moment in a recent episode suggests that Ethel could be behind the figure known as the Gargoyle King. Reddit user GentleCritter suggested that the killer may be the least threatening person on Riverdale, Ethel Muggs, because she has a split personality that manifests as the Gargoyle King. When "she warns Bughead that they cannot tell adults about [G&G], and she becomes afraid and the [Gargoyle King] emerged: when she had a seizure her arm went straight up- THAT’S HOW SHE PUPPETEERS THE GK HEAD." Only time will tell if Ethel is really the person behind the mask — and that still wouldn't explain who the Gargoyle King was in the flashback episode — but it's clear she's already gotten far too close to Gryphons & Gargoyles.

Hiram Lodge's sinister machinations became one of the most thrilling aspects of Season 2, and Season 3 of Riverdale has only seen Hiram exercise more of his power, including faking prison riots to keep Archie miserable. During the original fatal game of Gryphons & Gargoyles, Hiram Lodge was the person who introduced the drug Fizzle Rocks to the players, and by the end of the evening Principal Featherby was dead. Did Hiram Lodge get everyone high to commit a murder? Is Hiram Lodge donning the mask again to strike terror into the people of Riverdale? We'll likely have answers by the end of the season, but given the show's track record for having killer dads, Hiram could be a safe bet.

The show usually doesn't reveal the identities of their killers until the final episodes of any given season, so it could be a long time until the Gargoyle King mask comes off. Until then, Riverdale fans seem focused on trying to determine who could be behind the mask to see if they can solve the mystery of the Gargoyle King before Archie and friends do.