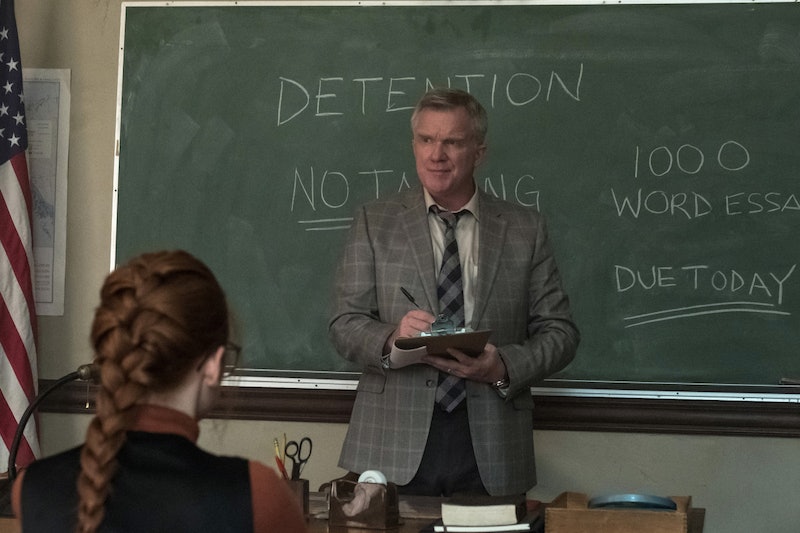 Spoilers ahead for Riverdale Season 3, Episode 4. Wednesday night's Riverdale episode finally explained some of the parents' cryptic past, but it also opened up yet another mystery: Who killed Principal Featherhead on Riverdale? The show seems to imply it was the Gargoyle King's doing, but it's more likely that the culprit is someone in the Midnight Club — a group forged (then quickly broken) during the parents' high school days.

After Betty convinces Alice to fill her in on how she knows about Griffins and Gargoyles, she recounts that the parents briefly became friends after all landing in detention, Breakfast Club-style. They discovered G&G locked in a teacher's desk and started playing, becoming so obsessed that they would sneak into school for after-hours games. One night, everyone but Alice — who was pregnant — got high. While the others were drugged out and galavanting around the school, she found two chalices in the bathroom, then stumbled across the Gargoyle King in the hallway. She fled after she saw Principal Featherhead coming into the school to investigate.

The next day, Alice found out Featherhead hadn't shown up for work, and it soon became clear he was missing. Eventually, he turned up dead with blue stained lips, and the Gargoyle King's marks were carved into the closet door where his body was found. Alice pieced together that the killer couldn't have known the principal would be there that night to find the poisoned chalices, which means whoever it was must have intended to murder one (if not all) of the Midnight Club's members — but who?

Something had been afoot since the gang was invited to "ascend" to the next level of G&G. Game master Penelope Blossom thought Daryl Doiley set it up, while Daryl assumed it was Penelope. Was one of them lying? Or could it have been Sierra? The social justice warrior and future mayor was spotted writing "End Apartheid" on the bathroom mirror in lipstick at the top of the episode, and on the night Featherhead died, Alice found similar graffiti spelling out "Flip For Your Fate" in the same place.

Then there's the possibility of Hiram, who's by now proven he's not averse to murder. He was the one who provided the drugs that night, and he was suspiciously absent from the post-mortem meeting where the Midnight Club vowed to destroy the game and made a pact never to speak of G&G again. Plus, there's the fact that he, Keller, Mantle, and Doiley got into the game independent of the Midnight Club — could they have all conspired together?

At this point, everyone is a suspect. And much as we may want to believe the Riverdale parents are innocent, all of the show's killers thus far have been evil dads (first Clifford Blossom, then Hal Cooper), so it's definitely within the realm of possibility that there's yet another murderer lurking among them. Knowing Riverdale, it will be quite some time before we get any real answers, but for now, the parent should be at the top of your suspect list.