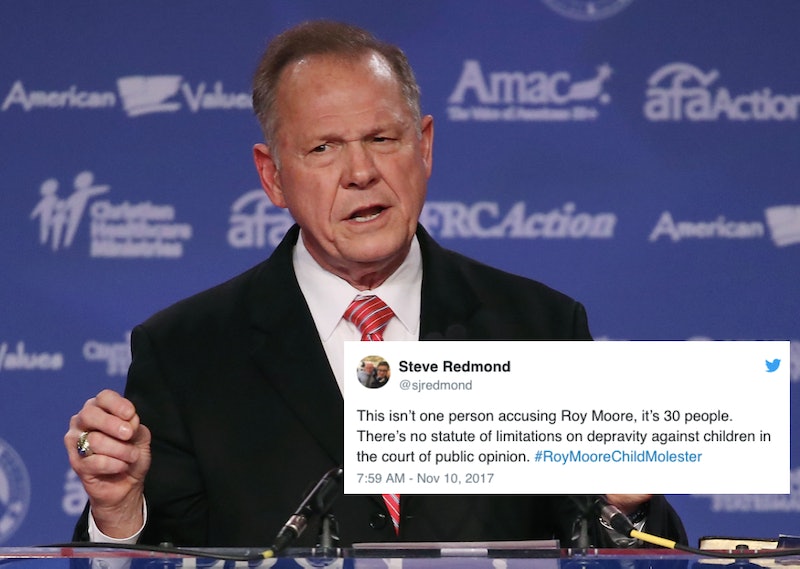 The wave of women coming forward with sexual harassment and abuse allegations has spilled over from entertainment into politics. A woman has come forward to accuse Alabama Senate candidate Roy Moore of molestation — she was 14 when she says he initiated sexual contact with her — while three others claim Moore asked them out when they were teenagers and he was in his 30s. The #RoyMooreChildMolester tweets that were trending the morning after the story broke show the huge extent of the public backlash against Moore, who has forcefully denied all of the allegations.

The hashtag was trending Friday morning in response to the scandal. On Thursday, Moore responded to the allegations in theWashington Post by insisting they were totally untrue. “These allegations are completely false and are a desperate political attack by the National Democrat Party and the Washington Post on this campaign,” Moore wrote in a statement.

"Moore's Accusers And The Democrats Are Lying!"

Some tweets from the far-right wing of the political spectrum suggest that Moore is the victim of a Democratic plot to smear him leading up to the Senate election. These Twitter users also believe Moore is innocent until proven guilty, and that his accusers are falsely saying he'd been inappropriate with them. It should be noted that the rate of false reporting is extremely low, with several studies showing only between 2 and 10 percent of all reported sexual assaults actually were false allegations.

"Roy Moore Is A Pedophile"

Some Twitter users quickly painted Moore as a hypocritical politician, because he'd long talked about morality and family values before being accused of sexually abusing a woman when she was 14 (Moore has not been charged with any crime, including child molestation).

These tweets highlight a pattern that has existed for a long time on the conservative right. Moore himself founded the Foundation for Moral Law, a conservative Christian legal advocacy group. Former House Speaker Newt Gingrich famously used Bill Clinton's adultery to launch impeachment proceedings — despite having several extra-marital affairs himself. And a number of conservative politicians who pushed anti-gay policies have been outed themselves.

Given that pattern, as well as the cultural moment we're in, it's no surprise that people would jump on the Moore scandal so quickly and forcefully. The country has a president that bragged about sexually assaulting women — before denying that he had ever done so — and the list of high-powered men who've lost their positions because of allegations of sexual harassment or assault has been growing at an alarming rate. Some Twitter users tried to make sense of the Moore scandal in that context:

Most Republican politicians haven't weighed in on whether they believe the allegations against Moore. Mitch McConnell and several other Republican senators said that they think Moore should drop out of the race if the allegations are proven true, although all of them didn't necessarily broadcast that position Twitter. The outlier is Sen. John McCain (R-AZ), who clearly called for Moore to step down:

Moore doesn't seem to have any plans to step aside, and it's unclear if the abuse allegations against him will have an effect on the race. Unless another shoe drops, the country will have to wait until the special Senate election in December to see how Moore — and Alabama voters — handles things.