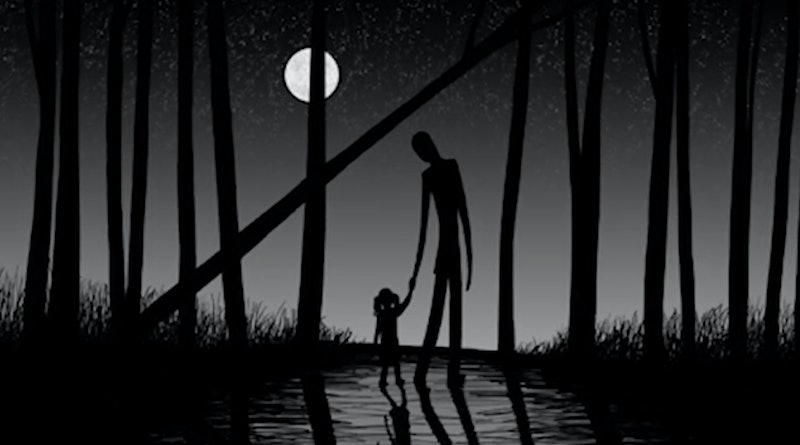 HBO's documentary Beware the Slenderman, which premieres on Monday, Jan. 23, explores the story of two adolescent girls who claimed that they stabbed their friend to please the "Slenderman," a fictional character. And even though the character originated online, the phenomenon surrounding it already has a history that spans years. In fact, many people are so interested in the online urban legend that they've written stories, posted pictures, and even made a collection of Slenderman videos that you can watch in order to better understand what captures people's imaginations.

Sadly, the two girls at the center of the documentary, Morgan Geyser and Anissa Weier, took the urban legend to an extreme and are currently awaiting trial after both pleading not guilty by reason of mental disease or defect, as reported by the Associated Press. However, most others seem to simply appreciate the scary stories, which reportedly originated with Something Awful user Eric Knudsen, who created the character with the name Victor Surge in 2009. Eventually, the figure became known as Slenderman, and there have been videos dedicated to him since his first appearance on the site.

A quick warning: while all of these examples should be safe for work, they are designed to be creepy, and so you may want the light of day, or, at least, a bright lamp, in order to make sure that you don't get too spooked.

If you need some backstory on the Slenderman, this documentary short suggests that the character is real (he's not) and that he dates back 9,000 years (he doesn't), but is a good primer on the iconic photos that helped originate the character's popularity. It's also just a good, eerie recreation of a typical documentary style.

A popular subgenre of Slenderman videos is the real-life sighting, in which a cameraperson, usually pretending to be something of a documentarian, claims to have witnessed a kidnapping or murder, inspired rather heavily by the ending of The Blair Witch Project.

This wordless, animated webseries reimagines the Slenderman as a grieving husband and father who turns to murdering innocent people in the woods after losing his family. It's an interesting backstory that proves literally any character can be humanized, even one without a face. GhostToast Animation went on to make more entries in the series, but the first short is still by far the most popular.

This video has nearly 9.5 million views, so the popularity of this legend is truly shocking. This one features supposed found footage of prankish teens punished by a cruel monster and is actually a great example of amateur short filmmaking. The way the video begins as totally realistic footage of annoying kids only to turn to horror is pretty impressive.

By far one of the most popular Slenderman videos online, this video by SA Wardega shows people reacting to being ambushed by a person in a very strange Slenderman costume and isn't really what you'd expect. Most of the reactions aren't frightened, save for one woman at the beginning of the video and one young child.

And the video game Slender attempted to capitalize on the creepy vibe of the pictures, videos, and stories about Slenderman. With its lack of light, terrifying sound design, and liberal use of jump scares, I'd say it succeeded.

From short films attempting to evoke serious, factual documentaries to animations that aim to humanize the fictional killer, there's no shortage of Slenderman videos that blur the line between reality and fantasy. As Beware the Slenderman shows, tragedy can happen when that line becomes too blurred.