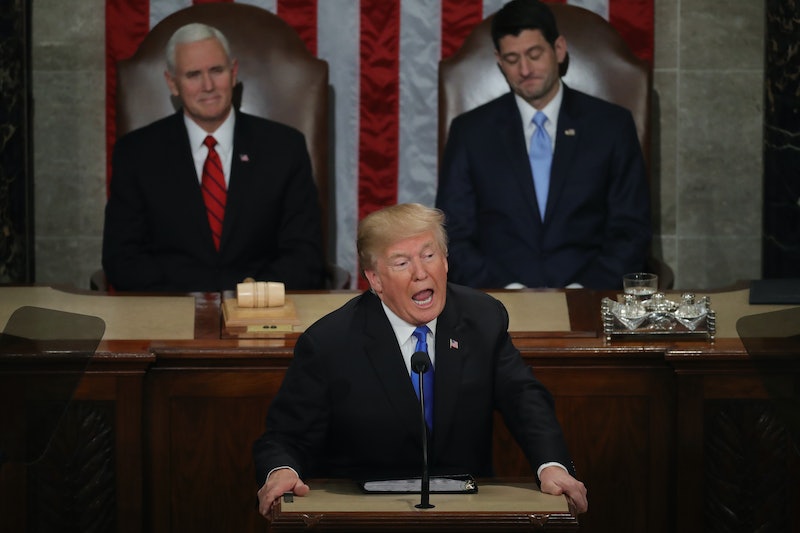 On Tuesday, President Trump completed a presidential rite of passage by delivering his first State of the Union address. After boasting of his accomplishments during his first year in office, Trump highlighted several of his administration's policy priorities for the next year, including immigration reform, infrastructure spending and continuing to fight terrorism abroad. As Trump spoke, the internet did its part as well, flooding social media with tweets and memes about Trump's 2018 State of the Union address.

In a longstanding presidential tradition, Trump spent a good chunk of the speech discussing what his administration has already done. He said that "roughly 3 million workers have already gotten tax cut bonuses" under the tax reform package that he recently signed into law, and outlined the steps his administration has taken to deregulate various American industries. The president also spoke of his judicial appointments, energy policies, and military action against ISIS in the Middle East. He added that his administration has "ended the war on clean coal."

Some on social media provided thoughtful, informed and passionate responses to the substance of the president's speech. But of course, just as many used the occasion to crack jokes and make memes about Trump's State of the Union address. Here are some of the best of the night.

The Speaker Is A Fan

From his perch behind the president, Speaker of the House Paul Ryan gazed upon Trump with approving eyes.

As of this writing, former President Obama has yet to comment on Trump's speech.

SOTU In A Nutshell

But How Do The First Kids Feel?

To be clear, there hasn't actually been any reporting on Eric and Don Jr.'s perspiration (or, perhaps, lack thereof) during the speech.

That's House Minority Whip Steny Hoyer, looking every bit as dour as, well, the rest of the Democrats in the House chamber Tuesday night.

Has anybody ever appeared more angry while applauding than Sen. Tim Kaine did during Trump's speech? He looks like he wants to strangle somebody.

Meanwhile, the award for meekest applause of the night has to go to the junior senator from Vermont, who put his hands together with the absolute smallest amount of energy possible while still qualifying as a clap.

Presidents don't get intro music in the build up to their State of the Union addresses — but maybe they should?

Slip of The Tongue

Ryan did indeed come perilously close to saying "preventing" instead of "presenting."

It's true — the tickets to the State of the Union contained a misspelling of "union," which is arguably the most important word in the phrase.

The Return of "Covfefe"

The "uniom" typo immediately entered the growing lexicon of misspellings, typos, and only partially-completed words that the Trump presidency has produced.

The Vice President and Speaker did look very, very pleased with Trump as he was giving the speech...

So That's Why He Was So Subdued

Tuesday's speech featured little of the fire-and-brimstone Trump that dominated the campaign trail and, later, the presidency. He was far calmer and quieter — so much so that some people thought he seemed sedated.

How Long Was It?

Trump's State of the Union address was supposed to last 50 minutes. It ended up stretching on for an hour and 20 minutes.

Memes and joke tweets are, of course, no substitute for legitimate commentary and analysis of a SOTU address — but that doesn't make them any less fun.