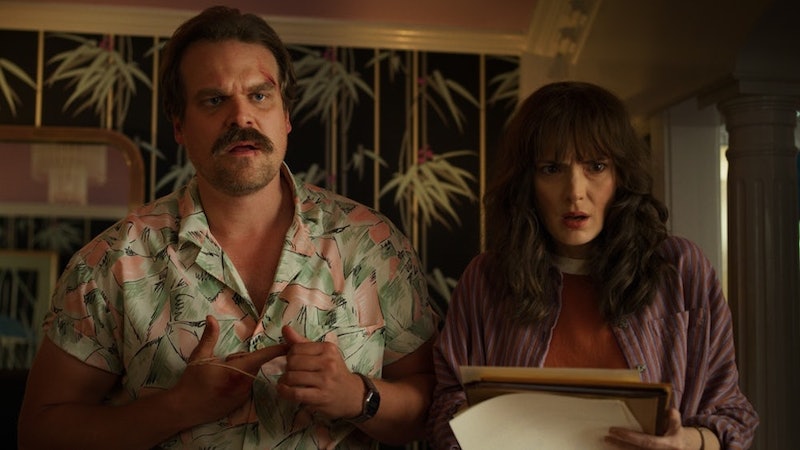 In the finale, Eleven and the gang prepare for battle against the Mind Flayer at the Starcourt mall while Joyce, Hopper, and Murray concoct a plan (completed with the help of Dusty-bun's Suzie-poo and their delightful NeverEnding Story duet) of their own to once again close the Upside Down gate, this time in the mall's underground lab. In the end, Billy — whose been possessed by the Mind Flayer to do its dirty work — is killed by the monster after Eleven brings up memories of his mom, prompting him to recall his human self and save her at the last minute. Over at the lab, Hopper presumably dies, too, after Joyce turns off the machine and sets off an explosion.

Or does he…? A cryptic end credits scene set in Russia three months later has fans convinced that everyone's favorite police chief is actually still alive and behind held captive by the Russians. But despite that glimmer of hope, everyone was still pretty devastated having to watch him (seemingly) die. Twisting the knife even further, Joyce, Will, Jonathan, and Eleven move away from Hawkins and their friends to start fresh in a new town. The finale also included a heartbreaking scene in which El reads the speech that Hopper wrote for her and Mike in the first episode of the season. Basically, it was a lot to handle, and fans are having trouble coping. Here are some of the best tweets and memes that perfectly capture all the feels.

This Arrested Development gif is the only appropriate response to Hopper writing in his letter, "But please, if you don't mind, for the sake of your poor old dad, keep the door open three inches."

There were also several before and after comparisons to watching the season:

Basically, there were a lot of tears in general.

Put simply, we are all baby.

Monetary compensation for the psychological damage inflicted during the episode is now being sought after.

The morning after is always the hardest.

Parallels were drawn to a heartbreaking moment in Avengers: Endgame that will make you hate the number three.

Fans simply do not know how to move on.

People even mourned the loss of bad boy Billy after his redemptive story arc.

They also mourned another unlikely fallen hero and his love of Slurpees.

Cherry and strawberry Slurpees will never be the same.

Some fans are now planning a trip to Russia to right a heartbreaking wrong.

Others vowed to make a stop at their local convenience store to pay their respects.

Despite all the sadness, however, fans still had hope.

More like this
'Stranger Things' Season 4 Volume 2 Trailer Teases New Episodes Coming July 1
By Grace Wehniainen and Gabrielle Bondi
Who Could Die In The Stranger Things Season 4 Finale?
By Kadin Burnett
10 Iconic Erica Sinclair Quotes From Stranger Things That Steal The Show
By Sophie McEvoy
'Stranger Things' Star Joe Keery Ditches The Upside-Down With New Single "Change"
By Radhika Menon
Get Even More From Bustle — Sign Up For The Newsletter