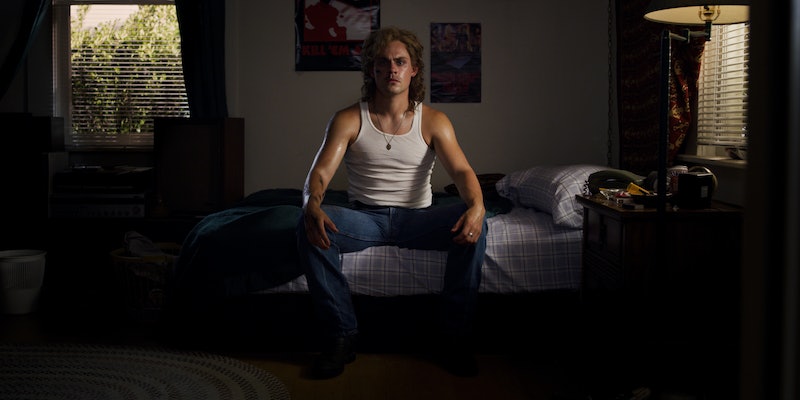 Spoilers ahead for Stranger Things 3. He may have already been Hawkins' resident bad guy, but what the Mind Flayer does to Billy in Stranger Things 3 makes him a literal monster. His encounter with the inter-dimensional creature happens similarly to the way Will got trapped in the Upside Down in Season 1: he's driving down a dark road when he has a sudden "accident" right in front of the Mind Flayer’s lair. Billy is understandably frantic and tries to escape, but the Mind Flayer pulls him in and takes over his body.

Throughout the season, Billy still looks physically the same (albeit a bit sweaty and sick), but his high body temperature, sensitivity to sunlight, and thirst for chemicals soon draws Eleven's suspicions to him, despite Max assuring her nothing is wrong. The day after Billy is possessed by the Mindflayer — something we don't actually see happen to him, but do see happen to the people he recruits — Billy wanders around the pool where he's working as a lifeguard in a confused stupor. Eventually, he's able to get a better grasp on himself and start acting like a functioning, semi-normal (though even creepier) version of himself, and go about kidnapping more people for the Mind Flayer's growing army. Billy is, essentially, the human embodiment of the monster, mindlessly carrying out his marching orders — that is, until Eleven is able to get through to the small part of the real Billy still inhabiting his body.

While using her powers to invade Billy's mind and find out where he and the Flayed are hiding, she sees flashes of his life: first, him as a happy kid playing on a beach with his mom, then him as a sad young boy when his mom leaves in order to escape her abusive marriage, leaving Billy with his violent father and shaping him to the angry teen we met him as in Season 2. During the final face-off with the Mind Flayer, as Billy is about to hand over Eleven to the monster so it can kill her, she brings up these memories. It seems to shake Billy, if temporarily, back into consciousness, and he sacrifices himself in order to save Eleven. So while Billy is once again an antagonist this season, he still gets to redeem himself with one last heroic act.

It's never made clear if the Mind Flayer chose Billy specifically or if he was just in the wrong place at the wrong time, though it would make sense if it was intentional: Billy is Max's stepbrother, which gives him easy access to Eleven, the only thing who can stop the Mind Flayer from taking over Hawkins. If the Flayed's goal was to become large enough to kill Eleven, why not choose a leader who has close ties to her? Besides, Billy didn't have the best reputation around town, so his sketchy behavior didn't raise many red flags.

It would have been interesting to see what kind of person Billy could have become if he survived this season, but at least fans know that there was some semblance of good inside of him. He may not be remembered as a hero like Hopper, but he's a part of the reason why Eleven will carry on to possibly fight for Hawkins in the future.