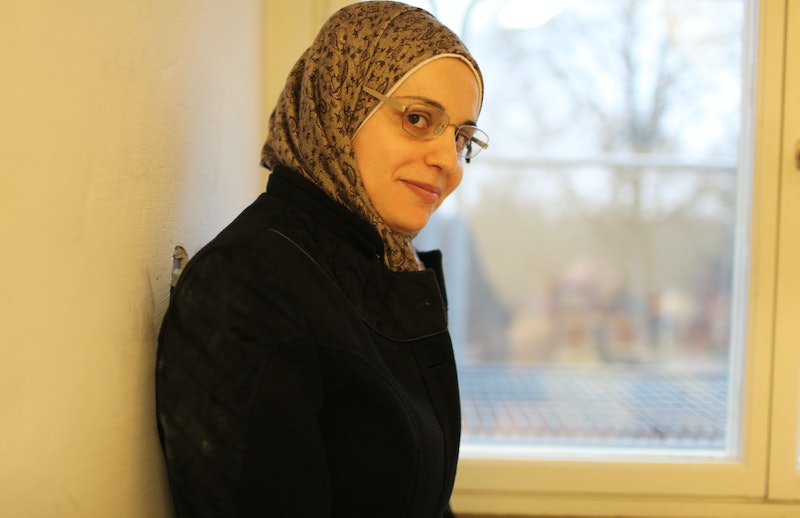 As the crisis in Syria continues to escalate, refugees are fleeing by the masses, when they can, to surrounding countries and Europe. Since the start of the Syrian Civil War, it is estimated that around 450,000 Syrians have died and more than 11 million have been displaced from their homes, according to a December USA Today report. Several European countries, local organizations, and the international community have been providing assistance to those fleeing the violence — and Sweden has emerged as one of the most generous. In 2015 alone, the Sweden took in 160,000 asylum seekers.

However, the country is dealing with the strain of taking in a massive number of refugees and passed new regulations last year that limit refugees to temporary residency permits. Syrian refugees may find a relatively welcoming home, but there are still many hardships ahead for them, even in Sweden.

Saving Syrian refugees is especially important to me. My paternal grandfather, Ibrahim Hamzawi, was Syria's minister of justice as well as mayor of Damascus in the 1960s. He and the rest of my father’s family were fortunate to escape and take refuge in America and France before the civil war broke out. My stepmother's family, on the other hand, grew up in one of the poorer areas where most of her family worked in construction. At least half of her family has been tortured and killed, and several have taken refuge in Turkey.

Support Group Network is one of the major organizations in Sweden helping to integrate, guide, and empower Syrians. It was established in 2014 and consists of 16 major asylum camps located all over Sweden. I visited Support Group Network in December 2016 and early January 2017, going to the original location in Vanersborg, Sweden to collaborate with the organization and met with five refugees from Syria.

Fleeing Syria was only the first challenge for these refugees. They have sacrificed everything to escape war and now they are stuck in limbo between waiting to hear or see their loved ones. Learning Swedish is a significant barrier for them and trying to enter the labor market is another. The photos and stories below portray some of their experiences and conditions as refugees.

My father sold everything he owned to take us and come here. Most of my uncles live in Saudi Arabia, one lives in Poland, and I have an uncle in America. Most of my family and friends have moved away from Syria. One time, my uncle and his son were caught by the government over there. But they were eventually released. No other harm has come to my family as we all left in time.

Most of the men in the army that were fighting with the government escaped and left because they saw how horrible it was to be there. The danger of being in my age group (18 to 45) in Syria is that they will immediately take me and force me to be part of the army if I live there. Because of this, nobody in my age group wants to live in Damascus. Now, Damascus is mostly female. For women it’s not as much a problem. For men, it’s problem. The only other option for us is to become a rebel.

Xedar Sizar and Nabo Boza moved with their two boys to Sweden Oct. 1, 2015. Both are originally from Aleppo.

Xedar Sizar​: Most of my family is in Aleppo. Besides my husband and kids here, my family is my father and mother and one brother who all live near there. We have contact with them every few days. We receive all news, including deaths, through Facebook. I have lost my sister and her three children. They died from ISIS. When ISIS came to my family’s village, they used my family as a shield.

Nabo Boza​: I lost 68 people in the war, most from ISIS. Of these, eight were children. Our hometown is currently invaded by ISIS because there are Kurdish people who live there. We came to Sweden from Lebanon and then to Turkey by boat illegally. We applied when we got here as you can not apply in your own country. There is no official way. Sweden allowed us to apply and what was unique is that they don’t turn away people. All their cases are accepted. I am hoping to find work in my field (metal devices) and we are in the process of waiting to go to school to learn Swedish. We are currently waiting as well to move into an apartment via immigration.

I’ve lived in Sweden now one year and two months. I live by myself. I have three boys that live close by with their families. My wife and daughter are still in Damascus. They will not be taken by the military as they are women... but, the whole situation is very dangerous. There are bombings and kidnappings happening everywhere.

The path to Sweden was very difficult and costly.

We have heard about people getting killed for trying to cross the border, so, yes, I am very afraid for them. It costs a lot of money to leave Syria and since we are Palestinian-Syrian, it’s not easy to cross borders. Syrians have the ability to go to an airport and fly or walk to Turkey if they have the means to do so. But, Palestinian-Syrians are given a temporary passport; not a Syrian passport. [Editor's Note: In place of a passport, Palestinian-Syrians have travel documents. With some countries not recognizing them as citizens of Syria, complications can arise when traveling or when requesting asylum.] They can only stay in Damascus and it's hard to even leave Damascus.

The prayer room refugees have made in the Support Group Network home in Sweden.

The path to Sweden was very difficult and costly. I paid around $5,150 total to arrive to each place. I was able to do all of this because I borrowed money from a friend in Lebanon. Every month I pay $110 to him and another $110 to my family through Western Union in Syria. It’s the most I can provide at the time based on the budget I receive from Immigration here in Sweden.

There was one pregnant woman and I tried my best to help her breathe because she was getting suffocated.

From Damascus to the border of Turkey was about $1,500. Once there, I had to pay $400 to go through the border and then $1,200 to take the “boat of death” between Turkey and Greece. I stayed in Turkey for about 10 days waiting for the small air boat, and once it was our time to go, they arranged us in groups of 50 to 70.

Where some of the Syrian refugees in the Support Group Network live.

When I finally reached Vienna, Austria, I felt I was officially in Europe. I was immediately greeted by the police, Red Cross and NGOs. We were able to bathe, we were given shoes, we were offered help to locate our next destination, and one girl from an NGO even gave me her phone to keep as mine had been stolen.

I talk to my wife and daughter over in Syria on Whatsapp every day. They are somewhat safe but live on the outskirts of Damascus. I have moved them five times. Every house we have lived in has been destroyed and everything has been stolen, including the windows, window panes, television, carpets and so on as they sell all this in the black market in Damascus.

Sweden is a very good country, and the Swedes are very good people. It is hard for me to find work as I have to learn Swedish. Fortunately, Immigration pays for my language classes, so that is what I am working on now. I have applied for my wife and daughter to come here a while ago, but now we have to wait. Here in Sweden, the only hard thing is you have to wait. Everything here takes time and requires a lot of patience. I am happy because I am near my sons but I am very sad because I am far away from my family in Syria. I am very sad because I have no job here.

I am married, and we came together in December of 2015. I am from a city next to Aleppo. I still have my father, my mother, two of my brothers and one of my sisters that remain there.

What triggered me to come to Sweden came from the fact that my city is a hot spot for attacks. I was a teacher at a school, and I lost seven children last year. That was so bad. Then, I got pregnant, and one day there was an air attack. I ran as fast as I could away and fell on the way. My baby died from that. It was three months old. That’s when we decided we had to leave.

We knew it was dangerous, but by then, staying in Syria would have been the same.

We walked for six hours before we reached the border of Turkey. From there we took the “boat of death” to Greece. We knew it was dangerous, but by then, staying in Syria would have been the same. We lost our friends, our neighbors. We were watching death.

We have been living in Sweden now for 10 months. Unfortunately, we are not working yet because we haven’t found a job and because we don’t know Swedish yet. Immigration is supporting us in the meantime.

We have to work hard to start from scratch. It’s okay to live here. But the problem is we have to wait a lot.

I am happy that I am safe here, and we have started to make friends. The only problem we have is we have been here for a year and we are still waiting. We were told we are not sure we can find a house here so we might have to move to another city and then we have to start again. We have to work hard to start from scratch. It’s OK to live here. But the problem is we have to wait a lot. We have been one year, and we have not done anything.

I​ have lived here since 2015 with my wife. Before coming here, I worked with multiple things in Syria, including as an apartment manager and in a bread shop. We left Syria after the air raid in our town and because they were trying to make me join the army. Three of my brothers live there. The third brother was kidnapped and tortured to death. One of his 3-year-old daughters was killed from a bomb.

My sister is still in Damascus in a hot spot for air raids, but I cannot move her here. I talk to her often over there. There is no safety for anyone’s life over there. I am very grateful to be here in Sweden with my wife. I am looking for work every day and trying to learn Swedish.