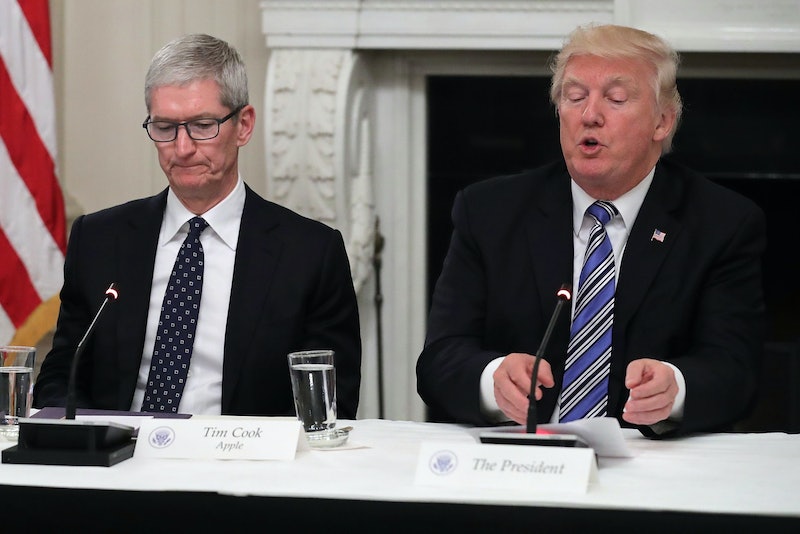 President Donald Trump met with tech CEOs again on Monday, some six months after the initial get-together during the transition. The vibe, however, was definitely off this time around, as tension and conflict have grown between the White House and Silicon Valley during these first months of the Trump administration. Tech leaders did meet with Trump, but their concerns were literally visible.

And by literally, I mean that you could see it on their faces. Twitter went wild with photos of Amazon's Jeff Bezos, Microsoft's Satya Nadella, and Apple CEO Tim Cook looking serious at best and troubled at worst — all the while seated next to a man with a big smile plastered on his face. The Huffington Post reported it was as if "only one person wanted to be there" — that would be Trump. Of course, no one has any way of knowing for certain what the tech leaders were actually thinking.

None of those seemingly sour looks are surprising given the disagreement between these business leaders and the president and his administration. Since that brief moment of unity between Washington and Silicon Valley in December at Trump Tower, the relationship has appeared to have gone downhill. Trump has been busy pushing an agenda that has angered many in the tech industry with regards to immigration, trans rights, the Paris climate deal, and more.

The community largely decided, however, that it was better to show up to the first meeting of the American Technology Council and try to influence Trump than to sit it out and protest the administration, CNN reported. There are two reasons: 1. The tech industry, according to CNN, would like to help modernize government tech, and 2. The CEOs hope that they can influence the president.

For example, Axios reported on Apple CEO Cook's planned talking points with the president. They include immigration, encryption, veterans' affairs, and human rights — both at home and abroad. In a recent interview with Bloomberg, Cook explained his reasoning for sticking around, even if he doesn't agree with Trump:

He added, "I'm not a person who’s going to walk away and say, 'If you don't do what I want, I leave.'" One example he gave to Bloomberg was veterans' affairs, noting that Apple has some experience that could be useful.

I could give a crap about the politics of it. I want to help veterans. My dad's a veteran. My brother served. We have so many military folks in Apple. These folks deserve great health care. So we’re going to keep helping.

Whether Cook or any of the others will get through to Trump is another story. The president opened the meeting by saying, "Our goal is to lead a sweeping transformation of the federal government's technology that will deliver dramatically better services for citizens ... Government needs to catch up with the technology revolution." While everyone can probably agree to that, putting this shift in motion could prove difficult.

And all the more so if half the players at the table find it tough to turn their frowns upside down. The ball is in Trump's court on that one. Let's hope he heeds the advice on climate, immigration, and more. He sure needs it.

More like this
Why Can’t I Go Live On Instagram?
By Emma Carey
TikTok’s “Miley Stewart Summer” Trend Will Make You So Nostalgic
By Courtney Young
How To Add Music To An Instagram Post
By Emma Carey
Using Your Pet’s Name As A Password? Here’s Why You Might Want To Change It
By Cristina Sanza
Get Even More From Bustle — Sign Up For The Newsletter