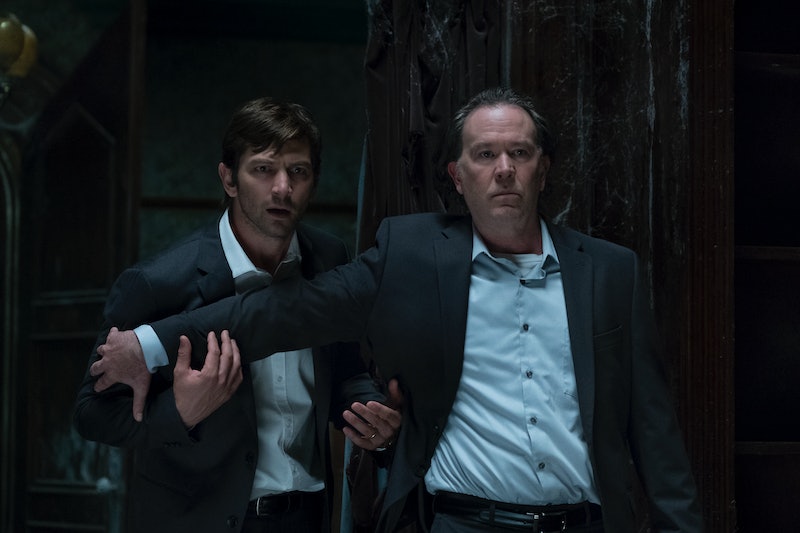 There really isn't another show like The Haunting of Hill House on TV right now. The hit series currently has a 91 percent fresh score on Rotten Tomatoes, and it's been called the first great horror TV show by some critics and fans. More importantly, people just can't seem to get the series out of their heads. There are even The Haunting of Hill House ending theories that take what viewers watched in the final episode, and flip it on its head by suggesting that everything wasn't as happy as it seemed for the Crain family. Spoilers ahead.

Surprisingly, The Haunting of Hill House does appear to have a happy ending. Nell sadly died, and so did Hugh, the kids' father. But aside from those tragic losses, the rest of the family live on to reach sweet milestones that they (and the viewers) didn't think would come. In the final shot, it's revealed that Steve and his wife, Leigh, are starting a family, Luke is celebrating his two-year sobriety anniversary, Shirley and Kevin are still together, and Theo gives up her gloves and commits to a romantic relationship. It's all a little too nice, if you ask some horror fans.

However, if you believe these The Haunting of Hill House theories, then that happy ending might not actually be so happy after all.

1. Steve Is Going To Move Back To Hill House

At the end of the season, Hugh tells Steven that he's now in charge of the house, leaving it where it is uninhabited, in the hopes that it rots and dies. This would mean no one would be able to fall prey to Hill House ever again, but Twitter user @TheSaharBar tweeted out an interesting idea. What if Steven goes back to live in Hill House in hopes of writing another bestseller (and maybe trying to free his family members from the house's grip once and for all). It's not super plausible, given the explicit warning from his father — and the fact that he lived through the hell the house caused before — but it would be an interesting way to revisit that ending which saw Nell, Hugh, and Olivia together in the Red Room.

2. The Black Mold Attracted The Family And It's Not Done Yet

There have been many theories that the house wasn't actually haunted, but instead the black mold was making them all go insane and hallucinate what viewers watched. However, that doesn't make sense, just for the fact that the Dudleys' didn't live there, and they were able to see Abigail. That being said, what if the mold did have a role to play in the family's arrival and inability to stay away? Reddit user CyberToaster, theorized that the mold is some sort of "parasitic ancient life form" that's capable of luring families to Hill House. If that's the case, then the place won't stay empty for long.

3. Hill House Isn't Evil, But Rather A House For Evil

Another theory found on Reddit, this time from user EmperorJoker, is that the house isn't the source of the evil that wreaked havoc on the Crain family, but instead, the house is a "prison" of sorts for evil spirits. The theory goes on to say Hill House is meant to contain spirits who wish to do others harm, and the deaths in the Crain family weren't due to the house, but instead the evil spirits who live within it's walls.

Deconstructing this theory is interesting, because a lot of the spirits fans saw didn't seem evil. One was a child, and another one was a bedridden old woman. The only ghost that can be seen as malicious was maybe Poppy, but who's to say she wasn't driven mad by the house just like Olivia.

Of course, the audience never saw any spirits try to help the Crains. If the end of this theory is also correct, then once the house rots, as Hugh wanted, those spirits can then go free. This would make for a terrifying end, but also an interesting plot point for a later season, perhaps.

4. The House Is Still Hungry For The Crains

So, one of the creepiest moments in that last episode, if you look closely, is Olivia's eyes as she's reunited with Hugh. He had just revealed to Steve that he died to save Luke by appeasing his deceased wife, and now he's off to join her and Nell. While this seems bittersweet, Olivia's deviously empty glare says otherwise.

Olivia died believing that her children needed to die in order to be "saved" from the darkness of the world. Is she really content with Hugh giving himself over instead? If that look means anything, she might not stop until her whole family is deceased, which would make Season 2 rather interesting, and possibly more of a mind-trip. Speaking of a mind trips...

As mentioned before, the ending for The Haunting of Hill House is definitely a relatively happy one. Despite Nell and Hugh's deaths, all the other siblings survive and have uplifting stories. They're thriving, really, when it leaves off. But could things really be that happy for this beleaguered family?

In an interview with The Wrap, Oliver Jackson-Cohen, who plays adult Luke, revealed an essential tidbit about the Red Room. “Every, uh — again, I feel like I have to be careful if I'm saying this right," he said, laughingly. "But whenever each child, each sibling, is in the Red Room, something in the fantasy is red. And it'll be a very, very small thing." This is an interesting, creative fact to point out, only it's not just a nugget of insider information.

Jackson-Cohen then pointed out that Kate Siegel, who plays adult Theo, noticed that Luke's sobriety anniversary cake in the finale was, you guessed it, red. They couldn't handle what that could potentially imply, and when they went to director and co-writer Mike Flanagan, he was dubious as hell. He answered with an, "I don't know!"

Jackson-Cohen can't tell if the theory that the entire family is trapped in the Red Room "could have legs," or not. But it's definitely a chilling one to contemplate. Either way, this last one might be the most compelling and plausible Haunting of Hill House ending theory of them all.