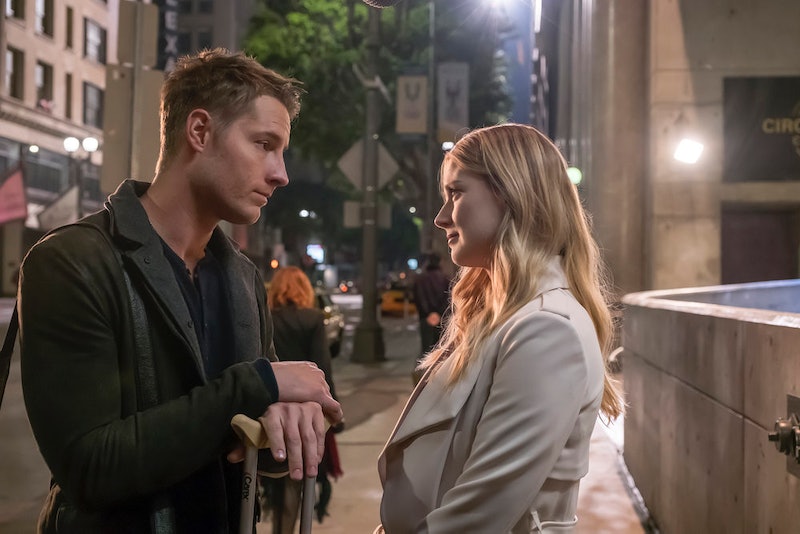 It's only been a season, and already the Pearsons feel enough like family that I'd accept any and all holiday invitations they'd like to send my way. This Is Us is a certified hit with viewers of all ages; it's probably brought quite a few families together in front of the TV every week. But since the This Is Us first season finale is airing March 14, over the next few months, that bonding will have to happen over anticipating Season 2. NBC announced during the show's Television Critics Association panel that they'd picked up This Is Us for Season 2 and 3, according to Variety. What does next season have in store for TV's favorite family? These This Is Us Season 2 spoilers hint that the show has barely scratched the surface of all the stories it wants to tell.

With so many rich characters and so much time to play with, This Is Us has an incredible amount of potential material. Personally, I'd love to see Kate in a professional setting, since most of her Season 1 has dealt with her love life. I want to see Randall following through on his promise to live more like William did and how Sophie and Kevin broke up in the first place. And the first set of episodes shared very little about Rebecca, pre-Jack. Season 2 will probably premiere in the fall, so it's a work in progress. But these spoilers from the cast and creative team tease some potential This Is Us plotlines.

More Of Jack's Fate Will Be Revealed

Though the penultimate episode of the season made it appear as though Jack might be making a fatal mistake getting in the car after a few drinks to drive out to Rebecca's band's Cleveland show, This Is Us creator Dan Fogelman told TVLine that the Season 1 finale may not come through with a definitive "how" on the subject of Jack's death. “In terms of seeing the moment where something happened to Jack, that’s a little ways away,” Fogelman said. "We’ll get a lot of that information [in the finale], but the real story of it will play out not in the near, near future." So Season 2 will feature more unpacking of this catastrophic event in the history of the Pearsons.

The Show Will Continue To Play With Time

At the show's panel at the Television Critics Association winter press tour this year, Fogelman said that expanding the rules of the show to enable characters to meet on some plane other than reality — such as Randall's drug trip and dream — ensures that This Is Us will "never run out of stories." (Per The Hollywood Reporter.) That conceit also ensures that characters who've passed away in the main timeline can continue to be an active part of the show. And not just Jack either. Ron Cephas Jones confirmed to Entertainment Weekly that he'll be back in Season 2 as William, even though Randall said goodbye to his biological father during their Memphis road trip.

When Variety polled the cast of This Is Us about what stories they'd like the show to explore in Season 2, both Mandy Moore and Chrissy Metz made their plea for some explanation of how Rebecca and Jack's best friend Miguel became a couple. And Moore, Metz, Sterling K. Brown, Ron Cephas Jones, and Susan Kelechi Watson put in requests both for more backstory about Beth and Randall as a couple and for Beth as an individual. "I’d also love to see a whole episode about Beth," Moore said. "What does she do? Where does she come from?" Fortunately, the actor who plays that intriguing character told Variety that Beth will get some of the spotlight in Season 2. It makes it exciting to go into Seasons 2 and 3," Kelechi Watson said. "And know we’re going to explore Beth’s life more."

Ricky Could Be Back In The Picture

In a "Memphis" post-episode interview with TVGuide, executive producer and director Glenn Ficarra said that he'd like to pull a prominent figure from William's young life back into the orbit of the Pearsons in Season 2. He teased an episode that would show fans more of William and Ricky's close friendship and musical collaboration or a present-day Ricky (Brian Tyree Henry) visiting with Randall to tell him more about his dad back in the day.

These spoilers are enticing, but This Is Us has a knack for surprising its audience. So don't expect them to give it all away in advance.