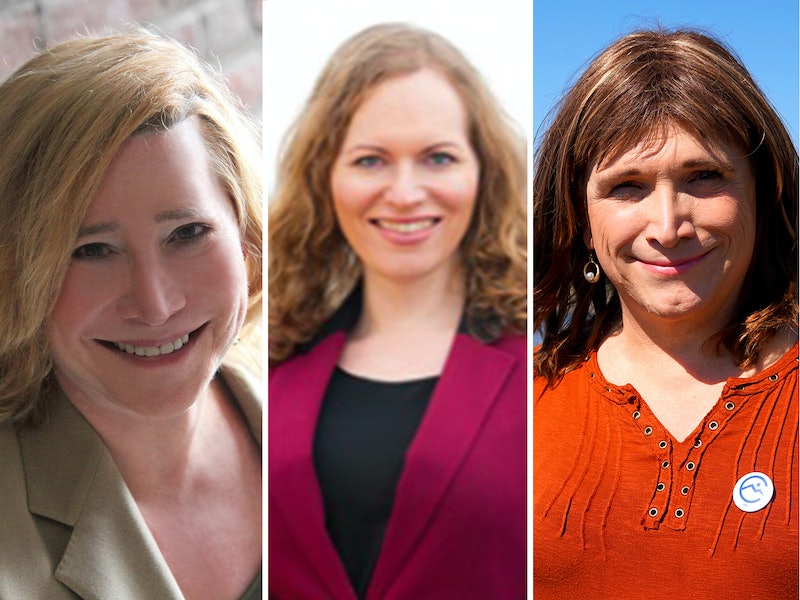 Alexandra Chandler doesn't shy away from discussing her gender identity on the campaign trail — but she says it doesn't define her as a congressional candidate. The 40-year-old former Naval Intelligence analyst is vying for an open seat in the U.S. House representing Massachusetts, and she joins a record number of transgender candidates running in 2018 for elected office.

"I spend a lot more time talking about North Korea and Iran these days than I do about being transgender," Chandler says. "I completely own all of my identity and my past, and I have not one ounce of shame. But at the same time, we’re going to talk about the issues that affect everyone in the district."

Chandler would be the first openly transgender member of Congress if elected. Just seven months ago, Danica Roem became the first openly transgender person to win a statewide race and be seated; seven other transgender candidates across the country were elected to office the same day. Those victories propelled roughly 40 transgender candidates to throw their hats in the political ring this year. But while many progressives are excited about seeing these more diverse ballots, three trans candidates tell Bustle they'd much rather talk about climate change, public health, or foreign affairs than dwell on gender identity.

Roem's historic campaign gained national attention last year in part because the 33-year-old was challenging Virginia's self-described "chief homophobe." Though she didn't shy away from discussing her gender identity, Roem's platform focused on local issues such as congested roads and jobs. Ethan Damon, Roem's former campaign manager, tells Bustle that approach is ultimately what drove her to win a seat in the Virginia House of Delegates (Roem's office did not make her available for an interview).

Women already face an uphill battle when running for office, as studies have shown that voters stereotype male candidates as more knowledgeable and trustworthy. Voters stereotype LGBTQ candidates too: Researchers have found that men are less likely than women to vote for a lesbian candidate. Similar research focused on transgender candidates is unavailable, but candidates like Chandler, a transgender woman who's also gay, may run up against multiple stereotypes.

That hasn't stopped them from running. Dana Beyer is taking her fourth crack at elected office, and from her point of view, the outlook for trans candidates has vastly improved over the past decade. Now a 66-year-old retired surgeon and civil rights activist vying for a seat in the Maryland state Senate, Beyer says she's never been disrespected on the campaign trail.

Politics wasn't always so welcoming, though. Back in 2008, when she was working in the office of a Montgomery County Council member and trying to pass an anti-discrimination bill, Beyer says she received hate mail and death threats because of her gender identity.

"You’ve always had that in this country — an underlying level of consistent bigotry with discomfort of the 'other.' It’s always been there," Beyer says.

But she can tell this year is different.

"People are so angry with the Republicans that they will vote for anybody who’s not a Republican," she says. "That too is progress."

Hallquist and Chandler say they haven't faced transphobic comments in person while campaigning, either. The internet is a different story — "But who reads the comment section, really?" asks Chandler. Of course, their experiences could be very different if, say, they were running in more conservative states that didn't have anti-discrimination laws in place.

The two candidates say the topic of gender identity still comes up occasionally, in the form of questions like What does being transgender mean to you? or What does that mean you bring as a candidate? When asked something along those lines, Chandler says she shares her experience transitioning to highlight her resilience.

Chandler transitioned in 2006 while working in Naval Intelligence under the Bush administration. She recalls that when another employee suggested at an office town hall that she should be fired, half an auditorium of people applauded.

Chandler believes this anecdote illustrates how she'll stand up for Massachusetts residents in Congress.

"If that’s my behavior when that’s happening in that room, then you can trust me in that room in Washington D.C. to not yield, to not shrink back, and to fight for you," she tells voters.

Hallquist similarly talks about her transition as a sign of strength. When Vermont voters ask her about challenging an incumbent Republican governor, she often replies: "It’s not the biggest challenge I’ve faced."

"When you think about transitioning, and all the fears that I had, and the shame and the guilt... it doesn’t look that hard," she tells Bustle.

It's possible that come November, Hallquist, Chandler, and Beyer could be a part of two historic political shakeups: a record number of women winning elected office and a record number of transgender candidates winning elected office. Whether or not the dozens of trans candidates running this year are successful, they're already setting the stage for others to run in 2020 and beyond.

"I see that political power is being built among communities that have had little or none, and that alone has the potential to do so much for this country in the coming years, in the coming decades," Chandler says. "This is just the beginning."