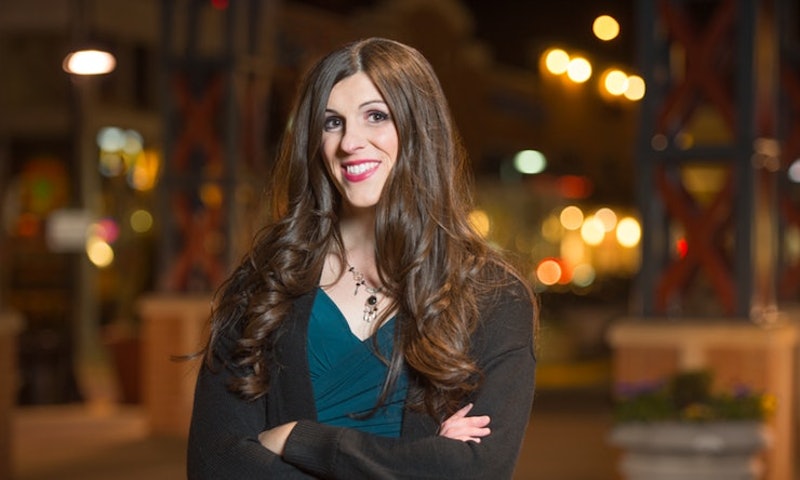 The election received significant national attention despite being a local race. As an opportunity to unseat a far-right conservative who'd held his seat for decades, many liberals hoped that Roem's victory could be symbolic and aspirational in the age of Trump. She was endorsed by the likes of the Human Rights Campaign and Joe Biden.

Roem campaigned on improving transportation infrastructure, especially to fix traffic problems; expanding Medicaid; raising the state minimum wage; and reforming the public education system, including raising teacher salaries. She also made social justice a focus of her campaign and spoke often about being an open trans woman.

"Your identity shouldn’t be a hindrance to you running because you are a person," Roem told Bustle last week. "You are part of the human experience just as much as any cisgender, straight white male is which is the overwhelming majority of our legislature here in Virginia."

Roem knocked on doors all over the community during the campaign. She has vowed to do the same thing when she serves in the legislature, saying that she wants to ask locals for their opinions on land-use policies before she drafts them.

As part of Virginia's House of Delegates, Roem will help write and pass state laws. The House of Delegates and the Senate of Virginia are the two chambers that make up the state's legislature, called the Virginia General Assembly. Roem is one of 100 newly-elected delegates, who will all serve terms of two years.

Roem is a journalist who works for The Gainesville Times. She credits her job for teaching her about "what works and what doesn't in government," as she explained on a Ballotpedia survey. Working as a reporter also gave her detailed knowledge about Marshall, her opponent.

"I know his record inside and out," she told Bustle. "I know his strengths and weaknesses."

Roem beat Marshall despite the fact that incumbent candidates have a high rate of success in Virginia. In fact, in 2015 every single General Assembly incumbent won reelection.

In January, Marshall infamously created the anti-LGBTQ bathroom bill "House Bill 1612," which stated that students had to use school bathrooms that matched their "original birth certificate." The bill failed to pass.

Marshall purposefully misgendered Roem throughout the campaign. "Why do you call Danica a female?" he asked a reporter in September. "Did Danica’s DNA change?" Marshall has called himself the state's "chief homophobe."

"When you attack me with rhetoric like that, it’s not just me you’re doing that to. You’re doing it to kids," Roem told Bustle. "We didn't even mention his name or the attack. We’re going to respond to this with an upbeat, inspirational ad that tells LGBT kids that they can succeed because of who they are, not despite of it."

Anti-trans rhetoric was present throughout the campaign and came from many sources, not just from Marshall himself. The Washington D.C.-based conservative think tank American Principles Project called voters with automated messages that said, for example, "Danica Roem supports policy that requires schools to allow boys to play on girls’ sports teams and compete in girls’ leagues. Does this make you more or less likely to support Danica?" Roem called the messages "anti-trans robocall[s]."

Roem is one of just a few openly transgender elected officials in the country. Another is Andrea Jenkins, who was also elected on Tuesday as a representative for Ward 8 on the Minneapolis City Council.

Tuesday's elections brought a host of victories for Democratic candidates. One year after Donald Trump's victory against Hillary Clinton in the 2016 presidential race, these local elections offered an opportunity for voters to reject President Trump and the agenda he's pursued since his inauguration.