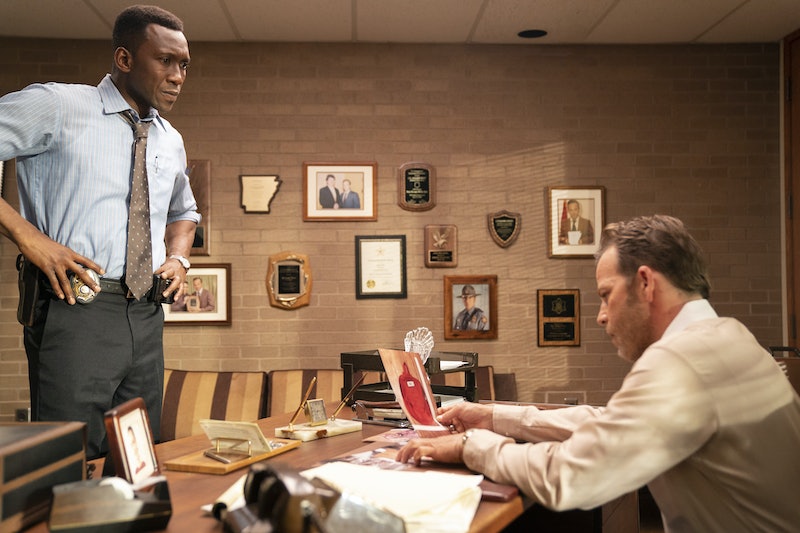 It may only take an hour every week to view a new episode of True Detective, but for some viewers the experience of watching a new season of the anthology mystery series is a 24/7 experience. As they have in seasons past, true True Detective detectives have taken to the internet to try and guess where the season could possibly be going next. While not every True Detective Season 3 fan theory will be correct, some of them simply seem too plausible to ignore and could help viewers crack the mystery of the Purcell disappearance ahead of Wayne Hays and Roland West.

At the end of episode 5, Wayne and Roland — across three separate timelines — are dealing with the aftermath of the Woodard Altercation in 1980, investigating a disturbing voicemail left from someone who could be Julie Purcell swearing that Tom Purcell is not her real father in 1990, and setting aside their past to try and uncover the full truth behind the Purcell disappearance in 2015. There have been hints of a police cover-up and suggestions of a larger conspiracy, but what is really going on? Here are some of the biggest fan theories going around the internet related to True Detective Season 3.

Hoyt Foods Is Responsible For Everything

There are many theories swirling around that the Hoyt Food company, mentioned by multiple people throughout town as one of the area's biggest job providers, is ultimately responsible for Julie Purcell's disappearance. These theories range in motive — some claim that Julie was kidnapped to replace a deceased granddaughter, others claim that Julie really is the Hoyt patriarch's daughter and not Tom's, and some believe the Hoyt's sponsor a vigilante group that saves children from dangerous circumstances, such as the tumultuous Purcell house or sketchy uncles like Dan O'Brien.

Whatever the motive, people seem to agree that the suspicious things happening in the Purcell investigation — such as the sudden announcement of a reward that leads to a great deal of false information or the suppression of evidence — are related to tampering of a powerful person, and there is no force more powerful in the world of True Detective Season 3 than the Hoyts. If the Hoyts are behind this, then there is truly no one that Wayne or Roland can trust — from the Priest to Patty Faber — because they could all be in the family's pocket.

Wayne and Roland Killed Someone In 1990

It's beginning to look like the events in 1990 that Wayne desperately wanted to keep under wraps, in whatever memories from that year still exist in his mind, revolve around someone's death. Eagle-eyed fans noticed that during his hallucination in Season 4, along with the ghosts of many Viet Kong soldiers he presumably killed in Vietnam, there were two men with bullet wounds. One was a larger man with a wound on his forehead, matching the gunshot that Wayne left Woodard with that killed him. The other figure was a man wearing a suit with a gunshot wound on his chest, suggesting that Wayne will take at least one more life before the series ends.

In 2015, Wayne is asked if he knows what happened to Harris James, an officer that processed the Woodard scene but went missing in 1990. For some fans, including reddit user LocalStigmatic, that's enough to deduce that Harris James was killed by Wayne, possibly because Wayne discovered that Harris was involved with the cover-up of Julie's disappearance and for framing Woodard. It's also possible that the figure is Dan O'Brien, the questionable uncle who may have cut a peephole to Julie's room in her house who went missing in 1990 and whose bones were found sometime before 2015. Either way, it's clear Wayne will be getting some more blood on his hands before the season's end.

One Of The Hays' Is Sleeping With The Reporter

Wayne's decision to speak to filmmaker Elisa about the Purcell case is a curious choice, especially for someone who seems to have something they're trying to hide. However, Elisa may know even more than she lets on. Reddit user Carl_Everett points out that in episode 3, Elisa seems to be hiding someone when Wayne comes to her hotel room, and user Arkeband suggests that Wayne's son, Henry, and Elisa seem very familiar for two people that don't have much reason to talk.

They believe that Henry and Elisa are sleeping together and that Elisa is getting information from Henry — but it's user njbeck that takes this theory to the next level by suggesting that Elisa is seeing Wayne's estranged daughter Becca. njbeck finds a connection between the fact that Wayne was told Becca is living in Los Angeles and Elisa coming from California. Was it Becca who told Elisa about her father's story and inspired the documentary in the first place? More importantly — what do Becca and Henry know about their father's life that Wayne has forgotten?

While these fan theories explain some of the largest gaps in True Detective Season 3 so far, there are still plenty of questions that fans simply don't have enough information to ask, and surely a few questions that fans don't even know they're supposed to be asking yet. Until then, however, these fan theories will have to be enough for fans to pore over until the next episode comes out.