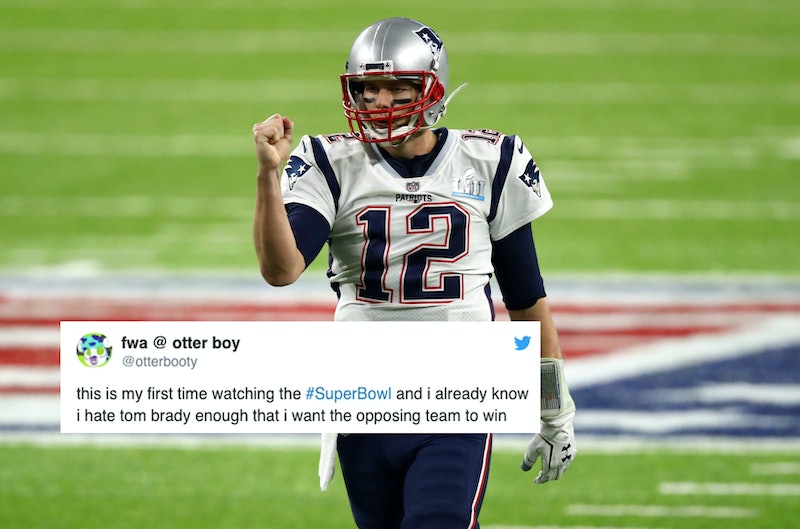 Tom Brady, football legend and the New England Patriots' star quarterback, didn't have his most stellar Super Bowl ever this year. Sure, he still performed well, but he also made some flubs, including missing one particularly game-changing pass. It's easy for people to root against Brady for the same reason it's easy to hate the Patriots: They're really talented and win often ... and it's fun to support the underdog. So, Twitter didn't miss the chance to troll Tom Brady during the 2018 Super Bowl with tweets throughout the game.

That missed pass provided particularly rich fodder for trolls. During the game's second quarter, the Patriots attempted a trick play (i.e. a move that's intended to fool the other team so that they employ the wrong defensive move) but failed, thanks to Brady. Wide receiver Danny Amendola threw him a pass to make first down, but he didn't catch it.

But others are just throwing general shade at Brady, making fun of his appearance, mannerisms, and even his name. The jokes have gotten pretty absurd, so it's worth checking them out, even if you're a Brady fan. Here are some of the many tweets making fun of the legendary quarterback, from the outright cruel and inappropriate to the hilarious.

Hold Your Own Helmet, Dude, You're An Adult

Next time Brady's ripping it up on the field, some people want you to remember that he's really just a helpless baby animal.

Straight Up Celebrating His Pain

Brady is known for having a very restrictive diet. He even published a book about it in September, The TB 12 Method: How to Achieve a Lifetime of Sustained Peak Performance, which argues for the importance of "proper nutrition," as well as "brain exercises" and a "holistic lifestyle." Wonder if there's a chapter on how to cope with the pain of losing.

This is a photo of Brady arriving at the Super Bowl earlier.

Or Is It Brady The Assassin?

Not nice at all.

In 2015, Brady was involved in a scandal sometimes referred to as "Deflategate," in which it was alleged that the Patriots deliberately deflated footballs during a playoff game against the Indianapolis Colts to make it easier for Brady to punt them. After an investigation, Brady was briefly suspended and the Patriots were fined.

A Ready-Made Excuse for Deflategate 2.0

The Super Bowl this year took place in the U.S. Bank Stadium in Minneapolis, a city that's notorious for chilly weather. Cold temperatures do actually affect air pressure; they can cause tires to deflate, for example. Brady should've jumped on this convenient opportunity! Ah well.

Some people decided this as soon as they learned Brady was all buddy-buddy with Trump during the 2016 election season.

In a story that sounds too absurd to be true, yet somehow is, Brady's jersey was stolen from the locker room while he was playing a game in Houston and then recovered in Mexico by the freaking F.B.I. Us normal folk are generally limited to the lost and found — or at most, an unpromising police report — but when Brady's missing an article of clothing, the department of justice gets involved. And then solves the case like it's no big deal. Now, especially after his team lost, some Twitter users just can't even with him.